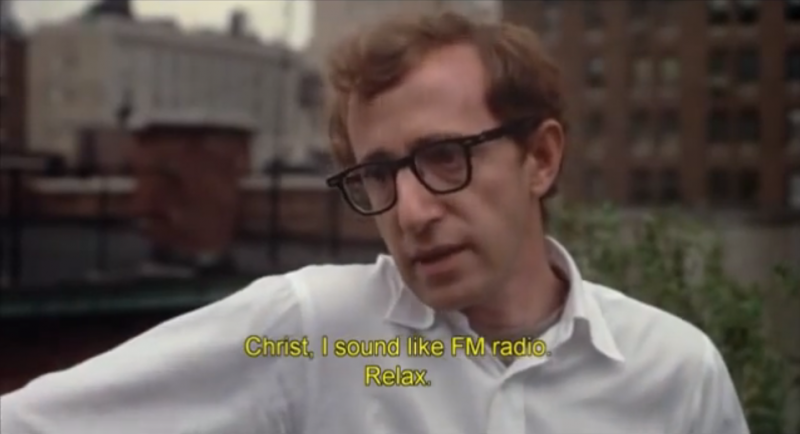 Translation experiments both within and across media may extend back to synaesthetic notions of the "systematic derangement of the senses" and continue today with subtitle hacking, neobenshi, and various modes of transcoding data for poetic or apoetic purposes.  As a brand of "actually existing conceptualism" (a term I prefer over "conceptualism in the wild"), translation gags are part of, and even perhaps may form an essential core of, the comic deformation of given meaning.  The show 30 Rockhas had translation and subtitling jokes in German, French, Spanish, Arabic, Chinese, Greek, Dutch, Sicilian, Gaelic, Polish and Latin, in addition to the more up-to-date parodies of auto-correct and voice recognition, as well as classic mondegreen and ideolectical humor (à la Gracie Allen and Eva Gabor).  The site TV Tropes has a long list of translation conventions, both comedic and otherwise, including "the completely unnecessary translator," "dub -induced plot hole," and "my hovercraft is full of eels."

So for every high-conceptual artwork that operates in this area, there might be a few hundred (or thousand) similar experiments, given the wide availability of digitized films, text-for-video applications, and increased bandwidth for storing and distributing the resultant mash-ups.  For example, here is one of Brandon Downing's translation/culture jams that use as their source material Bollywood musicals and forgotten cinematic oddities.[1]

Yet one can also do a similar mashup very simply with a web 2.0 application called Bombay TV: 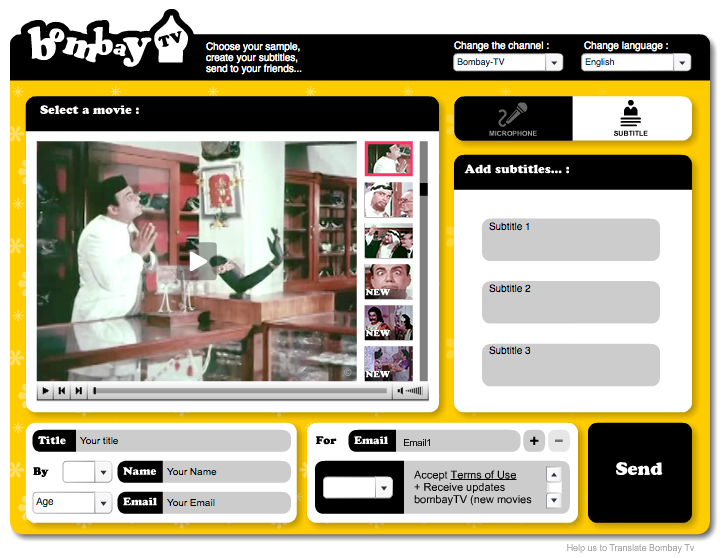 What follows is a gallery that shows the wide range of experiments that, in fooling around with the "verbocentrism" of the media image, create new transjectories for meaning.  Some of these works explicitly play around with the expectations and technologies of translation (rewritten .srt files, expanded DVD translation menus, detourned dubbing).  Some, in exploiting the innate tendency for sound to "magnetize" the image, redirect what Michel Chion calls "added value" of the soundtrack, so that the translation may be one that brings out latent or potential content previously unnoted (or even non-existent) in the image.

In Alfred Leslie's durational classic The Last Clean Shirt, we see the same footage of a drive in a convertible repeated three times, with poetic and absurd subtitles—written by Frank O'Hara—appearing in the second and third instances.  This footage is used as the launching point for a play on miscommunication between the sexes much darker and funnier than the more well-known instance from Woody Allen's Annie Hall.

While Olivier Brossard in Jacket points to this film as a harbinger of hypertextual communication to come, what he could not have known in 2003 was how prescient the iterative, serial processes of translating the same source material over and over could be.

The DVD-magazine Wolphin, in expanding the possibilities of what DVDs could do (for example, their menu pages, if left running unattended, turned out to reveal that they were films in themselves), practiced this type of serial translation on three different foreign sitcoms.  The source materials were already in a sense translations—rip-offs of well known US comedies "The Jeffersons" (issue 1), "Bewitched" (issue 2), and "Married with Children" (issue 4), with four to five sets of subtitles for each one.   The creative mutation and mutual interpenetration of intellectual properties across borders may be an instance of what Haroldo de Campos called the "plagiotropy" of the translational text, a notion—like his anthropophagic transcreations—that unsettles the assumed power dynamics between originator and appropriator. 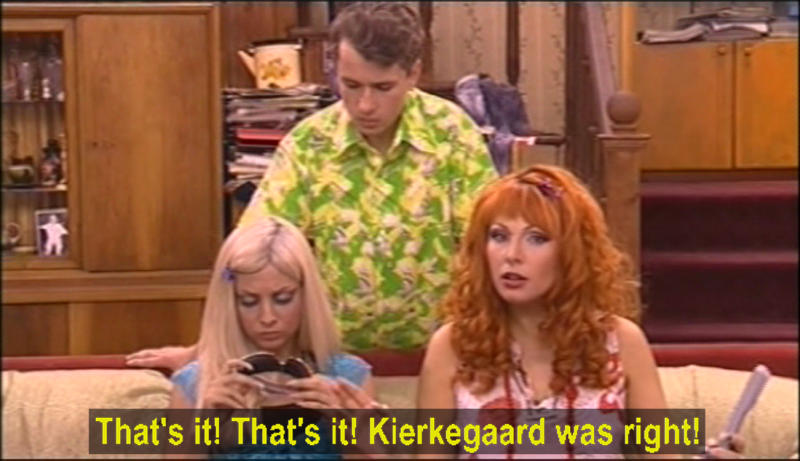 There's a point where serial translation crosses a line into something like a new state of matter, when the original source media becomes so overfamiliar that it becomes a blank page, and the transformative techniques so formulaic that a creative process turns into an app.  We can see this process taking place as the thousands of subtitled remixes of a now infamous bunker meltdown scene from the German film Downfall, with Bruno Ganz playing Hitler, inspire a "Make Your Own Hitler Video" tool.  In this third or fourth order translation, what gets transferred is not the original meaning, but rather all the comic possibilities for missing meaning; replay after replay may even get at a Benjaminian deeper meaning.  For example, when recontextualized as such, many of the cut-aways of the Downfall bunker scene reveal how little difference there is between the visual tropes of a serious historical film and a typical episode of Hogan's Heroes. 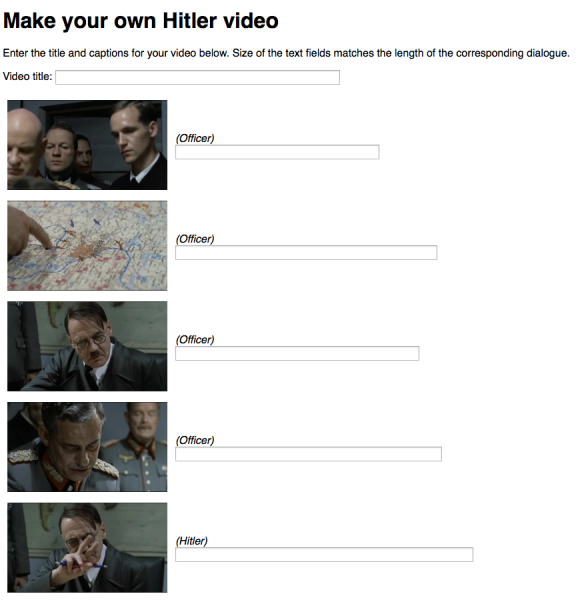 In many ways, this type of work may seem utterly new; however, in the temporality of media fashions, they are already quite old.[2]  Contemporaneous with the devil-may-care appropriation of Flarf from the aughts, which accompanied the ascendancy of remix media and its fight against outmoded intellectual property strictures, we are now perhaps experiencing a resurgence of anti-postmodern sentiment, primarily the resituating of "appropriation" no longer as the bricolage of the underdog, but instead as tool of oppression.  In future posts, we'll talk about what Judith Goldman has described as the "radical ambivalence" around the politics of appropriation in these types of cross-culture-jamming translation works, perhaps extending back (at least) to Edward FitzGerald's translation of the Rubáiyát of Omar Khayyám.[3]  It may be that the tired discourses around translational "fidelty" have now transformed into questions of appropriation, setting new parameters for translational ethics.  All the above examples flirt with a kind of inappropriate parody, yet it is ironic, for instance, that in the case of the Downfall films, the complaint that the remixers were running roughshod over highly sensitive material seems to be a cynical one mobilized by copyright holders Constantin Films, justifying their campaign against the Downfall parodies of Youtube, and causing one ventriloquized Führer to lament, "I thought we were free to make fun of Hitler on the Internet."

It seems that these types of experiments are both more complicated (and sometimes more simple) than the politicized claims against them might suggest.  For example, does René Viénet's Can Dialectics Break Bricks—in its détournement of a Chinese film about an anti-colonialist struggle of Koreans against the Japanese—just reassert cultural stereotypes or create new dialectical meaning, effectively recharging the historical themes that, if they were not already erased by generic flattening, would be lost in translation for western audiences?

In Peter Rose's Secondary Currents, when subtitles for a non-existent foreign film, in an entirely invented language, turn into concrete poetry, what is this saying about the utopian possibilities of meaning that we think of as "secondary" to the original text?

Are these types of experiments no more or less than extensions of, say, John Candy doing Pepi Longsocks—in which the joke relies on a translation of the mistranslation?

(here, the joke on fast and cheap dubbing for international distribution perhaps finds its modern analog in the "one-line multilanguage" meme, which tracks all existent dubs of huge global properties—mostly Disney animations—and assembles supercuts that find some conceptual comedy—intended or not—in the differences between iterations.  The question of intentional comedy runs deep, as a notable discrepancy between what seems to be said and what is said in any poorly dubbed media is bound to create a sense of comic bathos; for example, the voice actors who do the bad English dubs of NHK World News give performances that verge on self-parody.)

Are these bellwethers of global capital?  Or, in parodying the translational impulse in itself, are they dramatizing the ultimate impossibility of abstracting meaning for such wide global transfer?

Much closer to home, these types of works can point, however humorously, to the demoralization of political discourse and the impasses of even the most "authoritative" pronouncements to produce recognizable meaning.

The producers of Bad Lip Reading have remained anonymous, even with their millions of viewers; however there are plenty of less-intentionally anonymous artists who take advantage of what is, in effect, a now fairly basic and accessible media process.  While there is no app for it, the technology behind even the highly polished BLR videos seems to be no more than a ProTools sequence, synced to a QuickTime video, with live audio input and Auto-Tune.

There might be a kind of semiotic greed that these new processes inspire, and it easily can generate quite unfunny or callow work.  I'm reminded of the moment from Brad Neely's classic neobenshi of Harry Potter and the Sorcerer's Stone, in which muggles oogling a snake in the Reptile House may be an apt metaphor for what not to do with the rich trove of media available for translational manipulations:  "A giant Burmese leopard-eating snake basked in front of their piggish faces like a poem.  And of course they want it to dance for them."

1. While these gallery posts will be light on commentary, it is useful here to point out that Downing's work, like Stalling's, comes out of a strong connection to and understanding of the original materials. For example, the original musical number from Miss Mary (1957) has what seems to be a mother-in-law musically competing with her daughter's husband, in a contest that literally replays the power dynamics of dubbing, with the western presence of a piano serving as a notable third party in the contest. While alternately changing her loyalties from daughter to wife, the woman who is the object of this struggle does not change her dance from song to song, but rather remains receptive to each recoding instance. So when Brandon Downing adds his own version "An unmarked body's/ A dark body,/ Better for provoking drama,/ Your mighty badass changes/ turn to ghoulish armour" he seems to be self-reflexive about his own transformative process, and implicitly aware that this fourth recoding both repeats the violence in the first instances ("Move with the world/'tis a new era./To Blame men, is a time-worn song!") and potentially extends it.

2. A more recent example of this process is found in the "El Risitas" subtitling meme, which currently seems to have attracted a mostly tech-geek constituency, perhaps indication that this method of cultural commentary has "jumped the shark."

3. With neobenshi, this appropriation is not merely of content, but also process, given the Asian origins of traditional benshi. Yet the original tradition hearkens back to the more international silent film era—before U.S. film-making established its cultural dominance. Because silent films did not include recorded, spoken language, foreign and domestic films could mingle more indiscriminately—an imagistic restoration of a lost Babel—while sound accompaniments (whether narration or musical performance) varied from theater to theater.