While I feel hard-pressed to finish what I had planned for this column within the time allotted, time is on my side—or lack thereof.  One area that remains unexplored is the ways in which theories of artificial intelligence impact translation, especially given the huge impact of machine translation technologies.  Forgoing the sense of translation, no longer routed through consciousness, one can embrace an inhuman speed which, while riddled with non-sense may evolve unforeseen sensibilities and new forms of intelligence—while still attending to the situatedness of the agent, bodies, and intelligence itself.

Already within traditional translation theory, speed and its relation to presumed intelligence and the body of the translator is an issue: in his account of “the translation wars” surrounding the works of Tolstoy and Dostoevsky, David Remnick notes of the legendary Constance Garnett that “She worked with such speed, with such an eye toward the finish line, that when she came across a word or a phrase that she couldn’t make sense of she would skip it and move on.”  Gayatri Spivak, countering received wisdom from more finicky (or in her account, too critical) translators, claims that a careful translation need not be a slow one, although an ethical translation for her should be invested with a kind of erotic relation.  Now, however, in the world of machine translation, a different quality of speed is involved that diminishes that of Spivak and makes Garnett seem positively OCD in comparison. 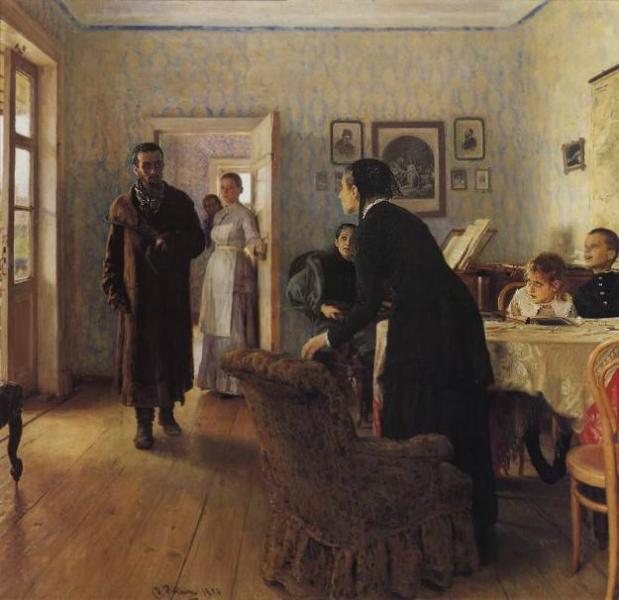 (Ilya Repin's Didn't Expect, which has been used as a cover image for Garnett translations of both Dostoevsky's Crime and Punishment and The Dispossessed, is here translated by word.camera.)

For Hsia Yü, whatever ethics or erotics or error-otics are to be found in her machine translations do not have the glow of some global humanist sensuality.  Rather, her relation to the machine poet is fraught with sexual danger.  As she describes her encounter with the (now defunct) Sherlock translator:

It does away with all connections; it flickers and scintillates; it breaks out in bouts and every now and then it distorts; it flaunts the boldness and self-confidence of someone who is always in the right, but it doesn't intervene. It races, never stopping to think. It simply reacts, reacts automatically. You can't blame it for a being rough around the edges. . . . I feel a new romance coming on with this automated translation software, my machine poet. And what really turns me on is that, like any lethal lover, it announces from the very beginning that it is not to be trusted . . .

Perhaps this description of machine translator as dangerous lover is a symptomatic hypostatization (or mistranslation) of Derrida’s “une ‘bonne’ traduction doit toujours abuser”—with an abusive lover taking the place of a merely useless one.[1]  Nevertheless, we could say that in Pink Noise, her erotic relation to the unreadable produces another type of readability—in much the same way that emergent AI works not by replicating the rational functioning of a master intelligence, but rather by networking modular elements in novel arrays with more unpredictable “sociality.”  And here, the emergent, transductive principles of her work not only devolve upon her use of the translation engine, but also are part and parcel of the way the book itself operates.  The pages of Pink Noise are transparent celloid—creating dense overlays of texts forging unpredictable and unreplicatable combinations.  It takes some doing to see a page purely in isolation from the other pages, or in isolation from the world around and behind.  Even the reader and his/her backdrop is part of the palette—since these transparent pages are also reflective.  The noise of her machine translations is complemented by this indeterminate play of light and image that this text’s materiality authorizes.

At one point in her text Yü proposes an installation, which seems to make a reference back to Searle’s Chinese room thought experiment—replacing Searle’s room with Proust’s hermetically sealed phantasmagoria. Searle’s classic proposition demonstrates that an isolated agent trained to translate Chinese by following a set of syntactical and symbolic rules, while producing a passable Chinese still does not “know” Chinese; his philosophical image is meant to challenge the notion that machine AI has consciousness (or that human consciousness is, conversely, just a type of mechanical processing that need only be fully understood to be perfected).  For artists like Yü, this question of consciousness (as well as “authentic Chinese”) may be beside the point—for, after all, even if a computer can pass the Turing Test with basic English-to-Chinese translations, it still has a long way to go before it can emulate Proust.[2]  Her aesthetic pleasure might be in the failure of attaining this consciousness, or challenging how consciousness is perceived. The obstacle, more than anything, may be our image of intelligence rather than intelligence itself.

For example, how would a machine understand or emulate the consciousness of a child?  What limits would infant babble provide for a perfected machine translator or perhaps a Siri-enhanced baby monitor? Robert Twomey’s installation-essay “Searle’s Room” takes these issues around our presumed perceptions of machine intelligence and applies them to a translational problem that defies both (adult) human and machine knowledge. He has collected the non-speech proto-language of infants (from publicly available YouTube videos), and parsed and programmed these sounds so that they randomly output to an automatic speech recognition tool (which of course is trained to interpret articulate speech and not children’s babble.)  The subsequent “translation” then is used to select a subimage from a database of children’s drawings—activating a machine reminiscent of Kafka’s harrow, redrawing the children’s drawings in bursts of a jerking inscriptional apparatus.  Twomey's Searle’s Room may be no Romper Room, but rather a chamber torturing out machine meaning from something less capturable. Like Searle, Twomey offers a humanist or even familial image of the limits of artificial intelligence, even though the uncanny charms of this bachelor machine may compete with more familiar arrangements of meaning.  This twittering mechatronic assemblage, arrayed around an image of the Rosetta stone—which refers back to the colonial history of translation, but also, within the history of AI, to the orientalist imagery of Chinese rooms and mechanical Turks—is meant to question the idea that abstract symbolic manipulation is the only thing that counts as knowledge.

Christopher Vandegrift's work similarly exposes some of the ideological and technical limits of machine learning and voice recognition technology, generating poetic material through iterative, emergent procedures.  In Recursive Dictation, he uses a feedback loop between a system voice and voice detection to, as he says, “probe the contours” of a closed system.  If the Siri system is set up to create a personalized, utilitarian profile based on its user's choices, the current vernacular, and a mutating database, what happens when one starts with the blank slate of purely machine input, asking the machine to learn from itself? 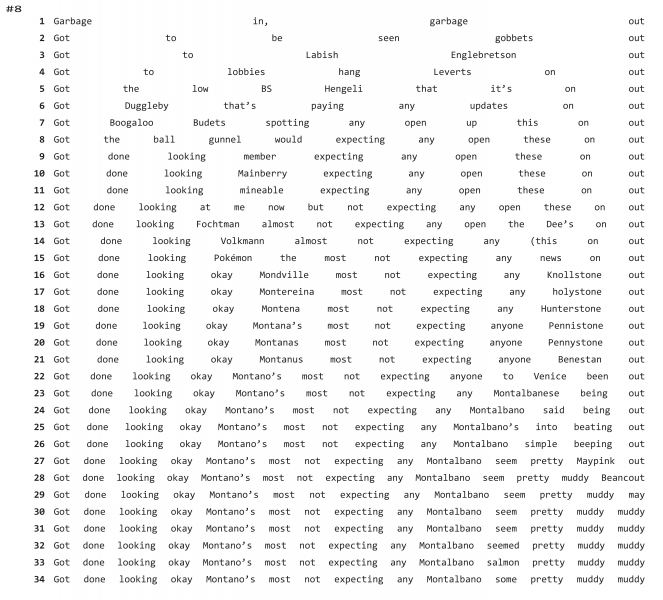 Whether the machine produces poetry is of course up to the poet to decide.  The machine may be able to detect common speech, but only the human operator can select what—within the machine's malfunctioning—counts as poetry.  The proper domain of the “human” translator, to reiterate a Benjaminian theme, is the untranslatable.  Everything else is just the mirror of information.

Non-mimetic, non-self-replicating processes in the realm of translation return language to the creative energies of an emergent system, rather than one controlled and managed by master operators.  In Brian Conley’s Decipherment of Linear X, the emergent processes of “insect language” become a pataphysical metaphor for human communication.

In Decipherment of Linear X, Conley has painstakingly catalogued what he at first assumed was a significant archeological discovery—pieces of wood he found in upstate New York, scored with what he believed to be a strange calligraphy.  It turns out that this mysterious script was merely the trace of beetle larvae forging asemic tunnels in wood fiber.  Yet this did not deter his research process.  In fact, he compiled a dossier of academic articles from experts in various fields who were asked to treat this finding seriously.  Luc Steels’ “Gallery Structure Formation in Conleyborus Scarabaeoides” specifically explores the ways in which the marks of the “Conley beetles,” in their chance similarities to Minoan Linear A and B, perhaps share similar primitive semiotic origins “as the emergent side effect[s] of self-organising processes.”  The chance similarity between Minoan language and beetle scribble turns out to be their origin in environmentally-constrained chance itself.  A diabolical concept for traditional translation theory.

The proposition that the “book of nature” is ultimately translatable (or transducable) depends on the notion that nature is like a book and not a cellular automaton.

Previous sentence as it appears in Jonathan Basile's Library of Babel

If the latter, then the analogy between emergent artificial intelligences and human knowledge becomes real, and the “book of nature” rather than the ultimate non-fiction, becomes an elaborate aleatoric construction to enjoy—a flower of the mind, part but not apart from nature.[3]  Appropriately, then, the final essay of Conley's dossier is Borges' “The Library of Babel.”

1. Philip E. Lewis in “The Measure of Translation Effects” unpacks the cross-cultural dilemmas concerning the term “abusive translation”—which to English ears comes off as a more unconscionable concept.

2. Yü’s Recherche would route French into Chinese and come back with “every line self-destructing and regenerating at the same time[.]  Sentences within sentences like doors within doors, cellars within cellars, through layer after layer of intricately folded bits of this and that, describing yet another intricately layered medley.”  Maybe exploring the chaotic properties of these types of botched translations reveals that Sherlock is both far from Proust, and already Proustian.

3. See also Conley's WAR! project—which is a live translation-simulation of battle by way of cartoon sounds.  In the same way that in Decipherment an absurd, merely playful proposition turns up something essential to scientific knowledge, here the impossible translation of war via cartoon sounds shows how the thing translated has already been subsumed by a texture of abstractions and cultural signifiers.  That is, there is something about the semiotics of electronicized warfare, or at least our distant reception of it, that may be no more than a text that is immanently translatable by the mobilization of these comic sounds. His absurd system partakes of the operational qualities of the actual, translated system so that the simulation becomes (sur)real.