Jean Paulhan was the son of a doctor and had been Dr. Toulouse’s assistant for some time, working on the review Demain. By 1923, he had become Jacques Rivière’s assistant and was working on one of the most famous literary journals in Paris, the Nouvelle Revue Française. Perhaps Artaud’s editing relationship with Paulhan, which would last for the rest of their lives,[1] led Artaud to send several poems to Jacques Rivière for consideration. Rivière sent one of the friendliest rejections imaginable—inviting Artaud to stop by his office some Friday afternoon so the two could talk. After Artaud paid him a visit, the men took up a correspondence that spanned almost a year—from 1923 to 1924.

In his letters, Jacques Rivière maintained that the poems Artaud sent contained “awkward passages and disconcerting oddities,” and that they had not, on the whole, “achieved a sufficiently unified impression.”[2] Still, Rivière was charmed by something in Artaud’s work—its potential, perhaps, or the force of Artaud’s spirit—that led him to encourage the young poet. “With a little patience,” Rivière wrote, “even if this simply means cutting out some of the divergent imagery or traits, you will be able to write perfectly coherent, harmonious poems.”[3]

For his part, Artaud continued to argue that what Rivière termed “awkward passages” were in fact the product of a “fearful mental disease” that “caused these poems not to be, could not be different than they were, despite the ability within [Artaud] to polish them to the utmost perfection.”[4] Artaud’s poems were artifacts of his illness. This auto-ethnographic, documentary approach makes sense, given Artaud’s work with Dr. Toulouse and the mixing of artistic work and psychiatry in Demain. On another level, though, Artaud’s argument, as Samuel Delaney outlines it, “parallels one that anybody who has ever taught creative writing has gotten at least once from the belligerent student who has had his (it is almost always a he) work criticized and is unhappy about it: ‘What you call my mistakes aren’t that at all. They’re exactly what I intended to do. The uncomfortable awkward effects they produce were what I wanted. They document how I was feeling about it all when I wrote it. You just didn’t understand that. But now that you do, don’t you think it’s better than you did?’”[5] Delaney points out that, in this case, the one difference between the student and Artaud is that Artaud attributes his literary deficiency to illness rather than intention. 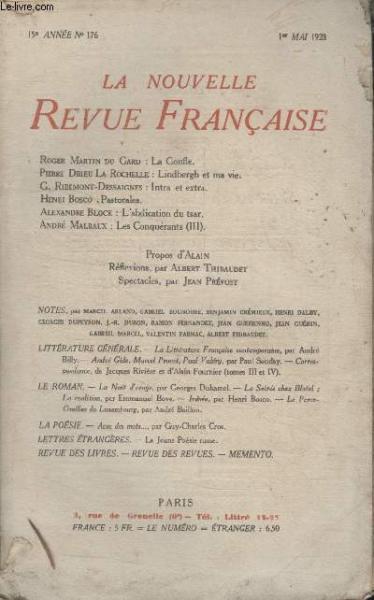 Still, by arguing for a literary enactment of a fractured mental state, Artaud is making a case for modernism. These letters, then, along with the poem “Cri,” all of which were eventually published in the Nouvelle Revue Française, are a tremendous set of cultural artifacts. The Romantic ideal is based on assumptions of, to borrow from Delaney again, “the unproblematic transparency between life and language, presentation and representation, intention and effect, and our ability to locate and respond to the ‘parts’ of themselves, as well as a psychological autonomy and a psychological malleability to the subject represented that flies in the face of practically any materialist critique.”[6] Artaud’s work—Artaud’s life—is an attempt to infuse language with the unrealized aspects of life—with the bodily experience of fragmentation. Or, as Stephen Barber explains it, “While they exist within a tradition of fragmentation which includes much Romantic poetry, and the works of Baudelaire, Rimbaud, and Nietzsche, among others, Artaud’s fragments are exceptional in their willed upheaval and contradiction of the language of poetry and the imagery of the self. Artaud’s letters to Rivière form a correspondence about communication whose axis is silence, erosion, and abandonment.”[7] Artaud’s fragments extend a tradition while propelling literature toward the productive energy of the void. In “The Nerve Scales,” an essay published in 1925, Artaud confesses: “I have often got myself into this impossible, absurd state, so as to try and create thought within me. There are a few of us in these times, who want to cut things down and so create areas for life within us, areas which did not exist and do not seem to belong in space.”[8] The power in these early poems can be found in the gaps between the fragments as much as within the fragments themselves. The surprise between the lines “I am not a grim reaper, whatever they may say” and “The moon, my betrothed, sits on my knee” demonstrates the richness of rubbing two ideas together.[9]

In Rivière’s estimation of what constitutes excellent poetry, he missed seeing Artaud’s particular fragmentation as a valid and valuable artistic expression. Debates about the limits of universal literary excellence continue today. For example, in an open letter from Apogee about blind submissions, the editors argue against the assumption that erasing an author’s name and bio note from a journal submission will somehow result in “fairness” because only the “best” writing will be selected. What happens instead, they reason, is that the blind selections show the editor’s particular worldview, aesthetic preferences, and sometimes, blindspots.[10] Artaud suggested that his writing, as a record of the mental suffering of a literary mind, was being wrongfully assessed with criteria that didn’t match his project. Artaud and Rivière's relationship is compelling because Rivière was willing to engage in a lively debate about aesthetics and to make public that exchange by publishing it in the Nouvelle Revue Française. These letters are part of what helped put Artaud on the literary map. André Breton read the letters and within the year Artaud had joined the Surrealists.[11]

1. In 1942, when Artaud was at the Ville-Evrard asylum during the war, the director of the Rodez institution recalls an impassioned plea from Robert Desnos to transfer Artaud from Ville-Evrard in order to keep him alive. The director, Ferdière, lists Jean Paulhan as one of Artaud's most loyal friends in this time of need.

10. “From the Editors: The Politics of ‘Blind Submissions’ Policies,” http://www.apogeejournal.org/2015/07/from-the-editors-the-politics-of-blind-submissions-policies/