Antonin Artaud moved to Paris in 1920 and boarded with Dr. Édouard Toulouse and his wife. They had been introduced by Artaud’s doctor in Switzerland in hopes that Artaud would be able to live close to Paris under the indirect supervision of a man with some medical expertise and an artistic inclination. Dr. Toulouse, who had also been born in Marseilles, was an ideal candidate for Artaud’s supervision. Toulouse’s 1896 book outlined a study of the connection between superior intelligence and nervous disorders, based on clinical observations of Émile Zola.[1] The critic Bernard Baillaud notes that “Toulouse’s work as a therapist crossed over easily into the literary and social domains. He saw himself as a novelist whose work was based on exact observations, and said that he had come to science through literary activity.”[2] By the time the twenty-four year old Artaud arrived on his doorstep, Dr. Toulouse had been directing the journal Demain for 8 years. The review was a mix of literature and advice on mental and physical hygiene. The think-pieces ranged from opinion about opium use to language use to social customs (referring to the Malagasy kiss as “breathing in the loved one’s soul passing out from the lips without touching him.”)[3] During his first years in Paris, Artaud helped with the journal in various ways, including editing and writing content. 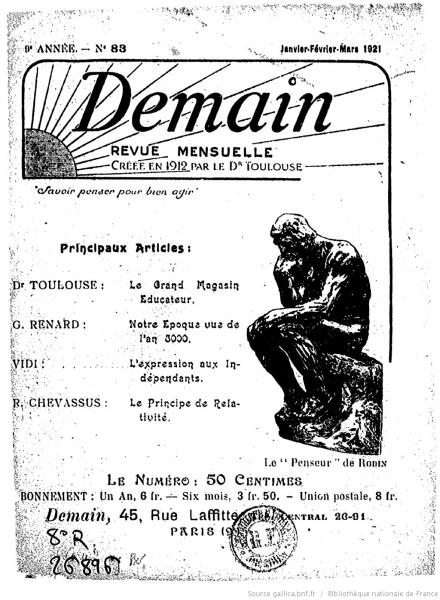 A handful of Artaud’s poems were published in Demain including “Night,” which appeared in the issue pictured above, in 1921. In this poem we glimpse a bit of the journal’s ethos, including the advice to approach reading and ideas slowly, a sentiment which Bernard Baillaud situates in opposition “to the rapid reading speed imposed on [the reader]. Far from representing a constraint or form of self-censorship tending to force a choice among the headlines, this method allowed for everything to be read.” Reader as flaneur as slow movement advocate. In “Night,” Artaud declares:

Poet, those things preying on your mind
Have nothing to do with the moon,
The rain is cool
the belly is good.

Deep down in the swollen sheets
Where the whole night breathes,
The poet feels his hair
Proliferate and grow.[4]

Here the poet relishes in the body and pleasure. The slow accretion of time becomes the subject of observation. Imagine how much you’d have to slow down your focus to feel your hair growing. For the review, this calculated pacing was a protection against “hasty and excessive information, from too much empty documentation, and from futility in all walks of life.”[5]

We can see a feisty spirit, too, in “Night,” which also corresponds with Demain’s approach:

The poets’ fiery aeropagitica
Gathers about the green carpet.
The void spins.
Life crosses the mind
Of the thick-haired poet.[6]

Here, Artaud’s intense focus builds toward a powerful, almost disequilibrating defense of expression. The journal is about social hygiene, which includes the arts but rejects “ornate work” for its own sake.[7] This review had a vigilant watch over the wrong turns in modern living, like in Toulouse’s article, “To Prepare for Tomorrow: The Department Store Educator,” where he concedes that department stores are a modern advancement in as much as they’re the product of democracy and offer to all “comfort and sufficient luxury,”[8] while lamenting that they present clichés of style—crappy furniture in the age of industrial reproduction. Artaud captures this spirit in his preface to Dr. Toulouse’s collected works, Au fil des préjugés: “There are distortions in thought, mental habits, in short, vices, which pollute men’s judgment almost at inception. We are born, we live and die in an environment of lies.”[9] This was the world Artaud first inhabited when he moved to Paris.