The release of his most recent book of poetry, Magnetic Equator (2019), prompts my return to the spoken word and sound poetries of Montreal-based novelist, poet, and performer Kaie Kellough. When given the chance, I’ve thought publicly about Kellough’s work in other forums: a mini review of his performances here and a conversation we had about sound, technology, and ancestry here. Having just recently heard Kellough’s voice fill the atrium of the Art Gallery of Ontario at the launch for his latest collection, I was delivered back to the flows of joy and curiosity that I find his poetry and performances well within me. 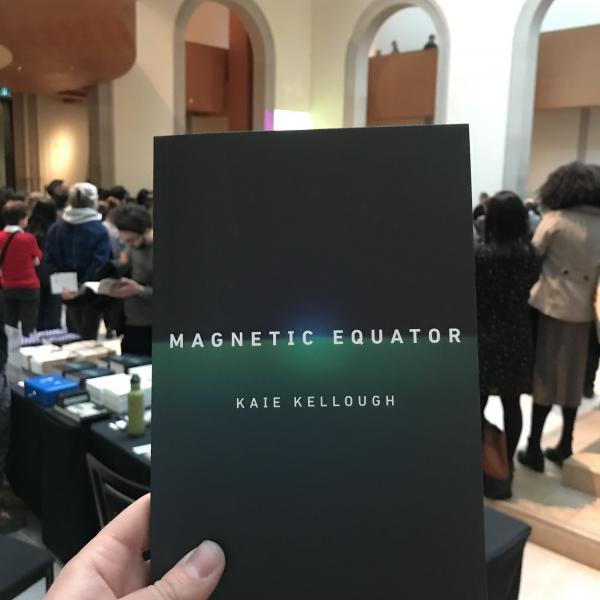 Kellough has a tendency to imagine the world as a conduit for vibratory pulses: “the rain forest is a mixing board with infinite inputs and outputs,” he writes in Magnetic Equator.[1] His poetry is often located on paper, but it is written for sounding. Kellough’s work is entangled within a complexity of machine, musicianship, world-making, and selfhood that searches for the outer limits of his craft. Every time I hear Kellough, I can sense the push and pull of his voice and body as he navigates his language, collaborators, and media. I sense that this is a space wherein Kellough feels very much at home, but it is in this space, too, that I hear restlessness, a search for something else on another plane.

Kellough’s earlier book Maple Leaf Rag (2010) is a book of poetry that actively searches for home and belonging along the plane of Canadian national identity. The book exists in a format similar in size to a songbook and, according to the cover, contains poems that are composed, not written. As such, Kellough draws our attention to his dual position as musician and poet. Shifting between poetic modes, including lyrical verse, prose poem, sound score, and more, Maple Leaf Rag revels in a sonic logic that draws from dub, hip hop, and jazz. The title nods to Scott Joplin’s 1899 ragtime composition of the same title. “i chose maple leaf rag as my book’s title,” writes Kellough, “because it fuses jazz music with our national symbology. while the title celebrates the unity of black culture and Canadian culture, it also suggests a malaise, a critique.”[2] 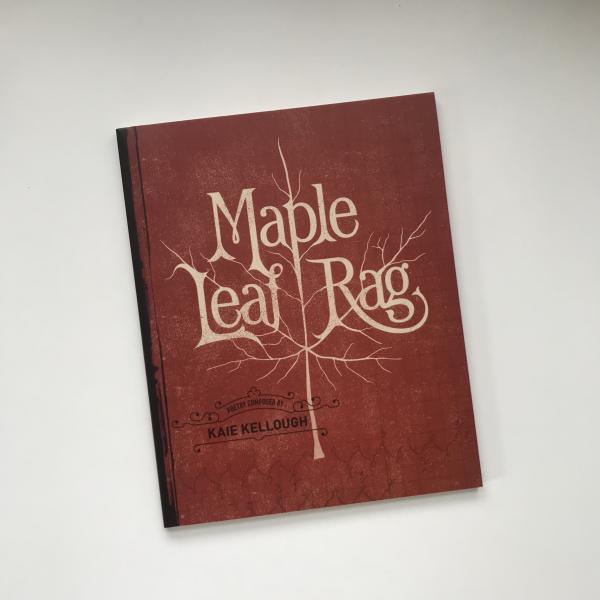 The critique Kellough advances in Maple Leaf Rag draws attention to moments of anti-black racism and racial bias in Canada. These are problems of finding a sense of belonging within a space that is hostile to persons perceived as other. As Kellough explained it to me in 2016, “Being othered means that I am suddenly not the complete individual I thought I was, but am instead somehow diminished and outside — even outside of myself.”[3]

His poem “jelly roll in canaan land,” for example, extrapolates from a brief mention of a planned Canadian tour for legendary ragtime and jazz musician Jelly Roll Morton, which Kellough found in Mister Jelly Roll: The Fortunes of Jelly Roll Morton, New Orleans Creole and “Inventor of Jazz” (2001). The tour was scheduled to take Morton through British Columbia, but Kellough speculates that these shows were likely “poorly received.”[4] In a direct address to Morton, Kellough muses, “maybe this frozen northern rock was not ready for your sophisticated creole rollick, was not round at hip enough, brown enough, down on the rock enough, rough and real enough to be jellied by your roll, to reel to your wreck, your restless soil, your spook soul.”[5] Kellough’s explanation for Morton’s poor reception is grounded in racial discrimination. For audiences in BC in the 1940s, Morton’s music was outside of what BC residents identified as part of their cultural locus, their identity.

i remember the school soccer field

...
shrieking after the black

The poem continues on to describe the violence of the fight that ensues after the racial slur: the traces of violence that remain on the surface of Kellough’s body, within his nervous system, and in his memory. These are experiences and encounters that compose Canadian identity.

Both poems correspond to problems of reading — more specifically, the problematic reading of one body as other and outsider. And while both poems are steeped in the vibrant sounds of Kellough’s hard-edged lexicon of aural elations, the end of the book shifts more explicitly to audition and voice. Kellough offers a two-part score entitled “Word Sound System 1.” The handwritten piece is comprised of the repeated phrase “do you read me” and a set of instructions guides the reader through a rhythmic pattern for reading aloud.[7] That question, “do you read me,” attends to the problems of reading persons as other, of diminishing and disrupting a person’s sense of self. How do you read me? Kellough asks the reader once they have travelled through poems that capture experiences too often denied as part of Canadian history. In its pivot toward vocalization and performance, Maple Leaf Rag’s “Word Sound System 1” then also asks, how do we give voice to each other?