It’s October 24, 1981. You’re on route to Studio Gallery Nine, located beneath Toronto’s Don Valley Parkway, just north of Queen Street East at 9 Davies Avenue. You’re travelling this route to attend an event hosted by the Kontakte Writers In Performance series. Japanese Canadian poet and cultural critic, Gerry Shikatani, is on the bill. Since 1973 he has been known for using silence in his performances, a methodhe will tonight extend to his practice ofconceptual artmaking and installation. You approach 9 Davies Avenue, and unknowingly you are about to enter one of Shikatani’s first ventures that considers the poetic event as installation, structure, process, and point of contact. You enter the building.

The performance space is located on an upper floor of the lowrise building. To arrive at the reading — that is, to arrive at the point of poetic contact — you must board an unremarkable elevator and travel to the gallery floor. You press the elevator call button and wait […] You hear a whirr and then a ding. The elevator opens. Your eyes drift from the floor indicator above toward a large visual text installed inside the elevator. What is the visual text? You have no idea. You see, as Shikatani would explain, what is most significant here is the act of putting a visual text in the elevator, not the text itself. It is intended to nuance the arrival of the public and to initiate the idea of writing as a process that often begins before the event of attending and listening to a reading.

As your eyes travel around the elevator you notice a desk — not a large desk and certainly not an office desk. Upon this desk is Shikatani’s Olympia manual portable typewriter, the typewriter he uses at home. You board the elevator, maybe smiling at the surprise of your companion; maybe you press a typewriter key, but that’s not required of you. There are no instructions. The typewriter is what Shikatani describes as a “prop of silence, of potential.” You and the typewriter stand together, silently. The elevator travels to the gallery’s floor, the doors open, you step outside of it and, in doing so, you’ve stepped out of Shikatani’s elevator art installation “Sans Titre.”[1]

As poetry’s cruelest month came to a close in 2019, over one hundred and fifty poets and scholars gathered for the “Text/Sound/Performance” conference at University College Dublin in Ireland. I had the opportunity to share my thoughts on Shikatani’s scantly documented performances and installations from the 1980s. As early as 1973, Shikatani incorporated silence as a gesture into his performance work that distinguished his stage presence from that of his peers like the vaudevillian sound poetry ensembles Four Horsemen and Owen Sound. Like the performance I have reconstructed as a narrative above, much of Shikatani’s performance and installation work is grounded in process, voice, silence, and absence. 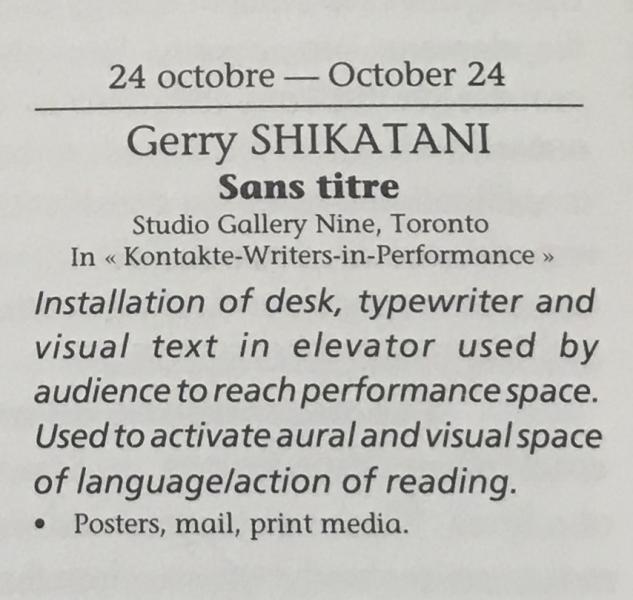 Alain-Martin Richard and Clive Robertson offer a few valuable, but truncated notes (see image above) on Shikatani’s performances in their chronology in Performance au/in Canada, 1970–1990 (1991) that locate this strain of his practice as early as 1973. I come to these performances and installations with a particular sense of Shikatani’s relationship to the English language and Canada’s ongoing legacy of racism, othering, and oppression. Poet Rachel Zolf describes Shikatani as a “Japanese Canadian man working primarily in English but with an oral/aural knowledge of Japanese from his childhood.” She explains that “Shikatani’s knowledge base includes the silencing of his Japanese language and identity that the imperialism of the English Language and its inherent racism enacts.”[2] Shikatani’s pursuit of silence in performance and installation, then, could be said to be strongly connected to his sense of Japanese Canadian identity and, by extension how that identity is interpolated within Canada. As Zolf notes, and is further evidenced by Shikatani’s introduction to the Japanese Canadian poetry anthology Paper Doors (1981), he is deeply aware of the social, political, and cultural repercussions of Canada’s egregious decision to displace and intern Japanese Canadians living in Western Canada following Japan’s declaration of war in 1941.

With this in mind, I cannot help but connect an installation like “Sans Titre,” with its marked absence of poetic voice in the context of the reading event, to related notions of displacement. “Sans Titre” strikes me as a work that points to the conditions of the displacement and silencing of Japanese Canadian persons at the hands of the Canadian government. As such, I understand the piece as a lament. The title “Sans Titre” (French for “untitled,” of course) gestures toward a sense of the incomplete. The unused typewriter is confined to the liminality of the elevator, a holding space that is always between points of origin and arrival. It is not there for utilitarian purposes, but rather it is a prop of silence. Without a designated poet at its keys, it gestures toward the poet and person who is absent.

After the conference, my friend, the poet Stephen Cain, asked me if I thought these performances should be recovered and interpreted at all. Considering Shikatani’s inclination toward the dematerialization of the art object and that pieces like “Sans Titre” actively foreground the absence of the poet, what are the ethics of recovering what is intentionally temporary and made absent? While sound and performance are always to some extent temporary, and silence in the poetic context is an even more poignant kind of absence, Shikatani withdraws his voice and his body from the poetic event intentionally. On the one hand, such decisions enact a psychic labor and encourages the audience to negotiate with what is missing. Such conditions are suiting since they, too, call forth Shikatani’s strategic displacement of vocalization from the context of poetry itself. These displacements invite the audience to imagine what is missing, what could be said, and to negotiate the conditions of absence. On the other hand, Shikatani’s performances made palpable the conditions of silence and absence of a specific group in Canada for an audience in a different time and place. Shikatani made a conscious decision to intentionally unsettle the audience’s expectations and criticisms of recovery might risk the depreciation of such affects and the radical potential of that work. Such a conundrum is surely polarizing, but Shikatani’s work leads toward another significant line of inquiry: What do we do with art and poetry that has been intentionally disappeared?[3]

1. My deep gratitude to Gerry Shikatani for taking the time to correspond with me and share his memories of select performances from the 1980s.

3. Portions of this commentary were recently presented at the “Text/Sound/Performance” conference at University College Dublin, 25–27 April 2019.