“Notation is a set

In the mid-1980s, Open Letter — Canada’s defunct and dearly missed journal of theory and poetics — dedicated five issues of the journal to notation for poetry and language. Each installment of this series contains a range of texts that intersect with the idea of notation to explore topics including reading, rhythm, composition, documentation, and performance.

In the Spring 1984 issue of this series, for example, British poet and artist Paula Claire explains some core elements of her sound poetry practice which includes improvising sounds from natural objects. “At the eighth International Sound Poetry Festival at the Poetry Society, 1975,” she explains, “I took my notation from actual variegated leaves: I handed a dozen leaves round to all present and people responded simultaneously to the patterns.”[1] Claire’s practice engages a wide range of objects, using the marks she finds in them as a score for vocalization. She uses a diverse array of materials including microscopic images of vegetable and animal matter, amino acids, and even a virus. In the Spring 1985 issue, Steve McCaffery considers writing and the unconscious of the page: “IF THE PAGE HAD AN UNCONSCIOUS IT WOULD FIND WRITING UNBEARABLE AND WOULD FEEL ITSELF TO BE A BODY COVERED IN BLACK LARVAE.”[2] These two texts, like all the pieces in these related issues of Open Letter, are concerned with the mark as the basis for creative, risk-taking expression. 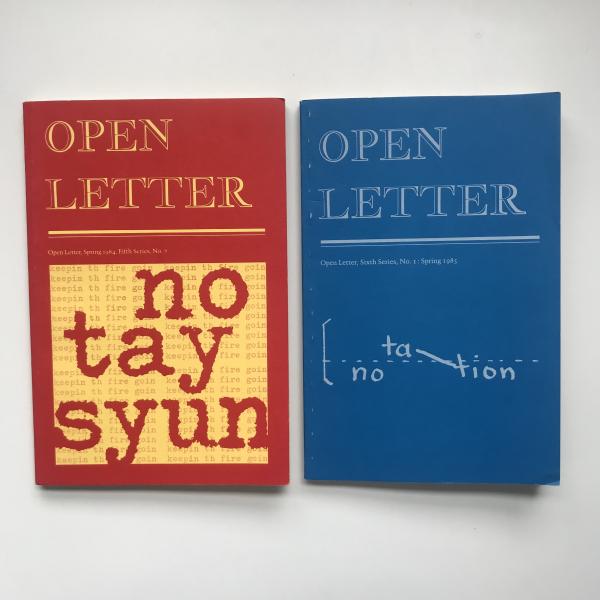 The Open Letter series reminds me of a key issue for Canadian sound poets: the record of the sound poetry score for performance and documentation. Canadian sound poets have adopted an array of tactics for transcribing and scoring their sound poetries. If given the opportunity for longer form exploration, I could document the very wide variety of sound-text scores, but for now I’ll look toward two exemplary methods: those of Toronto-based Four Horsemen (bpNichol, Rafael Barreto-Rivera, Paul Dutton, and Steve McCaffery) and Ottawa-based First Draft (core members include Susan McMaster, Andrew McClure, Colin Morton, and Claude Dupuis). While both were concurrently active as sound poetry and performance ensembles, they strike me as groups that represent somewhat divergent approaches to the process of notating the poem for performance.

In The Prose Tattoo (1983), Nichol explains how the Four Horsemen arrived at their unique form of transcription. He writes: “One of the first problems confronting the group when we formed, after having gone thru the orgiastic preliminaries of screaming our guts out in free-form improvisation, was an issue of notation (& hence structure). We wanted to find a way to write down certain more complex pieces we had ideas for where, tho elements are improvised, other elements were fixed.” Thus “a combination of optophonetic or grid notation systems, old fashioned memory work, & extensive improvisation (in terms of both abstract sound & dialogue) have been the basic elements in all our performances.”[3] Such a combination has resulted in sound poetry scores that look like “East Wind” from The Prose Tattoo: 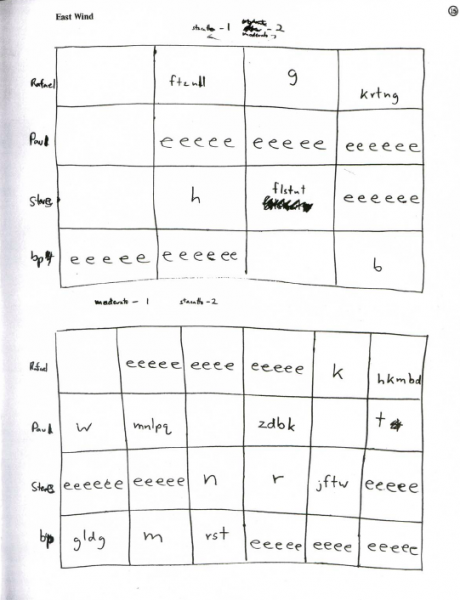 For sound poets like the members of the Four Horsemen, however, the idea of transcribing the sound poem is counter-intuitive to the art of sound poetry itself. Nichol writes, “print is an inadequate medium for our ultimate goal” and continues to state that, “The individual group members are what bring the pieces alive.”[4] For Nichol, speaking on behalf of himself and his collaborators, the sound poem performed from the body is the ideal form of the poem. The sound poem is an invention of the moment, of particular bodies enmeshed with one another in a particular space and time. The sound poem it seems, based on Nichol’s comments, is solely animated by the Four Horsemen in performance.

In distinction, First Draft designed a meticulous notation system for their sound and performance poetry that would ideally enable any person to perform their compositions. To do so, they drew from composition methods for music. They released two books of their performance scores: Pass This Way Again (1983) and North South: Performance Scores for One to Seven Speakers (1987), both were published by Underwhich (one of Nichol’s ventures with other members of the Four Horsemen). In their essay “The Spoken Voice as Musical Instrument: Performance Poetry Notation” in Open Letter, Susan McMaster and Andrew McClure describe the various components of their notational process. “Ideally, a notation system,” they explain, “should be clear to read and simple to understand; fully descriptive musically, as conventional as possible, for the sake of the performer and conductor; and with symbols that can be easily formed, for the sake of the composer and copyist.”[5] With attention to the core aspects of vocalization, they delineate primary areas of pitch and time in their scores with additional notes on dynamics, articulation, phrasing, and timbre. Each of these elements are essential to the processes of meaning-making for First Draft, thus their notations ensure that these elements are as precisely represented as possible. For example, for pitch, they establish a single horizon line on the page to represent the “natural pitch of the speaker’s voice” and “Vertical placement of words indicates higher or lower pitch”[6]:

Similarly, for time, First Draft divides the staff into “regular units of time, about three seconds each, represented by small marks running across the horizontal.”[7] Such spatial notation is not precise, but is intended to capture the overall tempo of the piece. Additional symbols are used when coordinating multiple voices as part of the same performance piece:

This rigorous approach to notating the poetry performance suggests they intend to provide scores that are detailed and descriptive enough to be used by other performers.

While both approaches to scoring the poem are equally striking with their own degrees of visual complexity, they are attuned to privilege different aspects of poetry and performance. The Four Horsemen, on the one hand, score their sound poems with the intent of preserving the improvisational quality of their work. Their scores are records, but they do not supplant the performance of the poem itself. Further, the success of their poem seems entirely reliant on the qualities of the Four Horsemen together in a specific moment and time. Authorial presence and the interpersonal experience of the sound poem are essential. First Draft, on the other hand, approaches notation with the intent of preserving the potential of their poem to be activated by other persons and practitioners. They provide enough detail in the score itself so that other persons can activate the poem in performance and let the poem live on beyond their bodies, time, and space.