“The point was to develop an art as poetically unpredictable as a dream, and then hurl it like a football into an unbelievable reality.” (Brian Holmes on Etcétera, later to transpose into the Errorist International)

The world as it is: utterly impossible. My trouble—shared by many who read these pages, I know—is navigating a space where writing and art practice dovetail with activist and resistance practice in ways that will create meaningful change both inside and outside the contexts where those practices tend organically to find a home. I’m tired of saying this; I’m tired of existing in the-world-as-it-is. I think of art-making as instigating change on a molecular level: our eyes and perspectives shift; the air we move through moves differently; we might be other than ourselves. Nomad thought: shifts in perspective and mobility make shifts in experience and relation possible. Along the way, we falter. That faltering is our art. ¡Viva el error!

Errorism: Key Points (not my translation; couldn’t for the life of me figure out whose it is)

1. We are all Errorists.
2. The basis of Errorist action is Error.
3. Errorism is a mistaken philosophical position. Ritual of negation. Disorganized organization.
4. Errorism’s field of action includes all practices tending toward the LIBERATION of human beings and of language.
5. Failure as perfection, error as bull’s eye.6. Errorism: It Isn’t, and it Is. It gets nearer, it slips away. Self-creates and self-destroys. Lives up to its old and new forms. (sometimes without explanations, and who knows, maybe it’s totally banal).

I want to write a series of temporary manifestos or trans      positions. In Spanish the word “temporal” means both temporary and temporal, related to time, in time. This one will last as long as you’re reading this page—if that long. A constellation of transitory manifestos. Words are ephemeral or they are ephemera. They disappear, gauzy and forgetful, or they are retained, brittle mementos on display, warped cardboard boxes labeled “memories” in a pitched attic crawl space. 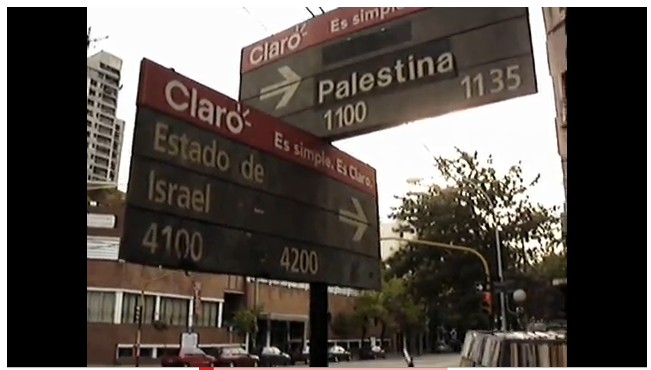 Art-making and political action ricochet off one another. The intersections of poetic consciousness, artistic adventure, outrage at the brutalities that result from overzealous militarization combined with institutionalized oppression combined with enforced scarcity, and a willingness to fail—and to do so sometimes dazzlingly—can be located or inhabited anywhere. Opportunity lurks on every street corner. (It seems apt to be reminded of this work just now, when the Goldstone Report, on the targeting of civilians and other war crimes during the war between Israel and Hamas in Gaza, is being called into question, while Gaza remains a war zone.)

Here’s what the Errorists had to say about this video at the time of its making:

Since its founding in 2005, The Errorist International has performed actions and awareness-raising maneuvers in relation to the global logic of terror/error, as a response to particular types of situations, such as the attacks, invasion and occupation currently underway in Gaza, in the Palestinian Territory. The conflict has been going on for nearly three weeks and to date has resulted in more than 900 deaths and more than 3000 people wounded, according to official data. 1/3 of the dead and wounded are Palestinian children, women and men from the civilian population, and inhabitants of the Gaza Strip.

As with every action of the Errorist International, the functionality of the image-action relies on a play of various meanings and multiple possibilities for errors of interpretation. And the possibility that even the enactment of the very idea itself might be an error! (my translation)

Theater of the absurd, theater of the real. I'll state the obvious, which seems necessary to restate. It is not possible to remain silent. But how to speak in the presence of the unspeakable? The errors of attempt, of articulation, of clamoring refusal to bow down in the presence of atrocity are necessary, if our alternative is the error of failing to respond at all.

Escrache against Luciano Benjamín Menéndez,
responsible for the kidnapping, torture and death of dozens of people
accused of being leftist guerrillas during Argentina's Dirty War.

Etcétera, the collective that sowed the seeds and weeds of the error-actions of the Errorist International, worked with HIJOS (Hijos por la identidad y la justicia contra el olvido y el silencio) and with Colectivo Situaciones to create responses to the violent failures of repressive systems of government. Together with other activists in the long-term aftermath of military dictatorship, they enact escraches, through which participants in the dictatorship’s brutalizing of freethinkers and autonomous civilians are boisterously “outed” and encouraged to go public with the history and reverberations of their actions. (Genocide in the Neighborhood is a fantastic book on the subject, published by Chain Links and edited/translated by Brian Whitener.)

Escrache... what would we call that in English? And what would such an event look like in Los Angeles or Philadelphia? In Ciudad Juárez? In Sana’a?

Etcetera...
Doesn’t need to be defined...
Use your imagination: what comes next...
Etcetera... is the word that shatters the linguistic system
Etcetera... closes and opens discourse
Etcetera... «is» in all languages
It is thus an ally everywhere in the world
Its members can’t be counted
Etcetera… is singular and plural, feminine and masculine
Etcetera… adds subtracts divides and multiplies

From the Relative Truth to the Absolute Error!
There’s a fairly substantive English-language description of the Errorist International on the Smart Project Space website, along with an exhibition view with a gallery of errorist projects in the footer. And here is a more recent errorist interview.

More information on Argentina's Dirty War can be found online at Proyecto Desaparecidos, the HIJOS website, and at the Association of the Madres de la Plaza de Mayo.

On the topic of Latin American art-making (and noise-making) against forgetting, Subverso, Detroit-born Chilean activist rapper, wrote this dynamite song, "San Bernales," about the whitewashing of history after the death of General José Alejandro Bernales, posthumously named "general del pueblo" ("the people's general") despite his use of terrorist tactics against Mapuche activists and others working for social justice and human rights for all people in Chile.

More Subverso videos and other information at the Sala de Noticias Anarcopunk.