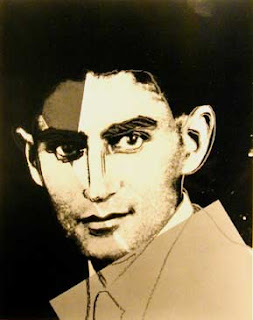 Kafka's friend, the brilliant editor/critic Max Brod, saved his strange pal's papers despite his pleas that they be destroyed. Brod's lover-secretary got them after his death and now her daughter has them somewhere in or near Tel Aviv. Finally, because the daughter needs some cash, it seems that these papers will be made available, once some archive buys them (for many millions). This is all a big deal, although the Times, in covering the story this morning, hasn't much to go on: their writer in Tel Aviv quotes various Kafka scholars relevantly and irrelevantly. Is the question of Kafka's possible interest in the Hebrew language, in his Jewish identity, in Zionism, relevant to the news of the extant papers? Not necessarily. And via the headline we learn that the pressure of the daughter of the former lover-secretary to release the papers is "Kafkaesque." It doesn't seem Kafkaesque to me at all - in fact, the opposite. The motive (originating in her, not put on her) is purely to turn the writer's extraodinarily uncommercial writing into lots of cash. Such straightforward normative valuation seems unlike anything I've ever read in Kafka. Here is your link the Times article.