One evening with Jules and our daughter, Jessi, I wandered a warehouse of open studios near the Willamette River in northeast Portland. We came upon organic chemist David Cordes painting a narrative of organic chemistry and nationalism; a couple operating as florists who sold nothing and displayed no floral arrangements, but urged people to try their homemade sweetbread; and a woman who urged visitors to arrange glass designs from bowls of crushed glass, which she offered to fire in the kiln, with no mention of charge. A startling-lack-of-explicit commerce continued from studio space to studio space. Our last stop of the evening was a space where a tightrope was bolted a foot off the floor.

A woman explained that at first she wanted to practice walking the tightrope to “achieve some balance,” but, over time, she became more interested in watching other people attempt that walk. Needless to say, we obliged, all determined to cross the cord. No matter how many times we attempted, we couldn’t seem to do it alone. Jessi crossed if one of us was lightly touching her hand. I crossed when that woman stood at the other end, beaming, and told me she was convinced I would cross. Indeed, I walked right to her. 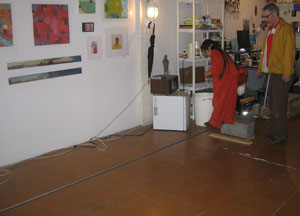 Jessi attempts the tightrope with Jules as support

I can imagine that standing among throngs of people viewing a woman stride the tightrope would be its own spectacular experience. I also know that our particular experience of the tightrope–intimate, whimsical, participatory, relational–could not be experienced en masse.

I recall this experience as I think about what accessibility can mean for poets working with experimental forms. “While I’m not writing in a mainstream vein,” wrote Dodie Bellamy in a poetics statement for the Positions Colloquium, “I’d like to keep the pleasures of my writing available to those uneducated in the whys and how-tos of experimental/disjunctive literary techniques.” The term accessibility is laden with assumptions about which conventions are familiar to the most people. But should accessibility be hamstrung by the conventional to the exclusion of the marvelous, the surprising, the playful? To the exclusion of what one doesn’t yet understand?

I'd like to make strange the idea of accessibility, brush off its rust, oil the springs, see what else it can mean.

To be accessible is to afford entrance, to make something “capable of being entered or reached; easy of access; such as one can go to, come into the presence of, reach, or lay hold of” (‘Accessibility’ 2009). This description is spatial, as if one is coming upon shelter. How might one create entrance points for a poem so that it might be inhabited in various ways, a small society among the poetic act?

In his introduction to the Big Bridge Issue of Slow Poetry, Dale Smith (whom Jules interviewed in an earlier commentary) writes

…many Slow Poets may go unrecognized by global communities, but as the local takes on greater importance in our lives we will be gratified by the labor given for the sake of local needs and concerns. Meaning is productive. Our engagement with daily life produces valuable knowledge through experiences that can benefit the poet and the local community, and occasionally, this can move beyond.

Poetry with local significance can afford entrance to a community that shares in its significance. Such projects might be participatory. Local significance, participation … these are ways of affording entrance. And some poetry might be recast for local significance. Accessibility need not mean that poetry blankets many, many people, like leaflets dropped from above. Perhaps the access is through relationships, necessarily, like crossing a tightrope only with the support of a friend.

Public space poetry that reaches an inadvertant audience also affords entrance, sometimes combatively, tying the word 'access' back to its early use as 'attack, fit.'

What else? Shared topics. Susan M. Schultz affords entrance to readers who share her interest in dementia and memory, and these readers then grapple with her experimental form of reversing the chronology, blogstyle, of her accounts of her mother's dementia. (Here's a discussion of that book, Dementia Blog, on PoemTalk).

What else? What are other ways to locate a side door, find a few steps just sturdy enough to climb into the poem, figure out new ways of affording entrance? 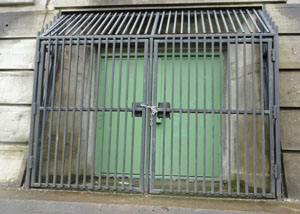