A preface from the publisher

Happily, we inaugurate Jacket2. For all the complexity of the work in poetry and poetics you’ll read on these screens, what we’re doing here is I think explained rather simply. We want to preserve what John Tranter has done with Jacket in its first forty issues, and to a significant extent — although in a somewhat new mode and a somewhat different context — continue and extend it. The new mode? A site pushing technically past what’s been called 2.0, with all the vaunted interoperabilities: collaborative editing and rostering of new articles; a rotation of three-months-each guest commentators, able themselves to post contemporaneous responses to various poetics scenes they “cover”; a means of laying out features that enables readers to see at once all diverse elements of materials and responses to a single poet or topic as gathered by a guest editor; an image gallery for uncluttered viewing of many images associated with an article or feature; podcast series (such as PoemTalk and Into the Field) both streamable right on the page and downloadable for free; video players both inline and linked; a Reissues department for making otherwise inaccessible archival material available in full digital facsimile; advanced searching through both new Jacket2 pieces and every single article, review, and announcement ever published in old Jacket; and seamless server-side linked cross-relations between critical responses written for J2 about readings and recordings on one hand and, on the other, all the digital audio (and video) stored in the vast archive known as PennSound. Even as we just get started, dig around and you’ll find a great deal here — and tons of potential. 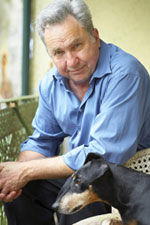 Tranter’s Jacket was famously — and monumentally — a 1.0 project. From the beginning (1997), John did all the HTML markup himself. Those of us who published in Jacket know of John’s (and later Pam Brown’s) attentive, perspicacious editing. Those of us who have looked under the hood of this particular car driving fast down the Internet-sped poetics highway have seen the intricate, tangled but perfectly hand-wired cables. A labor of love all those years and perhaps too, in its way, as a whole, a work of art. Some people we admire (Loss Pequeño Glazer, Brian Kim Stefans among them) have argued that the programming code is part of the aesthetic — that, in short, coding is itself beautiful.1  Having worked with the thousands of pages John created, we’ve come — humbly, from our special vantage — to agree. So perhaps the best thing we will have done is what John Tranter asked us to do in our first conversations about preserving old Jacket here: we’ve moved every single Jacket page to our server and we retain them almost exactly as they are, adding only a link to Jacket2 at the top and a search engine that will pick up both the old work and the new. (At right: John Tranter.)

So here in Jacket2 you’ll still find Rachel Blau DuPlessis on Barbara Guest, Michael Basinski on the Jargon archive, Kristin Prevallet on Spicer’s Creeley, Terrence Diggory on Williams’s wheelbarrow gone global, Wystan Curnow’s sense of modern colors, Rod Mengham’s take on new Polish poetry, James Sherry on The Grand Piano project, Marjorie Perloff on normalizing John Ashbery, Ken Bolton on Eileen Myles’s travel writing, etc. It’s all there — all here rather — and in addition, there will be something new to read at J2 every day. We promise that if you look here daily you’ll find something you haven’t seen before. (Well, we might slow down during the Northern Hemisphere summers, but we’ll see about that.) John Tranter had already pushed the concept of the online “issue” to the point of breaking. Issue 40 is the equivalent of 1,200 printed pages. So our move to an issueless ongoing magazine hardly represents an acceleration of Jacket. But, we hope, readers will see that the extent of the lively multilateral collaboration we intend among our editors, guest commentators, special feature editors, and reviewers finds its apt formal expression in the 24/7 mode in which we’ve chosen to publish.

Above I claimed for J2, with respect to J1, a “new mode” (and then I described it), but I also used the phrase “new context.” The potential real advantages to be derived from such a particular editorial, archival, and institutional context was I think what attracted John Tranter to us in the first place. He hoped — and we fully intend — to put the critical and poetic work of Jacket in close relation to PennSound, the Kelly Writers House, and the activities enabled by the teaching and other resources at Penn’s Center for Programs in Contemporary Writing (CPCW). The Kelly Writers House is now J2’s home base. The connection to PennSound’s archive is, as I’ve already noted, both technical/digital and critical/theoretical. There will be moments when our readers will experience the writing published in J2 as a critical, audiographical, and historical response to recordings just then newly available in PennSound; and that would be the case because the two efforts were coordinated and simultaneous. Charles Bernstein, my cofounder and codirector at PennSound and a J2 commentator, conceives of PennSound as a site where poetry archivally “actually happens,” where it can be experienced and “‘learned’ (not ‘taught’).”2  And as director of CPCW and Jacket2’s publisher, I hope in the coming months and years to find a few really inventive ways to bring the heterodox, dispersed community of poets, critics, literary-political people and other artists published here in connection with the activities and projects of students, teachers, and emergent writers whose access has mostly been tentative, fleeting, and based on the luck of same-time/same-place convergence. Providing continuity for one of the first online magazines not just in poetry but of any sort, Jacket2 is surely an apt site for further explorations in intentional convergences of the dislocated community — a folksonomy that informs, updates, augments, invites learning, and sometimes surprises.

2. I am not quoting Bernstein here but a 1975 dialogue on oral poetry that is crucial to both of us as creators of PennSound, an interview with Jerome Rothenberg conducted by William Spanos originally published in Boundary 2 3, no. 3 (Spring 1975). The phrase is quoted from the piece as it was reprinted in Rothenberg, Pre-Faces and Other Writings (New York: New Directions, 1981), 36.