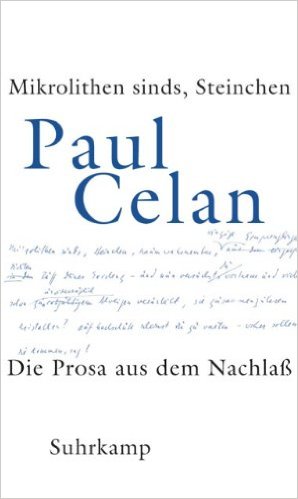 Over the last two year it has been a great pleasure to work on & off at translating Paul Celan's unpublished miscellaneous prose works that were gathered some years ago by Barbara Wiedemann and Bertrand Badiou in the volume Mikrolithen sinds, Steinchen (Microliths these are, little Stones [Pebbles]). Having put the work on the proverbial backburner for some six months, I am now in the process of pulling it out again & going over the texts to shape a final ms. to be published toward the end of the year by modem-verlag. Except for two essays and one prose piece (Conversation in the Mountain), Celan did not publish anything beyond his poems and translations. But he did leave a rich trove of aphorisms, paradoxes, sketches, and short narrative & topical fragments (often returning, sometimes openly, sometimes in more veiled terms, to questions of Jewishness, of politics, of the mistreatment that befell him via the Goll affair). All these are fascinating as they are not only a pleasure to read qua writing, but also because they help throw light on a complex, profoundly private & and often secretive man. Be that as it may, for me maybe the most useful of this work is a range of reflections, just as short & pithy, on poetry & poetics.

The brevity, terseness and condensed power of these sayings/writings, combined with their often playful punning language, and their difficult to assess status (are they finished, abandoned? Which version of those for which we have 3 or 4 tries, should one use? Would Celan have thrown them out? Or completed some of those that are obviously open-ended?) make for marked difficulties in translation. I am thinking right now that it may be most helpful (should a translation be "helpful"? And if so for whom?) to leave as much of the meta-translation aspect (notes, multiple word choices, etc.) in as needed.  Here are just a few from the early aphoristic gathering which he usually referred to as (or under the title of) Gegenlichter / Counterlights:

Certain “citizens” and the poem: They buy the surprise bag; one knows vaguely what’s in it, it won’t be much, but then it doesn’t cost much either, and if one already visits the fair and has enjoyed the lady without lower- but with upper- body, one’s amusement also demands that. And when what’s in it turns out — but here too the buyer’s superior humor can prove itself — to be even cheaper than cheap, there still remains the fun that all of that was “too” /[“zu” "closed"]

35.2 There is (in small and smallest coinage) a koine of the lyric; and then there is the one singular language of poetry.

36 Comfortably at home in stylistically correct smart aleck’ry, one will write obituaries for the great deceased and, while in selected company availing oneself of the memorial sites, one will not forget to take an elegant sideswipe at one’s young neighbor on the occasion of the wreath laying; evenings one will pray briefly but substantially to the God one came to via several (up-to-date and high-profile) conversions,  and the next morning one will, while commenting the latest news with Bible-, Goethe- and self-citations, drink one’s black coffee, with a mouthful of toast and commiseration.

46.2 The poem, where it truly carries over (and in no way transposes): not metaphor, but metabasis — εἰς ἄλλο γένος into the Other… as into the Same.

46.3 To him who yells at “words,” language will refuse itself. He who yields to language, him… words will find.

46.5 Counterlights—: To counter the lice.

46.10 The human chance today: Return to the Future!

46.26 God needs the heretics…for this he punishes them.

NOMADICS: Meanderings & mawqifs of poetry, poetics, translation, y mas. In, on, and about the premises, i.e. where(ever) we are. Travelogue too.

Meditations on the Stations of Mansur al-Hallaj. (Poems) Chax Press.

Pierre Joris: Cartographies of the In-Between edited by Peter Cockelbergh.

Thoughts on Osip Mandelstam's birthday
Celan the Aphorist
From Dada to Daesh: One hundred years ago today in...
Introduction to « ANTHOLOGIE POÉSIE INTERNATIONALE »
Adonis in Osnabruck
Michel Deguy: A feast at Eco's
Handke's landing approaches
Author as ambassador?
On Mahmoud Darwish’s birthday, a new translation of 'Dying for Free'
The Murder of Syrian Poet Mohammad Bashir al-Aani
On the anniversary of Goethe's death on this day in 1832
On Paul Verlaine's 172nd birthday...
'A Sulfur Anthology': Clayton Eshleman, ed.
Novelistic sloppiness
Jonathan Dee's Introduction to Frisch's 'Montauk'
Poem by Abu Sakhr as transmitted by al-Sukkari & translated by David Larsen
Just out: Ashraf Fayadh’s ‘Instructions Within’
Just Out: 'The Blood of the Stone' by Marcela Delpastre
Translated from the Occitan by Nicole Peyrafitte & Pierre Joris
'Reading List' 2016
'To Think with Derrida Wherever He Is'
Collège International de Philosophie issue on Jacques Derrida
Abdellatif Laâbi's 'In Praise of Defeat'
Just Out: 'Canto Diurno'
Selected poems in French
Reading the NYTBR on Bishop and Lowell
Régis Debray 'Chez Lui'
On the role of the public intellectual & journalism