Artist's Book: Conceptual, shown above, is literally printed on demand—by hand. The first copies were sold in person at the New York Art Book Fair, and it is now for sale through the artist's website. Despite being a conceptual or heady project, it is also highly personal, since every page bears a trace of the author's body and presence. As if to emphasize the personal nature of this seemingly impersonal work, when I ordered my copy this summer, I received a reply from the artist revealing just how non-automated the POD process can be:

Thanks for your purchase of AB:C.

I will get it "printed" and sent out as soon as possible. Please pardon me that it may be 3-4 days until I am able to get the shipment out. My wife and I had our first child 5 days ago so. Pardon the slight delay. 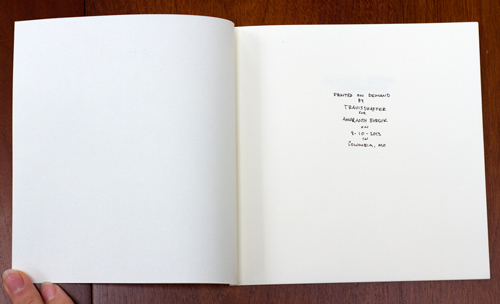 Shaffer's book is a lovely object. Hand-lettered on Rives Lightweight paper, which has a luxurious softness, its 20 pages are perfect-bound in a pleasing 6" square format that even includes a hand-inscribed spine, mimicking the conventions of a trade paperback. The abbreviated title, AB:C, suggests the project's simplicity. Like a child's primer, each page contains a single word. Progressing through the book, we learn about its activating concept:

Shaffer plays with the time of the book: the time of creation, of reception, and of the turn between pages that lets language unfold. The book is a performance. 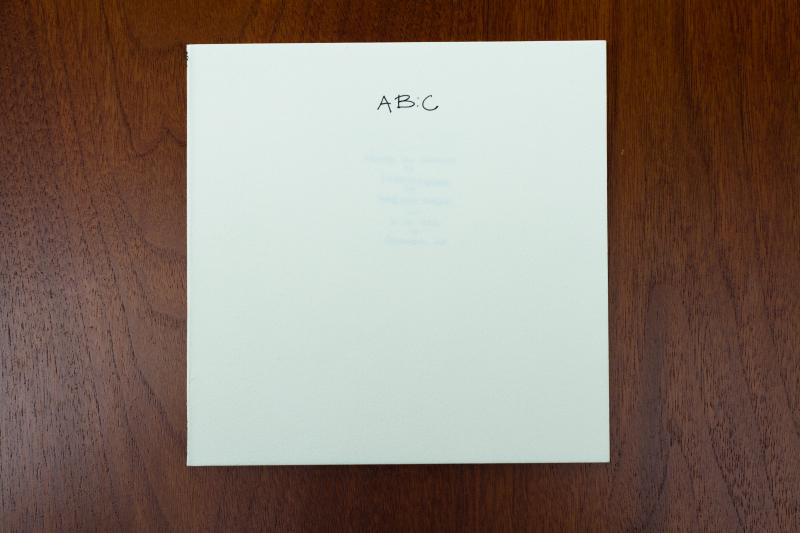 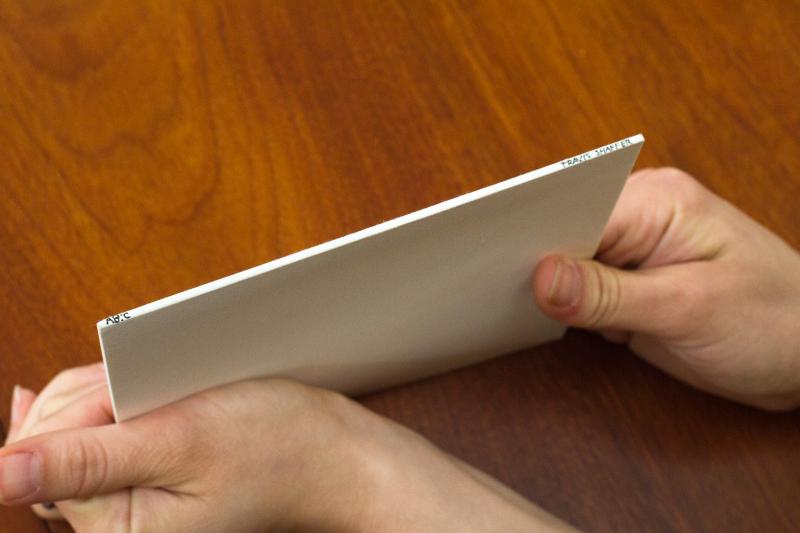 Shaffer works extensively in print-on-demand form, but his other books hew more closely to our general understanding of the term. A member of ABC [Artists' Books Collaborative], an international collective of book artists working with POD, Shaffer has produced a number of books in homage to Ruscha's, such as A Few Pommes Frites (2012) [the limited-edition box includes scans of every french fry in a McDonalds small fry bag, and is packaged with the empty bag, receipt, and a napkin], Reworded (2012) [as seen in the teaser image for this post—poems composed from, and typeset like, the text from Ruscha's paintings in a given year], and  Thirtyfour Parking Lots (2008) [Google satellite images of the parking lots from Ruscha's 1967 book]. One might imagine a syllabus that pairs his NYSE: CBL Mall Maps (2010) with Rob Fitterman's Sprawl: Directory, both of which draw attention to the homogeneity of shopping mall geography.

Reworded was created as part of ABC's group project ABCED, a collection of POD books created in honor of Ruscha's 75th birthday (and only available until his 76th, in December 2013). The alphabetical inversion in the project's title alludes to its unifying theme—the appropriation of and dialogue with Ed Ruscha's works. All of the books have been given past-tense verbs for titles, a gesture that both describes their process ("Abstracted," "Colored," "Collected," and Rorschached," for example) and evokes the "ED" to whom they are indebted.

Tony White, a book artist and Director of the Decker Library at Maryland Institute College of Art in Baltimore, recently made the case for considering such books "Artists' publishing," rather than "artists' books," in talks at Camera Club, New York and at the conference of the Art Libraries Society of North America. Such a distinction makes sense, given the engagement of these artists with mass-publication and the democratic multiple. I will be interested to hear more on the subject at CAA in Chicago in February, where White is chairing the following panel:

"It is what it is: artists’ books or artists’ publishing

Many artists, photographers, and graphic designers who are creating artist’s publications for the first time in this century are using the internet as a collaborative community, and creative publication ideologies are in flux. Many of these artists are attempting to re-categorize, rename or even re-establish their publication types as innovative and new, no longer as artists’ books or zines, but as something different. This flux is in large part due to the development of new online communities and networks for production, distribution, sales, and exhibitions, that have been transformed by the world wide web, print-on-demand technology, and the cultural and ideological transformations among artists and designers actively engaged in self publishing and DIY printing.  This has led to a shift away from using the phrase artists’ books, to artists’ publishing, when describing this new paradigm.

Participants on this panel will discuss and address the following questions, among others.  What is the impact of this paradigm shift on the genre of artists’ books? How has the availability of print-on-demand impacted these publication types? Does it matter? Who produces them and why?  How and where are they sold, and to whom? What is the role and impact of internet distribution and sales? How is this impacting the form and content of these publications?" The ABC collaborative has produced a number of wonderful books that are intertextually linked to Rusha's.

Among those of interest:

Elisabeth Tonnard's Recounted (full disclosure: I am a big fan of Tonnard's work, and plan to profile her in a future commentary), which provides "textual snapshots" of Ed Ruscha's Nine Swimming Pools and a Broken Glass, using descriptions of swimming pools extracted from American novels published before 1968 (the year Nine Swimming Pools was published). Sources include Lolita, The Great Gatsby, and Double Indemnity, among others.

Also Eric Doeringer's Stained, an interactive book providing an index of 76 stains, from  L.A. tap water to "Blood Of The Artist," with which the reader can recreate Ruscha's 1969 boxed set Stains. Doeringer's many recreations of conceptual artworks include Real Estate Opportunities, which revisits the same vacant lots Ruscha photographed in 1970 and records their current state.

And see Paul Soulellis's Stripped: Sixty-Six Sunsets Stripped, which includes images of the sunset "stripped" from Google Image and lined up in strips along the top and bottom of the page in the manner of Ruscha's Every Building on the Sunset Strip.

Soullelis also has a fascinating body of work and is himself tracing the use of appropriation in contemporary artists' books, particularly appropriation facilitated by digital media. His Library of the Printed Web is an invaluable (and growing) catalogue of such works. Soulellis theorizes this shift in an excellent blog post, "Search, Compile, Publish,"  where he describes the project this way:

"Almost all of the artists here use the search engine, in one form or another, for navigation and discovery.

In fact, I would suggest that Library of the Printed Web is an archive devoted to archives. It’s an accumulation of accumulations, a collection that’s tightly curated by me, to frame a particular view of culture as it exists right now on the web, through print publishing. That documents it, articulates it."

Soullelis is doing some excellent work cataloguing this emerging field. His tumblr is essential reading.

Twenty Six Gasoline Stations digitized and described by the Tate as part of the Transforming Artists' Books Workshop (August 2013).

"The Royal Road to the Unconscious was conceived by the artist Simon Morris in order to conduct an experiment on Sigmund Freud’s writing. Utilising Ed Ruscha’s book Royal Road Test as a readymade set of instructions, seventy-eight students cut out every single word from Sigmund Freud’s Interpretation of Dreams. On Sunday, June 1st, 2003, the artist, Simon Morris (thrower) threw the words out of the window of a Renault Clio Sport on Redbridge Road, Crossways, Dorset, travelling at a speed of 90mph, approximately 122 miles southwest of Freud’s psychoanalytical couch in London. The action freed the words from the structural unity of Freud’s text as it subjected them to an ‘aleatory moment’ – a seemingly random act of utter madness."

Jon Rafman, 16 Google Streetviews (Rafman has made trawling street view an art, and has amassed some amazing images, available at his site.)

Also see the following related material at this site:

Rick Prelinger on the art of appropriation at Kelly Writers House