I went to Brown in March as an “artist in residence” for Interrupt3, a three-day conference on the intersection of art and text and digital things. I was anxious when I arrived because in the days before leaving people had asked me repeatedly what I would make once I got up there. I had no idea.

As soon as I arrived in Providence, I began seeing signs with the words “Imagine Brown” everywhere. They were on lampposts and banners and posters all over Brown’s (quite white — qhite?) campus.

The original call for work for our journal Area Sneaks sought “to touch the live wire where language and visual art meet.” The very real divide between poetry and visual art, as we saw it in 2007, is where we discovered this metaphorical live wire. The figure of the area-sneak, a term borrowed from Charles Dickens, proved to be our principle guide.

Of theology, forms, and absence

What writing isn’t conceptual? This is what a pundit might ask.

My last post explored book artists who work conceptually using print-on-demand technology, but the use of conceptual methodologies extends to those who work in hand-made books as well.

This summer and fall, I have spent time in special collections at the University of Washington (partly in preparation for the Affect and Audience in the Digital Age symposium, and partly to find books for my spring workshop).

The tension between the book as individual copy and as mass reproduced object is reframed and even collapsed in samizdat literature, the illegally copied and circulated typescripts that created an entire world of literary and intellectual life in the late-Soviet period. Samizdat texts were reproduced, four or five copies at a time through the act of retyping and the use of carbon copy. In these works, the acts of writing, copying, and publishing effectively fuse.

Beginning in the 1970s, conceptual writer and artist Dmitri Prigov sought to investigate the relationship between text and copy in laboriously reproduced samizdat texts, which in spite — in fact because — of their poor quality became fetishized objects for members of the Soviet samizdat community. Prigov exploited the nature of the samizdat text to produce singular works in which the materiality of the book plays a key role. At the same time, he stressed the relationship between the writer and copyist, between unique work and reproduction in samizdat book culture.

Gerald Janecek on the 'Alphabet' poems

Today I present a guest post from Gerald Janecek, who has contributed so much to our understanding of the visual, verbal, and sonic breadth of Russian avant-garde poetry from the beginning of the twentieth century to the present day. Jerry’s and my shared interests include the work of the conceptual artist and writer Dmitri Prigov, whose iterative practice spanned a vast range of genres and media from sculpture to performance, poetry to theatre. Some time ago, Jerry shared with me an extraordinary video of Prigov performing with the musician Vladimir Tarasov in the apartment studio of Ilya Kabakov in Moscow in 1986. Below, I present part of this video: Prigov and Tarasov’s performance of the 49-aya azbuka or 49th Alphabet from Prigov’s Alphabet series (you can read the Russian text here). Jerry’s commentary on the work and its performance follows. Together I hope they will serve as an introduction to a writer and artist who deserves to be far better known in the English-speaking world. 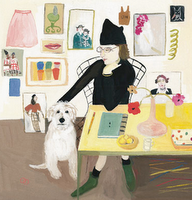 The students in our CPCW/Writers House/ICA year-long seminar are hosting a DIGITAL SWAP MEET. It runs in conjunction with the Maira Kalman exhibit “Various Illuminations (of a Crazy World)” currently at the Institute of Contemporary Art, and is the realization of a project called MILTON. Maira Kalman envisioned Milton as a conceptual space for pleasure and exchange, and DIGITAL SWAP MEET esteems those qualities above all others.

Come upload, download, snoop, peruse, and plunder during this four-day media swap. We’ll provide the configuration, you provide the data. Bring your computer and hook in to each of our four drives to view their contents. Within our four terabytes of space, you're sure to encounter something eye-catching to take home with you, and to find room to upload your own files.