--___--- brought me several Star Wars books … The guards wanted to be baptized with the names of [Star Wars] characters … “From now on we are the ---__--- and that’s what you call us … I eventually learned from the books that ----____----- are sort of Good Guys who fight against the Forces of Evil. So for the time being I was forced to represent the Forces of Evil, and the guards the Good Guys.

Jordan Scott: After conducting a yearlong clearance review, the United States Southern Command (USSOUTHCOM) granted me permission in April 2015 to visit Guantánamo Bay as a part of a Media Tour. I spent five days touring the facilities. I was taken through almost every site on the premises: the Medical Center, where force-feeding was explained and demonstrated; the Detainee Library, where I was allowed to browse many of the approximately ten thousand volumes of books and magazines available to detainees; Camp VI, where I was allowed to view detainees “going about their day”; Camp Justice, where trials are held; Camp X-Ray, the first detention facility built at Gitmo, which is now completely overgrown and where I was allowed to walk through the cells, staging areas, and interrogation booth in the afternoon and at night; and Camp Iguana, the juvenile detention facility where Omar Khadr was held.

The frontispiece of my press kit read:

I was never left alone at Gitmo, though I was permitted to collect a variety of field recordings and write poems and notes on my iPhone. For security reasons, I was not permitted to record what one public affairs (PA) representative referred to as “nonpermissible human voice.” I attempted to record everything else, and I transcribed as much overheard speech as I could.

When it came to photographs and video, members of the Media Tour were prohibited from capturing “frontal facial views, profiles, 3/4 views, or any view revealing a detainee’s identity,” according to a May 2014 document titled “Media Policy at Joint Task Force Guantanamo (JTF-GTMO)” (available at Lanterns at Guantánamo). In other words, as one PA representative told me, “If their mother can’t identify the detainee in the photo, then it’s a good photo.”

Every day of the tour ended in the same way: with an Operational Security (OPSEC) meeting. At these meetings members of the media were made to show PA representatives our photos, audio recordings, videos, and “other artistic renderings,” in case any of them constituted what is referred to as Operational Protected Information. The document titled “Media Policy at Joint Task Force Guantanamo (JTF-GTMO)” provides a lengthy definition of Operational Protected Information such as “deliberate views of security protocols including security cameras, metal detectors, locks, keys, gates, reinforced doors or other security measures,” and outlines the steps taken when these rules are violated:

During the OPSEC review, imagery and audio that are determined to be in violation of these ground rules will be deleted or cropped to achieve compliance. For photographs, the NMR may request ten (10) images per person per day be cropped to meet security requirements. Cropping is defined as cutting off the parts of a digital photograph deemed to be in violation. Blurring, smudging, fading, superimposing a black line or spot over certain parts of a photograph, or any other digital manipulation is not a substitution for cropping.

While at Gitmo, I was permitted to visit the Detainee Library. The library houses a preapproved collection of books, magazines, and DVDs for detainees’ use, but the prisoners are not themselves allowed in the library. The collection is housed in a dozen steel trailers connected by a long hallway. Paintings made by the detainees from 2003 to the present line the hallway that connects the trailers where the library is housed. This space is called the Detainee Art Gallery. The works in the gallery are arranged in chronological order, and the development of the artists’ technique through the years is evident. The paintings begin with what I assume are landscapes of the artists’ homelands: They include images of deserts, stone ruins, bazaars, mosques, fruit, and camels. As the years progress, the paintings come to address what I can only describe as pastoral North American images: sailboats, red barns, conch shells, teacups, horses behind white fences, and oceanfront cottages. Carol Rosenberg writes that as of February 2018, the paintings, once a “proud fixture of media visits” to Guantánamo Bay, have “vanished from prison materials that reporters are allowed to see in the aftermath of a new policy forbidding the release of artwork by war on terror detainees.” Rosenberg quotes the prison’s cultural adviser, who blames “the new ban on defense lawyers who decided to display it in an exhibit in New York City.”

After my tour of the library was complete, I asked the PA representative if I could have access to the entire catalog of items housed in the Detainee Library. I recall him saying that no one had ever asked for this before. I remember that he left briefly to call his superior about my request, and that when he returned, he informed me that I’d have my answer by the end of the day. Shortly after dinner, the PA representative said that they could not release the document, and instead offered me his cellphone, where I could view the PDF file for “several minutes.” Upon returning home, I enlisted the help of Stephen Voyce in filing a FOIA request with the United States Department of Defense so that I could view the catalog in full.

On December 7, 2015, long before the controversial exhibition at John Jay College of art from Guantánamo Bay, we also filed a FOIA request with the Department of Defense for records related to artists and paintings (along with images) included in the Detainee Art Gallery. The DOD responded to this request on August 6, 2018. The two documents included in this Jacket2 feature include the DOD’s written response to our FOIA request and a file containing the approximately 228 paintings and drawings by detainees at Guantánamo Bay.

Stephen Voyce: I received a message from Jordan Scott in the spring of 2015. He was making last-minute preparations to visit the Guantánamo Bay Detention Center, having been credentialed to do so as a poet (rather than as a reporter). I had been researching the history of the Freedom of Information Act for a paper entitled “Reading the Redacted.” The essay’s purpose was twofold: to explain how this specific form of censorship came to be the preferred tool of military intelligence agencies, and then to document the prevalence of redaction in recent poetry and art, drawing on work by the likes of Philip Metres, Noor Behram, Trevor Paglen, and Mariam Ghani.

Just as I was nearing completion of that article, a March 2015 study conducted by the Associated Press found that the Obama administration had quietly done more to hinder FOIA transparency than any US regime since the legislation was enacted in 1967 — a trend that will no doubt continue under Trump’s presidency. Consider, for example:

Another statistic was also telling: 714,231 FOIA requests in 2014 marks an all-time high. Critical disclosures by WikiLeaks, Chelsea Manning, Edward Snowden, William Binney, and other individuals and entities have generated significant interest in FOIA by activist groups, journalists, academics, writers, and artists. Yet, filing a FOIA request is made so deliberately difficult there are entire organizations dedicated to navigating its onerous agency-specific protocols. The Electronic Frontier Foundation, the Federation of American Scientists’ Project on Government Secrecy, and George Washington University’s National Security Archive provide a range of essential resources. The last of these publishes a highly instructive “How to File” manual called Effective FOIA Requesting for Everyone.

The contents of the Detainee Library seemed uncontroversial by comparison with other high-profile requests by human rights organizations. We wanted to learn more about the guidelines for censoring reading materials at Gitmo and other military prisons, yet a query to Southern Command resulted in this heavily censored outline of the process for “material screening”: 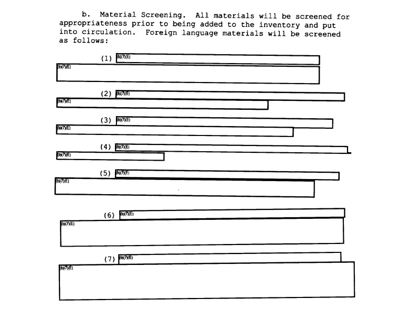 Writers at the Miami Herald received the same document, which redacts the seven-point criteria for screening materials. SOUTHCOM told Carol Rosenberg that “the information was blocked” because its release “would disclose techniques and procedures for law enforcement investigations or prosecutions, or would disclose guidelines for law enforcement investigations or prosecutions if such disclosure could reasonably be expected to risk circumvention of the law.” As it turned out, the scholar Muira McCammon would locate the list in the Camp Delta Standard Operating Procedure, leaked to Wikileaks in 2007, which reads:

The manual also indicates that a “Library Working Group” consisting of representatives from the Chaplain’s Office, the Joint Detention Operations Group (JDOP), and Psychological Operations (PSYOP) is to meet biweekly to “review library operations.” Apart from a handful of books being returned to donors (including a copy of Noam Chomsky’s Interventions), it’s not clear how these guidelines are being enforced.

Eventually we sought the help of Reprieve, an international legal organization that represents the victims of extreme human rights abuses, including, for instance, detainees at Gitmo and the families of drone strike victims. They put us in touch with representatives at the Office of Government Information Services (OGIS), an agency charged with resolving FOIA disputes and improving federal compliance with public records law. After two years of negotiations, we received a complete and unredacted list of the books and DVDs contained within the library and a complete catalog of the artworks produced by inmates during their incarceration. An additional inquiry for a list of banned materials has at the time of this writing gone unanswered. Notably, in November 2017, the US military officially declared that they would no longer permit detainees to keep the art they make, arguing that “cell block art” is government property and subject to operational security measures.

Scott and Voyce: The six hundred unclassified pages included here record what for many detainees is their only exposure to books and films over a fifteen-year period of incarceration, torture, and isolation. Most of these texts are written in English, while the library contains smaller selections of works in Arabic, Bahasa, French, and Urdu. The second file included here contains approximately 228 inmate paintings and drawings.

We make these two archives available to Jacket2 readers, along with the DOD response to one of our FOIA requests, so that writers, journalists, librarians, scholars, and activists, such that they might choose to study its contents.

Letter from the Department of Defense
Guantánamo Bay library catalog
Archive of detainee artwork
May 31, 2019

“FOIA request #SC 15–102-S: The Detainee Library,” a collection of materials curated by Jordan Scott and Stephen Voyce, emerges from their engagements with the Freedom of Information Act, which since 1967 has given the public a method of requesting access to records from any US federal agency, including records held by the US Department of Defense relating to the military prison at Guantánamo Bay. Scott and Voyce used FOIA to petition for access to two archives: the catalog of materials held in the detainees’ library at Guantánamo Bay, and the records related to artworks produced by Guantánamo Bay prisoners. This Jacket2 feature includes the six hundred unclassified pages that lists books and films in English, Arabic, Bahasa, French, and Urdu, as well as approximately 228 paintings and drawings by inmates included in the Detainee Art Gallery, in addition to correspondence relating to the FOIA request and a preface collaboratively written by Scott and Voyce.