Collom, Nguyen, and the domestic

In my last post, I referred to an at-homeness the “eco” implies (after the Green root oikos), and to alienated/naturalized binaries, that the errant poetics of Will Alexander might help us rethink. Indeed, the “household” trope is a timeworn frame for ecopoetics, promoted in my own rationale for the journal of the same name:

“ ‘Eco’ here signals—no more, no less—the house we share with several million other species, our planet Earth. ‘Poetics’ is used as poesis or making, not necessarily to emphasize the critical over the creative act (nor vice versa). Thus: ecopoetics, a house making.”

When I asked poet Robert Hass where he thought “ecopoetics” got started, he cited Gary Snyder’s Earth House Hold and Wendell Berry’s The Long-Legged House (both published in 1969) as the first notable titles in this area. I don’t know who coined the phrase “household Earth,” but I’m sure Stewart Brand, and his Whole Earth Catalog, had something to do with it—and/or Buckminster Fuller, and/or Gary Snyder, and/or that famous photograph of the Earth from space (1968/ ’72), with astronaut Edgar Mitchell’s comment: “It takes more than a moment to fully realize this is Earth . . . home.”

I have been reading a terrific manuscript by Jack Collom, Second Nature, a collection of essays and poems on ecopoetics, and a spirited defense of “nature” in a time of postmodern skepticism, in the works for many years (a recent issue of Bombay Gin, no. 36.2, celebrated twenty years of Collom’s “ecolit” classes at the Naropa Institute—though for some reason this issue is not archived at the magazine website), in which he defines ecology as, “literally ‘knowledge of the house.’ In the sense that our house is now the entire world, the study of ecology has come to be a comprehensive study of the relational--the spreading interdependence of all things.” I took the photograph above, through the dirty car window, of a deer on the lawn right across the street from Jack Collom’s and Jennifer Heath’s house, this past June. Typical Front Range intersections? For Collom, at least, the “house” of ecopoetics is one of difficult interdependence, rather than easy autonomy:

My workroom is a slice of porch wedged between kitchen and garden. Unbroken stretch of window east and south, great greenleaf vistas. Outside one window hangs a feeder (abandoned now), then frequented mostly by house finches. Squirrels would scoot along the very narrow sill and look up longingly at the seed-laden plastic cylinder just a little too high above their heads. I was treated to many an intense underchin view—only a foot away from me—as they stretched and calculated. Some tried the leap . . . and clattered to the ground.
But Maeve was lithe, and actually able to spring, grab, hang on and feast. There were complications too tedious to explicate involving nearby vines as well, but the main upshot was I cut a slat of plywood and nailed it to the sill below the feeder—slanting between window and sill—to foil Maeve’s leaping forays. 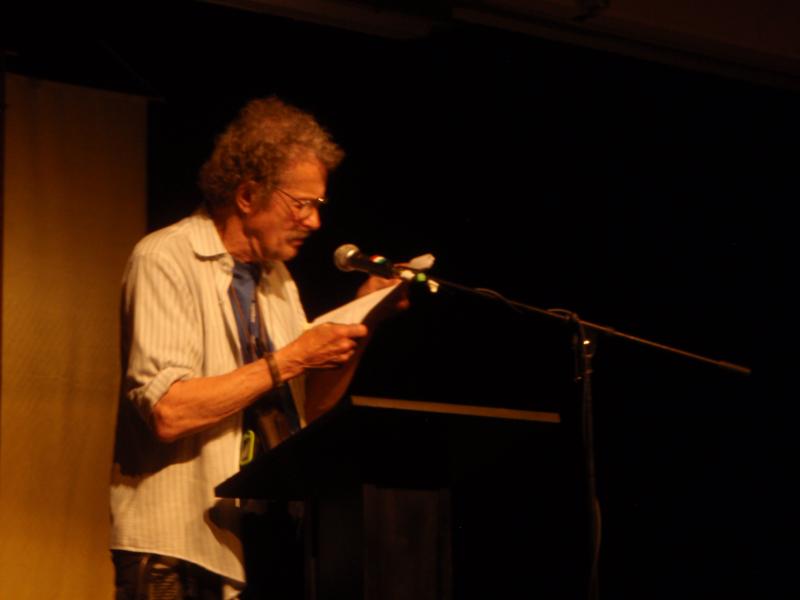 Then the brave and dogged creature began to eat the plywood, to regain her flat launching pad, and . . . perhaps the wood was toxic . . . perhaps some sly neighborhood cat . . . Maeve disappeared.
We were bereft.
No other squirrel since her day has come close.
(from “Lumping and Splitting”)

Co-editors Marcella Durand, Andrew Schelling, Elizabeth Robinson and I are preparing Second Nature for publication with Instance Press later this year, in celebration of Jack’s eightieth birthday. Contact ecopoetics if you would like to subscribe for a copy. And read Collom’s poetry: the classic is Arguing with Something Plato Said (Rocky Ledge Editions, 1990), now out of print, though a good chunk of it is collected in the excellent Red Car Goes By: Selected Poems 1995-2000 (Tuumba Press, 2001), edited by Reed Bye, Clark Coolidge, Larry Fagin, Merrill Gilfillan, and Lyn Hejinian. Exchanges of Earth & Sky (Fish Drum, 2005) offers an exquisite meditation on volatility, in body, mind and word—both Erik Anderson and Cole Heinowitz have written sensitive, thought-provoking reviews for Jacket. Collom’s collaboration with Lyn Hejinian, Situations, Sings (Adventures in Poetry, 2008), is also a lot of fun. Kasey Mohammed wrote a good review of it for Constant Critic.

In her introduction to the illuminating “Women and ecopoetics” feature she edited for how2, British poet, editor and ecocritic Harriet Tarlo (who has just issued an anthology of Radical Landscape Poetry, with Shearsman Press) critiques the household trope: “the home-making analogy is still uncomfortably domestic in its connotations, suggesting the human’s residence on earth as the centre of the universe. By metaphoric extension, the human ecopoetical product (poem or critical work) is also seen as the all-encompassing centre. . . . All this centring of experience in the ‘house’ of the poem is reminiscent for me of the biblical Adam creating his dwelling place, naming his wife and his animals in the manner of the patriarchal Jehovah.”

On the one hand, Tarlo’s critique seems to assume that the work of the poem is one of centering, whereas “house making” could be more verbal than artifactual—working, in fact, to decenter the poem from poetics, to place the artifact in an expanded field. On the other hand, the gendering of the “whole earth” cultural front speaks for itself, and the feminist critique certainly stands.

Consider the poetry of Hoa Nguyen, which both celebrates and troubles at-homeness by sounding the boundaries between household and earth: 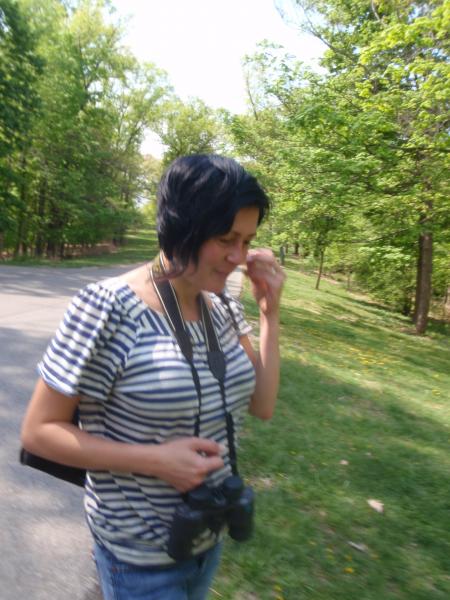 Hecate doesn’t fucking
need you or your loving

Of childbirth, & the post-partum body, uprooting, in(ter)dependence, affection, squirrels, economics, and, of course, the lyric—“Thoughtless thoughtless dreamy squirrel”—Nguyen’s fierce care (including an oak joke) digs up the backyard of any patriarchally sheltered household (Hecate “doesn’t need you”). The final nominative line (as to name the poem, and the book from which it is drawn, Hecate Lochia) breaks the lyric chain obliquely, embedding the oak in sounds (“lochia”) the poem won’t echo. (Nguyen has spoken—in an email conversation with Ryan Gallagher’s students—about not knowing how to pronounce her own name, with the proper accents, being born into a language she cannot speak, and how she sometimes thinks she writes poetry toward these “lost cadences of sound.”) Nguyen’s poetry cracks open the home, the way Collom’s tragically avid humor does, to a landscape of difficult interconnections.

Here is a video of Nguyen reading another poem from the same collection, “We Might be Folding,” at the Tulsa (New York) School Conference, November, 2009 (with apologies for the poor sound, but at least it conveys Nguyen’s dynamic, eye and hand gestural reading style). In this eco-collapse poem, the “boy scouted” speaker (who never learned how to start a fire without matches) asks, “Are grackle eggs edible?” She admits to “gauzy” bee-keeping dreams and to wondering whether she should “really collect shoes/ of future sizes            for our boys’ feet,” in a time when, “Polar Bears are melting in the drowning spaces.”

Poet Linda Russo has been writing a series of what she calls “Yard Works,” which you can look for an excerpt from, along with a short essay on the project, in the upcoming ecopoetics issue of Interim magazine (edited by Chris Arigo, Matthew Cooperman and myself). For Russo, yard and poem are analogous, as frames for concentrating attention—on landscape, economics, human-nonhuman interactions, the whole “field of perpetual conflict.” Tarlo’s how2 feature includes an essay by Russo, “Writing Within: Notes on Ecopoetics as Spatial Practice,” wherein she concedes that, “My bioregion, then, is not my artificially-defined yard (from the Old English, geard, meaning enclosure). Although it poses a handy perceptual limit, my traversions into the life of birds and other nonhuman life-systems only begin there.”

Tarlo’s remains a cogent critique, along with all the other good reasons for questioning talk of the “homeland.” (I’ll look at her anthology, The Ground Aslant, in another post.) For ecopoetics, “household” has offered a transitional trope, between ecoliteracy (e.g., knowing one’s way around the night sky, as a familiar kind of celestial “garden”) and evolutionary perspective, realizing humanity’s marginal place in the scheme of things (i.e. we look, with a mutant sweepstakes consciousness, into the night sky as into “outer space”).

Environmental ethics seem to entail both perspectives—just as Aldo Leopold, in A Sand County Almanac, celebrates the familiarity of an old board, reading its “autobiography” within the seasonal patterns of his adopted “sand county,” at the same time that he admires the strangeness of the Sandhill crane, which knows humanity a lot better than humanity knows it (since cranes have been around about twice as long).

I suppose my use of “house” has entailed equal parts idealism and pragmatism, thinking of it as a big household we are bound to share with all kinds of people and species we don’t necessarily agree with or even “get along with.” The idea being that we need to get creative about living together, rather than stay all alienated.

The irony, of course, is that the so-called “aliens” have the most to teach the household about difference. Especially given searing inequality. In my next post, I’ll look some more at ecopoetics as rethinking the household from alien, uprooted perspectives.