This show indicted modernist architecture as “an aesthetic style—an abstract form in a landscape, photographed aerially and devoid of social relations[, whose i]conic buildings, formalism, and myopic obsession with the upper class . . . became the hallmarks of much American architecture.” Into the Open’s installations ask architecture “to mitigate its current celebrity obsessed approach, encouraging instead a new type of collaborative thinking about design and space that highlights local, periphery, and even edge conditions.” Into the Open includes work by The Center for Land Use Interpretation, The Center for Urban Pedagogy, Design Corps, Detroit Collaborative Design Center, Gans Studio, The Heidelberg Project, International Center for Urban Ecology, Rebar, The Edible Schoolyard/Yale Sustainable Food Project, and Estudio Teddy Cruz, amongst others.  (This interactive map offers a rewarding, virtual tour of the exhibit) 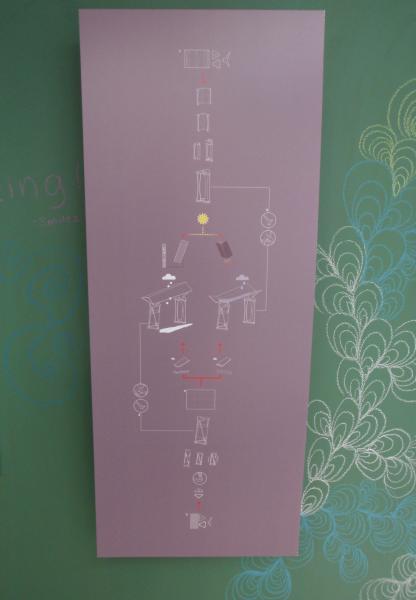 Gans Studio’s Roll Out House, “manufactured of lightweight, flexible materials, provides a physical and social infrastructure and a humane solution to the challenge of being uprooted from one’s home.”

Teddy Cruz’s 89 foot photo narrative of the U.S.-Mexico border is a spatial installation that reverses the typical use of murals (to camouflage power relationships), making the poetics of form transparent to political and economic realities. Cruz’s map of the “Political Equator” diagrams how “micro-heterotopias that are emerging within small communities across the city, in the form of non-conforming spatial and entrepreneurial practices, are defining a different idea of density and land use, setting forth a counter form of urban and economic development that thrives on social encounter, collaboration, and exchange.” 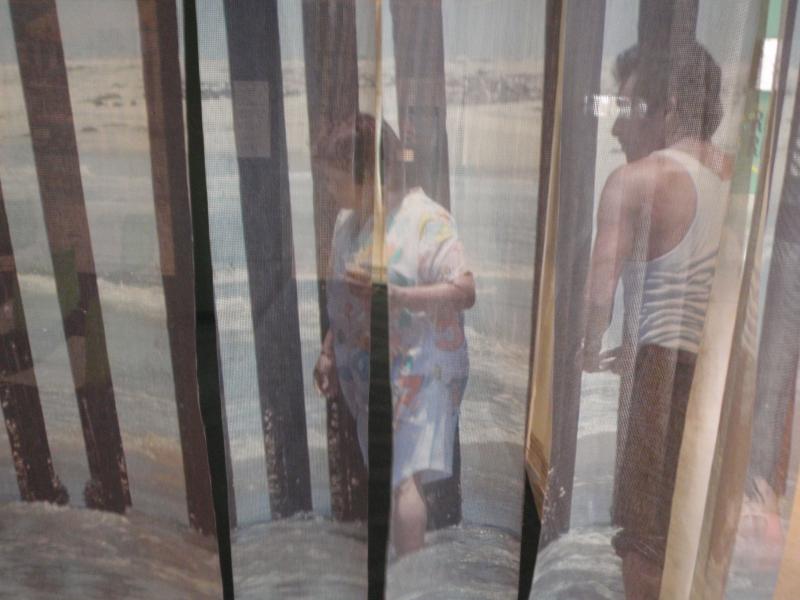 Cruz, who collaborates with writers such as Mike Davis or Aaron Levy, has only semi-ironically proposed a “transitional architectural system” called Manufactured Sites: “a maquiladora produced prefabricated frame that acts as a hinge mechanism to mediate across the multiplicity of recycled materials and systems brought from San Diego and re-assembled in Tijuana.” His structure makes visible the two-way flow of border-crossings in the NAFTA zone: “While ‘human-flow’ mobilizes Northbound in search of dollars, ‘infrastructural waste’ moves in the opposite direction to construct an insurgent, cross-border urbanism of emergency.” Cruz’s advice for poets (or makers of any stripe)? “Instead of getting identity packaged in styles, look at the deeper operations.” 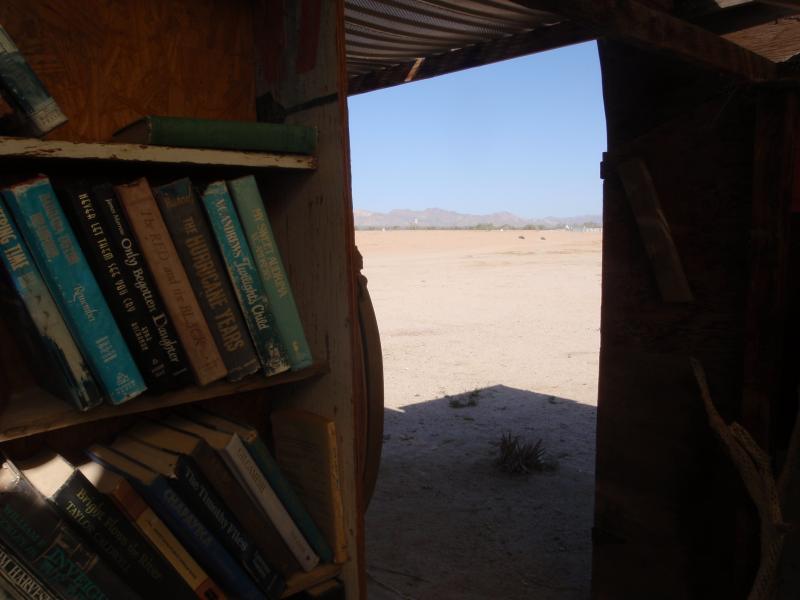 I think also of Charlie Hailey’s acronym-studded, encyclopedic guide, Camps: A Guide to 21st-Century Space (MIT Press, 2009). Hailey’s book charts the multiple dimensions of the camp, “whether as a place of trauma, strategy, or incomplete liberation. . . . organized into three categories of response: autonomy, control, and necessity.” While camps share with homes the poetics of spatial production, camps mark spaces both open and closed, neither temporary nor permanent.
(Slab City library, near California’s Salton Sea.)

These are often what philosopher Giorgio Agamben might call spaces of “emergency” or “exception,” spaces falling “at the intersection of sovereign power and political exception in which punishment can occur outside of preestablished juridical (or sacrificial) norms and rules.” Thus camps of control and/or necessity are also met by autonomous camps:

“The growing number of detention centers and zones d'attente has also elicited responses from protesters, who, often citing Agamben, set up camps adjacent to these concretized states of exception. In an increasingly visible extraterritorial environment, a network of protest camps now interrogates the detention camp’s extralegal permanence.”

Artists Rene Gabri and Ayreen Anastas set out to answer the question, “How is it that a camp like Guantanamo Bay can exist in our time?” Their project embraces the dual “campaign” format: “camp as object of protest and camping as artistic practice and field research.” Gabri and Anastas waged Camp Campaign from their “mobile studio/billboard/library” van, traveling, conducting interviews, and investigating diverse sites ranging from detention camps to summer camps.

The image at the top of this post depicts Camp Climate in front of Yorkshire, England’s Drax power plant. Is this a good architectural image for ecopoetics? “Protest camps,” writes Hailey, citing examples as diverse in scale as Cindy Sheehan’s 2005 Camp Casey outside G.W. Bush’s Texas ranch or the massive “Asamblea Permanente,” the 2006 occupation of Mexico City’s Zócalo by supporters of presidential candidate Andrés Manuel López Obrador, “are often event-specific . . . reactions to long-standing policies or ideologies. . . . As a communal space of autonomy, the protest camp provides visibility to a group’s message and at the same time affords a cohesiveness that partially insulates its members from public exposure.” Camp Climate follows on the legacy of the Greenham Commons womens’ Peace Camp, that ran from 1981 until 2000, or Faslane Peace Camp, continuously occupied since June 12, 1982. These camp actions have benefited from the UK tradition of the “commons” and its system of regional councils and land-access rights. Cruz’s projects seem to suggest that the NAFTA “free trade zones” might be exploited to similar effect. What systems and traditions, here in North America, might permit more extended acts of protest camping?

What might it mean to approach ecopoetics as a making of “transitional architectural systems” rather than of foundational dwellings? For all the charged ethics built into a poetics of “humane solutions,” or of “extreme architecture,” ecopoetics is bound to face the uprootedness, restless nomadism and displacement, if not a sense of utter homelessness, that are a part of its Enlightenment Darwinian heritage as well as of the contemporary political, social and economic moment. The poem as camped out, with “no destination or home,” attuned to a global rather than a homeland front. It may be that the camp is a better architectural and spatial analogy (than the house) for the poem, any poem. But there also may be a poetics specifically oriented to nomadism. 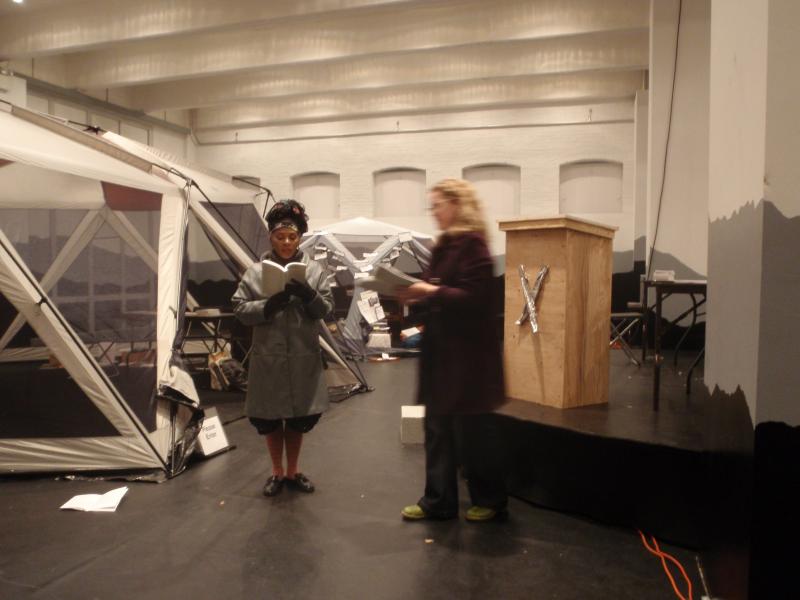 One thinks, of course, of Pierre Joris’s tireless work against “mother tongue” hegemony, his elaboration of a “noetics,” and his current project translating (and anthologizing) Berber and other poets of the Maghreb. (Check out this fantastic interview.) But also of poets whose work is “camped out” at the site of various institutions and discourses, operating an open-ended institutional critique. Lisa Robertson’s investigations of the gendered vectors of the pastoral (XEclogues), and of “talk about the weather” (The Weather). Jill Magi’s forthcoming book, Cadastral Map, interrogating the pastoral boosterism behind American real-estate, how it has become a habit of our vernacular. Yedda Morrison’s staging of the social constructedness of factory and agricultural labor (Crop). (Reviewed here by Linda Russo.) Ian Demsky’s massive documentary poem on the Deep Horizon oil spill (excerpt forthcoming in the Interim Magazine ecopoetics feature). Or poetry that moves out of the self-contained “house” of the poem altogether, like Rodrigo Toscano’s “Collapsible Poetics” theater, exacerbating the spaces (excruciating, in the current political climate) between action and words. I think of Aaron Vidaver’s book-length documentation of a confrontation between residents of the Woodwards Squat and Vancouver police, Woodsquat (published as an issue of West Coast Line, 37/2-3), to be an epic work of poetics, an ecopoetics in its multi-faceted (and multi-voiced) attention to the  fraught vectors of dwelling in a globalized, neoliberal police state.

I would like to heed Teddy Cruz’s emphasis on heterotopias, that the micro-community and its non-conformism not be a refuge of homogeneity. This is easier said than done. Ecopoetics as camping would need to get not just out of the house but out of the art gallery and (coffee shop/ bookstore/ lecture hall) venue, out of the “scene.”

A couple of years ago, I took up artist Fritz Haeg’s invitation to colonize some dome tents he had set up at Artbook@X, in New York City, as part of his Dome Colony project: I organized a “launch” for issue 06/07 of ecopoetics. The event, mainly due to the shortcomings of my own last-minute organizing, but also perhaps because it did not site itself in any of the expected venues, was attended only by the performers (Rodrigo Toscano, Thom Donovan, Emily Abendroth, Luis-Aguilar Moreno, Julieann Brownton) and one or two “audience” members, including Drew Gardner, who ended up participating as much as the rest of us. Here are a couple of clips from that afternoon, camped out with some of my favorite poets of the oikos:

Julieann Brownton: “Malachi the bumblebee” (reading “Memory Day,” published in ecopoetics 06/07 -- watch to the end for the fun part)