Looking up from 'sparrow,' with Dan Beachy-Quick

While I said I would write about nomadic poetry architectures, I got caught up reading some books I need to return to the library. One of them is Dan Beachy-Quick’s  This Nest, Swift Passerine, a book-length meditation on love, sparrows, sight, orb spiders, language, self and other, in the transcendentalist tradition Beachy-Quick has made so particularly his own. It is also a thorough demonstration of poetic intertextuality as nesting. (In his previous collection, Mulberry, Beachy-Quick imagines writing poetry as a silkworm’s work, “the weaving back and forth, as the head moves almost unnoticeably left to right and right to left as one reads, of those leaves I had devoured, those pages I read.”) Into his own looping syntax, the poet weaves “Themes” from Charles C. Abbott, Martin Buber, Emily Dickinson, Ralph Waldo Emerson, Meister Eckhart, Ronald Johnson, Edward Taylor, Henry David Thoreau, Leo Tolstoy, Dorothy Wordsworth, amongst others.

One startling phrase on the last page pierces the reflective surface: “there is the grocery list/ from winter sewn into the sparrow’s nest.” “Here,” the poet goes on to write, “are the pages in which I nest.” I like this referencing a brutal material plane, where different orders come into a mute sort of contact. The relationship between bird and human, between the referential and the intertextual nesting (between interspecies and intraspecies), or between nesting somewhere and nesting “within,” is not constrained within the Emersonian surfaces on which the poet chooses to reflect—or so I’d like to think.

I once wrote an essay on Ronald Johnson’s poem “Ariel’s Songs to Prospero” (ARK 37), comparing the centered forms, stanzas ‘quilted’ from the language of Peterson’s A Field Guide to Western Birds, to birds’ nests. (I was also thinking of Emily Dickinson’s “I was  a Phebe – nothing more – / A Phebe – nothing less – / The little note that others dropt / I fitted into place –”)

pale ghost-bird of the inner eyrie
silvery over and over
body in strong light, radial
at a distance, only the hollow long-drawn whoooooooo
tooit-wit winnowing an almost touching elsewhere
in bright yellow lines, twinking flight to flesh at “window”
“eyed on back of head” at night in spring
in endless succession
as it walks
the rip-tide paradisaea

Emily Dickinson wrote that the earth is “a Nest, from whose rim we are all falling.”

But how far do such comparisons take us into ecopoetics? Human fancy delights in the analogy (or, according to Levi-Strauss, human culture actually gets built out of such identifications and differences, in the mirror of nature). The care of poetry for such helpless things as sparrows is nearly a cliché  (passer is actually the latin for sparrow, even if passerine has come to designate the entire order of birds distinguished by feet that are adapted for perching, including all songbirds). Do “ecopoems” (& I’m not necessarily claiming that designation for  This Nest, Swift Passerine; Beachy-Quick himself makes no such claim) walk their talk of care for the natural world? What of the ethical knot of printing a poetical “bird’ nest” on paper pulped from the tree the actual bird nested in? Science, observation, and methods for probing beyond semblance—what do we know about the effects of the publishing industry on bird habitat?—become an ally here. Along with a light production footprint.

More than the transcendentalist riches, it is the poet’s attention to natural history—as in the list of different kinds of spiders’ webs in the first section of Beachy-Quick’s poem (cobweb, triangular, funnel, net, orb) and how these are woven through the surfaces of the poem—that I feel I can perch on. The more the poet draws me in to his web the more I am tasked with noticing phenomena, getting caught up in a nest of relations that are not all human language. “Poetry,” Beachy-Quick writes in his introduction to Mulberry, “riddles oneself with oneself by weaving one voice into many.” Can poetry also riddle someone with somebody by weaving a body into bodies? How do we get from the confusion of voices (the Wittgensteinian theme of “Daybook,” the culminating poem from Beachy-Quick’s first collection, North True South Bright) to a confusion of bodies? (And is such confusion desirable?) The material in Beachy-Quick’s nests that seems to draw sustenance from Ronald Johnson’s example, experimenting with concrete embodiments of “voice,” speaks most directly to me on this point. I also am drawn to those moments when the poem acknowledges that its work is incomplete, unfinished: “I look up from ‘sparrow’ to see sparrow.” 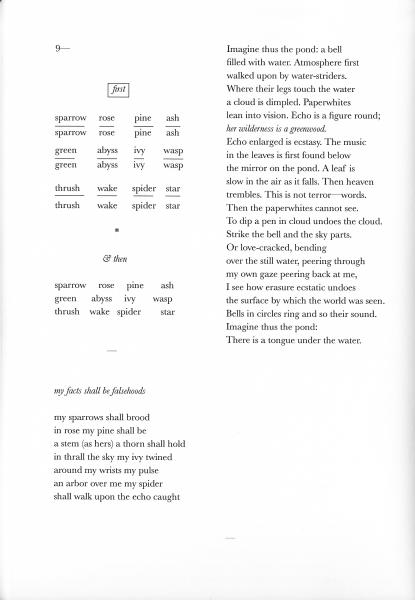