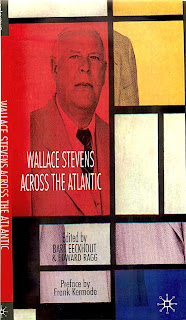 What does it mean to speak of this particular poet “in” Europe? His actual readership there? His effect on the poetics community? His relationships with individual contacts and correspondents there? Stevens in Europe; Stevens and Europe. “In” is critically a more effective term than “and,” in this regard, but it also requires higher standards of evidence and scholarship. “And” has always produced in Stevens criticism pairings suggestive at best, indulgent at worst: “Stevens and Zukofsky” (a real connection, and generative in terms of contemporary poetics); “Stevens and Heidegger” (a connection made by Stevens through a tiny bit of reading; otherwise a theoretical parallelism, and perhaps a troubling one and too dependent on the acuity of the critic). Miller’s essay here is titled “Stevens in Connecticut (and Denmark),” but the locatedness of the preposition is more persuasive than the collection-befitting conjunction.

Once the subordinating, situating in of the first section of essays gives way to the parallelistic and of part two—a portion of the book titled “transatlantic conversation”—the critical essayist is untethered, for both ill and good. Here we get the delightful piece of Krzysztof Ziarek once again considering, indeed, Stevens and Heidegger. Yes, Heidegger was definitively German, but the essay’s large concept, the “foreignness of poetry,” turns out to have only tangential connection to Stevens’s sense of Europe, a limitation that fortunately does not thwart Ziarek’s revisionist reading of an important late poem, “Of Mere Being.” Again, though, “mere being” is an existential condition more fundamental, more culturally unspecific, than can be obtained by the category “European.”

Across the Atlantic for Stevens were Anatole and Paule Vidal, his French art dealers (father and daughter), their aesthetic-mercantile eyes on the depressed and then war-torn republics; alas, the Vidals are seen only glancingly here. Barbara Church is briefly mentioned (her postcards from a postwar driving trip are sources for several cantos in “An Ordinary Evening in New Haven”), but she and her husband were crucial to the development of Stevens’s view of twentieth-century Europe: Henry and Barbara Church, exiled in Princeton, gave him his clearest sense of the failure of the interwar modernist small press and salon. 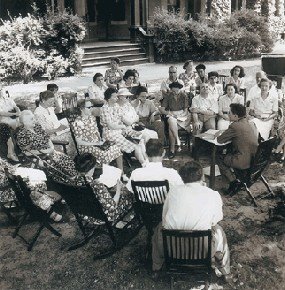 The Churches introduced Stevens to Jean Wahl, a French poet, detained by the Nazis in a Vichy camp; Wahl corresponded with Stevens and sent him a sheaf of poems in typescript, which we know Stevens read. Pitts Sanborn, Stevens’ Harvard classmate who was a writer and art critic and (as it turns out) fascist fellow traveler living in Germany through the 1930s, was another significant contact in the heart of Europe. Hardly did I lament the particular absence of Sanborn in Wallace Stevens across the Atlantic (he is a character perhaps best forgotten), nor rue the merely brief mention of Wahl by Edward Ragg in his otherwise good essay on Picasso and Cezanne. But I did generally miss a solid touching down upon the European ground of Stevens’s time. (I hasten to note that Mark Ford’s telling of Stevens’s connection to Nicholas Moore of the Fortune Press presents a plausible counter to my qualm.)

Above at right: Jean Wahl presents at a 1943 conference at Mount Holyoke College, where Stevens also gave a paper.

Through Paule Vidal, Stevens came in contact with the life and work of the Breton painter Pierre Tal Coat, a lyrical abstractionist, from whom the poet came to a particular understanding of the fate of the European artist at the moment, as Serge Guilbaut has put it, when New York stole the idea of modern art from Paris. Because he continued stubbornly to buy French works of art—in part out of a fetishizing of the Postcard Imagination—our American poet was working against the trend, the “American Century,” flowing mightily toward him rather than away. These were the sort of actual European forms and movements and Stevens knowledge of which tends to undermine the now infamously dislocated and oblivious but always powerfully contradictory notion of poetry as a description without (a sense of) place.

Feeling somewhat bereft of delineative particulars, I was greeted with the super-confident gesture implicit in Massimo Bacigalupo’s perfectly relevant and useful account of carrying Stevens’s American English over into Italian. Nothing could be more circumstantial or illuminative. Renato Poggioli, to translate the poems in 1954, queries the poet by mail word by word, seeking a culturally specific sense-making for a nation quite unlike the poet’s, balancing that with the untranslatable Americanness upon which Stevens, or at any rate the verse, insists. Bacigalupo (seen at right), a translator of Stevens himself, gives us essentially a memoiristic account of linguistic reckoning across the Atlantic. This, to me, is Stevens in Europe truly—at the level of the word.