[The recording of the deformance described in this commentary is here.] When Jed Rasula and Steve McCaffery assembled an anthology of historical avant-gardism called Imagining Language (1998), their goal was to find, “along the canonical spectrum, within the regulated normality of literature,” the various “occasional protuberances of another submerged order.” Wallace Stevens is nowhere to be found here, perhaps not surprisingly, among selections from the writings of Stein, Joyce, Whitman, Madeline Gins, Hugo Ball, Max Ernst, Lupino Lane, Armand Schwerner, Zora Neale Hurston, Marcel Duchamp, Jackson Mac Low, bp Nichol, Gerard Manley Hopkins, and others. Was Stevens not in the vocabulary of McCaffery, that pioneering member of Canadian sound-poetry performance group The Four Horsemen, or that of Rasula, the poet-scholar/network TV advisor who brought ABC’s Ripley’s Believe It or Not together with the same avant-garde Four Horsemen? The impression given that Stevens is not involved in Imagining Language as a project — similar to the assumption (incorrect, as it turns out) that Stevens’s effect would need to be somewhat repressed in order for Rachel Blau DuPlessis’s Pink Guitar to reclaim modernism’s radical tendencies — implies mistakenly that McCaffery, for one, has not deeply pondered Stevens’s relevance to his own poetic project. McCaffery’s “Some Versions of Pastoral,” chosen for Best American Poetry 2004 by guest editor Lyn Hejinian, responds to William Empson’s book of that name as an enabler of New Critical formalism with its downright pre-modern sense of place. But it also takes sides in the long-running debate between the alternative modernist legacies of Stevens and William Carlos Williams. Williams’s “No ideas but in things” — that founding motto for imagist-modernist privileging of word-world “contact” — received a much-belated rejoinder in Stevens’s “Not Ideas about the Thing but the Thing Itself,” the title seeming to align with Williams, even as the poem, consisting of external reality languaged, dourly satirizes Williams’s pre-postmodern naivete. In “Some Versions of Pastoral” McCaffery speculates: “Perhaps / no things but in ideas” — whereupon this “Best American” poem follows aptly from the editorial claim in Imagining Language of disputing the “institutional custodianship” that destructively tends “to protect the literary work from language.” So which version of modernism’s theory of words more conservatively “protect[s]” poetry from language? Was it Williams’s thing, or Stevens’s idea about the always-languaged thing? McCaffery’s poem re-opens the question.

Rasula and McCaffery joined a celebration of Imagining Language in April 2000 at the Kelly Writers House in Philadelphia. Although Stevens had been excluded from the book, his presence was felt on this occasion. I was there. “Much of the material in the anthology,” Rasula told me and the rest of the audience, “might be taken as offering templates for producing strategies for composing,” and Stevens — the same poet who operates in the background of Hejinian’s notion that “the mind being what it is, the very intention of rummaging changes what is found there” — would provide one of the “marvelous congruences” the editors sought. They wished to demonstrate, according to Rasula’s prefatory comment, “the extent to which language is inherently auto-productive." He proceeded to read an intertextual deformance of “The House Was Quiet and the World Was Calm.” Rasula had taken two Stevens poems of the same number of lines and then transposed vowels from one into the other. It was mesmerizing and gave me a new sound for hearing Stevens. Yes! When Rasula recited “The House Was Quiet” the vowels in each word had been chord-changed, borrowed from elsewhere in Stevens to alter the sound of the words from inside. Some words seemed to retract the vowel shift and sounded like Middle English. Some words become nonsense, while some became homophonic translations of the original. The “page” (the poem itself) became a peg. “Part” in the phrase “part of the mind” was rendered pert. The “reader” — the figure that had “leaned above the page” but had not really been reading it — was now a raider or a rater. Rasula’s disaffecting avowal of the Stevensean house stresses the poem’s restive, uncalm qualities and focuses listeners’ attention on words’ sound. Indeed, “The words were spoken as if there was no book,” an experiment truer than ever in Rasula’s rendering. 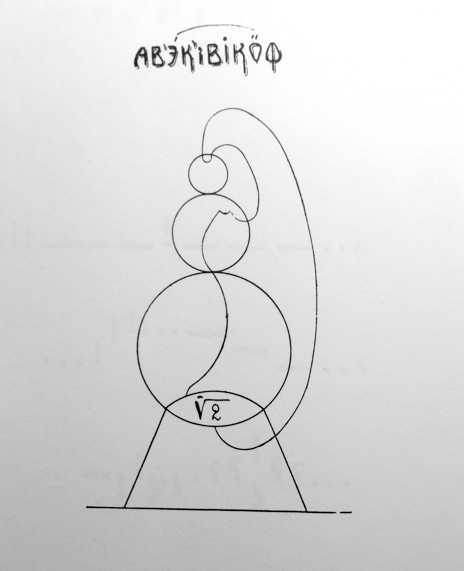 Oh, I observed above that Stevens is “nowhere to be found” in Rasula’s and McCaffery’s Imagining Language, and this is very nearly but not quite the case. His fleeting apparition is nonetheless indicative, for Stevens is conjured as part of a defense of poetic nothing. Among pieces by the Russian poet A. N. Chicherin reproduced in the section of the anthology called “Revolution of the Word” is a concrete poem called “Unto ages of ages” (A veki vekov) from Chicherin’s book Change and All (1924), possibly a constructivist response to Williams’s Spring and All (1923). “Unto ages of ages,” which suggests permanence and continuity, contradicts its elegant line-drawn snowman unless one interprets it as aligned with the idea of immanent mindfulness in Stevens’s “The Snow Man” (first published in Poetry magazine in 1921). Chicherin and Stevens are similarly engaged in “battles against ‘weightiness’” (in Chicherin’s phrase) — embracing in situ nothingness, or what Joseph Massey calls “illocality” (“nothing else / to contrast these variations of white”), although by no means rejecting profound or “weighty” ideas. The Zen modernism of “The Snow Man” is bare yet not semantically emptied, tending toward nullity. Chicherin’s constructivism has gone almost all the way, “progress[ing] to a point,” as Gerald Janacek has written, “at which no text is present.” Stevens’s man, a speaker whose mind is made of snow, his perception evacuated of subjectivity, still regards, beholds, and finally listens to ongoing nothingness. He invents from unmiserable sound a presence derived from absence. In their anthology Rasula and McCaffery pass quickly by the comparison, mentioning only that Chicherin’s “Unto ages of ages” “resemble[s] a snowman” and “rivals Wallace Stevens’s famous ‘The Snow Man’ who, ‘nothing himself, beholds / Nothing that is not there and the nothing that is’” on the way to asserting Chicherin’s title to be “enigmatic.” Yet what the editors say perceptively of Chicherin — that despite the works’ “meticulous cues for vocalization … the poems themselves begin to shed words until pronunciation is beside the point” — is an extraordinarily helpful gloss on Stevens, commensurate with Rasula’s own fresh bespeaking of “The House Was Quiet,” Susan Howe’s dwelling on Stevens’s house in “118 Westerly Terrace” (her verse inhabitation of Stevens’s calm, quiet suburban house), DuPlessis’s radicalizing Stevens’s Blue Guitar-style modernist improvising in Pink Guitar (in spite of Stevens’s own tendency to offer ideological “balancing”), and Joseph Massey’s offering of a special version of pointblank human displacement in his book Illocality (2015). As Massey puts it: “No / world without / delineation. No / thing until / detonated / into its word.”