[T]he spider carries within its web a complex picture of the prey it is to capture — its web is a map of and a counterpoint to the fly. — Elizabeth Grosz[1]

A pioneer in the field of ethology and biosemiotics, Jakob von Uexküll’s work has fundamentally transformed the way we understand the animal’s spatiotemporal extension by razing anthropomorphic perspectivism in the sciences, complicating our relationship (or lack thereof) to our nonhuman animal compeers while forcing us to rethink deeply internalized notions of anthroexceptionalism. Rather than judge organismal complexity through the lens of human rationalism, Uexküll asks readers to understand animals by how they condition (and are conditioned by) their umwelts (or “environments”). To do this requires adopting the animal’s “subject position” (because they are subjects) in order to understand how they make meaning of and in their world(s). Uexküll understands the animal’s “umwelt” as an imbrication of both “perception” and “effect” worlds, suggesting that animals (we mammals included) fundamentally coevolve with our environments. He accomplishes this by inviting the reader into the animal’s “encircling ring” in order to see the world through its engagement with the (an?) “outside.” He accomplishes this task most evocatively by inviting us into the the “function circle” of the tick, a by now quite famous illustration of animal otherness, in order to ask readers to entertain the possibility that world(s) (or a lack thereof) manifest differently — grow suddenly inscrutable when one shingles the outline of another. As a result, our understanding of an “outside” is fundamentally (and usefully) altered. Here’s Uexküll at work: 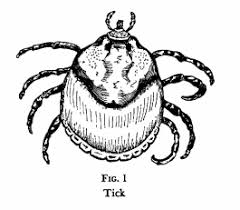 Once the [tick] has copulated, she climbs with her full count of eight legs to the tip of a protruding branch of any shrub in order either to fall onto small mammals who run by underneath or to let herself be brushed off the branch by larger ones. The eyeless creature finds the way to its lookout with the help of a general sensitivity to light in the skin. The blind and deaf bandit becomes aware of the approach of its prey through the sense of smell. The odor of butyric acid, which is given off by the skin glands of all mammals, gives the tick the signal to leave its watch post and leap off. If it then falls onto something warm — which its fine sense of temperature will tell it — then it has reached its prey, the warm-blooded animal, and needs only use its sense of touch to find a spot as free of hair as possible in order to bore past its own head into the skin tissue of the prey. Now, the tick pumps a stream of warm blood slowly into itself.[3]

Accordingly, depending on the organism’s physiology — its perception and effect organs — its “function circle” changes how the animal behaves, how it evolves, and how it develops in tandem with the complexity of its umwelt.

In the case of the tick, three perception marks — and three only — lead to the execution of its corresponding effects, “and then only in a certain sequence. From the enormous world surrounding the tick, three stimuli glow like signal lights in the darkness and serve as directional signs that lead the tick surely to its target.”[4] The olfactory organ scents out butyric acid, the only smell common to all mammals; tactile organs help the tick grip (and ultimately navigate through) hair follicles (another feature common to all mammals); and finally, a temperature organ allows the tick to sense warm blood.[5] As a result, the complexity of the animal corresponds “perfectly” (sez Uexküll) to the complexity of its umwelt, which surrounds the animal like a “soap bubble,” conditioning how it extends itself dynamically. 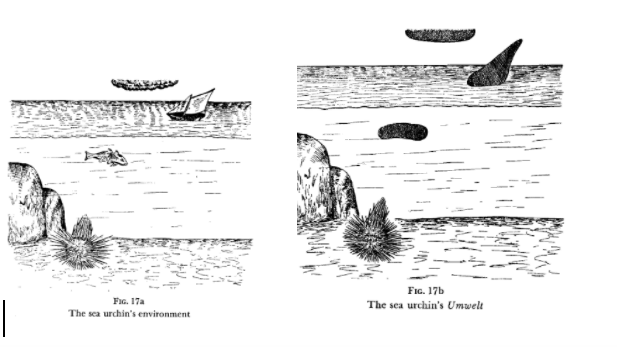 In his lecture course The Fundamental Concepts of Metaphysics: World, Finitude, Solitude, delivered over the 1929–1930 academic year, Heidegger took to calling this bubble “an encircling ring of possible disinhibition,” or, more succinctly, a “disinhibiting ring.” He wrote, “[W]e must say that life is nothing but the animal’s encircling itself and struggling with its encircling ring, a ring by way of which the animal is absorbed without its ever being with itself in the proper sense.”[6] For Heidegger, stone, the thing, is worldless (Oppen’s “idiot stone”?), the animal is “poor in world,” impoverished of its “open,” while the human is “world-forming”:

More servant than master, I’d wager, which is precisely Uexküll’s point. While the animal is ultimately “open to that for which it is open,” Heidegger claims that it is “captivated” by it’s umwelt in the sense that it is unable to overcome it: “Captivation is withholding of the possibility of the manifestness of beings, a withholding which is essential and not merely an enduring or temporary one.”[8] Humans, on the other hand, who are equipped to abstract from their environments through “attunements” like boredom, are just as captivated by their world(s) — as we all must intuitively know — just as stuck, finally, even with our purported abstraction. For the most part, our “disinhibiting rings” are still conditioned by our desire and its satiation, and in a capitalist milieu, desire can be difficult to control, even if we recognize it. In fact, I would argue that the apparent manifestness of beings from an anthropomorphic perspective is its own form of captivation: human exceptionalism manifest(ing) (as) destiny.

Fortuitously, the poem is an organ of capture — a synthetic umwelt — that disrupts this captivation, bridging distinct milieus by cutting through them. A palimpsest placed atop worlds, the poem builds a bridge or hinge between bubbles, an open by which isolated monads can touch, mutually coevolving while affording the necessary autonomy to steer clear of dialectical sublation. Its capture creates a window of abstraction that fundamentally reconditions the makeup of a solipsistic umwelt without foreclosing on the value of its alterity. In her writing about Uexküll (in relation to Deleuze), Elizabeth Grosz writes, “The frame separates. It cuts into a milieu or space. This cutting links it to the constitution of the plane of composition, to the provisional ordering of chaos through the laying down of a grid or order that entraps chaotic shards, chaoid states, to arrest or slow them into a space and a time, a structure and a form.”[9] However, the poem does so employing a disjunctive synthesis, specifically:

[A]rt is not only the movement of territorialization, the movement of joining the body to the chaos of the universe itself according to the body’s needs and interests; it is also the converse movement, that of deterritorialization, of cutting through territories, breaking up systems of enclosure and performance, traversing territory in order to retouch chaos, enabling something mad, asystematic, something of the chaotic outside to reassert and restore itself in and through the body, through works and events that impact the body. If framing creates the very condition for the plane of composition and thus of any particular works of art, art itself is equally a project that disjars, distends, and transforms frames, that focuses on the intervals and conjunctions between frames.[10]

Because the human environment is never only tactile, this disjarring and distending can result from intellective and affective perception marks as well. As an organ of capture, the poem opens an abyssal forcefield by cutting through umwelts creating a complex overlay of milieus, a synthetic  “territory” that smothers the monolithic open we daydream-towards-death. The poem is its own “soap bubble,” but this one overlaps with others while preserving them. If it’s true that the organism’s complexity is a product of its ability to engage with its umwelt, the poem’s perception marks are manifold enough to equip the reader with an epic organismal coevolution ultimately leveraged by discaptivation.

As a result, the poem doesn’t just expand world(s), it fundamentally undoes them. It offers a different quality of enthrallment, a productive immersion/absorption in potential, growth, and the disentangling of ersatz fabrics of the real. In order to act as noise — a noise that genuinely and productively disrupts capitalist captivation — the perception marks of the poem, ultimately extinguished by effects, put pressure on the load-bearing scaffold of world; however, what’s perhaps most productive about the poem’s capture is the way it coordinates between disparate umwelts: as Deleuzian Anne Sauvagnargues has it, “complex clusters of milieus [...] radiate from living things. These milieus are singular and differentiated but also interconnected, ritornellos of signs that assume an ecological consistency.”[11] Rhizomatic networks of umwelts are ultimately what’s at stake in Deleuze and Guattari’s interest in the complicated relationship between wasp and orchid, a coupling they first discovered in Proust:

Wasp and orchid, as heterogenous elements, form a rhizome [...] not imitation at all but a capture of code, surplus value of code, an increase in valence, a veritable becoming, a becoming-wasp of the orchid and a becoming-orchid of the wasp. Each of these becomings brings about the deterritorialization of one term and the reterritorialization of the other; the two becomings interlink and form relays in a circulation of intensities pushing the deterritorialization ever further. There is neither imitation nor resemblance, only an exploding of two heterogenous series on the line of flight composed by a common rhizome that can no longer be attributed to or subjugated by anything signifying.[12]

Uexküll discusses these heterogenous coevolutions as melodies in a symphony: “formative melodies [that] influence each other mutually [...] the snapdragon’s melody intervenes as a motif in the bumblebee’s melody and vice versa.”[13] And yet, as Sauvagnargues suggests, this “synthesis” is still disjunctive in the sense that “Each capture is at least double since it assembles disparate entities into a becoming that transforms them both without assimilating them.”[14] Deleuze and Guattari call this “a-parallel” evolution — here between orchid and wasp, spider and fly, bumblebee and snapdragon, reader and writer — a “bloc of becoming [...] that captures their codes. The orchid traps an image of the wasp, and the wasp fertilizes the flower. They undergo an evolution that remains disjunctive and does not fuse into a totality, but diverges through a disjunctive synthesis in the form of an ‘asymmetrical bloc.’”[15] As a result, It might be worth thinking of the relationship between writer/reader and reader/writer through the orchid/wasp rhizome. One can think of the poem as “an ongoing provocation to the organism to utilize its randomly emergent qualities maximally. The organism is a provisional response to that provocation.”[16] The spider’s web is a contrapuntal response to the fly — an “emblem or placard” of a territory — as is the poet’s poem: a productively dissonant frame of discaptivation.

3. Jakob von Uexküll, A Foray into the Worlds of Animals and Humans (Minneapolis, MN: University of Minnesota Press, 2010), 44–45.