This time we shall say: ‘Be the dandy of ambiguities. On pain of losing yourself, love only that which overturns your order.’ As for the pig, he wants to put everything definitively in its place, to reduce it to possible profit; he wants everything to be labelled and consumable.

In order to negotiate the philosophically fraught relationship between body and soul, Cicero drew attention to a lost fragment from Aristotle in which the philosopher uses a singularly vile form of torture practiced by Estruscan pirates as an allegory for embodied life. 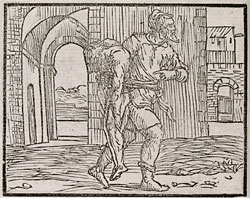 Inspiring the once popular medieval emblem Nupta Contagioso, the viscerally repugnant practice saw living subjects strapped to the diseased deceased in a kind of necrotic matrimony. In his essay on the subject, “The Corpse Bride: Thinking with Nigredo,” Reza Negarestani describes the practice in naseauting, but crucially significant, detail:

A living man or woman was tied to a rotting corpse, face to face, mouth to mouth, limb to limb, with an obsessive exactitude in which each part of the body corresponded with its matching putrefying counterpart. Shackled to their rotting double, the man or woman was left to decay. To avoid the starvation of the victim and to ensure the rotting bonds between the living and the dead were fully established, the Etruscan robbers continued to feed the victim appropriately. Only once the superficial difference between the corpse and the living body started to rot away through the agency of worms, which bridged the two bodies, establishing a differential continuity between them, did the Etruscans stop feeding the living. [2]

While unquestionably revolting, as allegory, the practice perfectly captures the fraught symmetry proposed by the bifurcation of sacred and profane: the body’s telluric finitude, always already being-on-earth-towards-death, and the supposed transcendental perfection of anima mea. However, in our contemporary context — in which genuinely escaping the plane of immanence, however fucked beyond recognition, is inconceivable (even a fanciful philosophical transcendence) — the Nupta Contagioso still speaks volumes about an emergent, zoetic subject, navigating the apparent unitextural becoming of experience apropos world’s coemergence as an instrument of foreclosure, promoting forms of docility meant to capture the subject in a prefab identity formation primed for immediate fungibility. On the one hand, we have the subject figured as a “dynamic spatiality” attempting to “unfold the space that does justice to [its] body”[3] in order to stay ahead of the curve of concrescence by remaining agile and nimble enough to occupy a state of near-perpetual transition. On the other hand, the market democracy presents its rotting partner in the Nupta Contagioso as a waxen, mass-manufactured, readymade aggregate of configurations, a limited set of “market-ready models” pressed mouth-to-mouth with the lithe and living. While the emergent subject attempts to outrace the event horizon in order to keep its head above the rising tide of foreclosure — evolving with world rather than merely folding into it — the market provides a limp inanimate body double with a painted, satisfied expression, meant only to weather the storm of the market’s “soft cretinization,” as Gilles Châtelet has it,  produced by a “techno populism … which happily advertises its carnivorous postmodernity, ready to seek out and digest a best-of selection of the planet’s goods and services.”[4]

In the market, all potential variation can be infolded — captured, displayed, sold, consumed, repeated — to such an extent that escape might ultimately mean consuming one’s doppleganger in order to survive. Ekstasis requires genuine disengagement, but “there is no outside of capitalism,” according to Brian Massumi, “in the sense that, in its tireless displacement of its immanent limit, there is nowhere it cannot go potentially. It is virtually everywhere.”[5] The poet who hopes to occupy the world as it is must accept its terms of service. To do so means to reproduce the very terms that sustain the market’s vampirism, to play by its rules, which is, primarily, to accept those rules. These poems may produce a kind of “beauty,” in-line with classic reception aesthetics: they may attempt to astonish, to produce a sense of the sublime, without, crucially, stepping outside of mere mimesis to genuinely turn toward the world. One will find these poems ultimately complicit, unquestioning, arrestingly didactic. They (re)produce a world and with it the toxic ecology they hope to outrace. In doing so, however, the poet accepts her fungibility, swapping one body for another, reanimating the corpse in order to see the world as it presents itself — living inside it — making its mouth work, lifting its limp hand to point to the beauty out there, hoping all the while that the reader buys the horizonal “equilibrium emerging from the Chaos of teeth and stomachs.”[6]

Refusing to swap subject-configurations for the more readily marketable means surviving the suffocating proximity of the corpse bride and its noxious ambience; however, the poem can help us make a break, operating as an organon of escape if only to render inoperative the subject-configurations most desirable for market exchange. In order to accomplish this task, the poet must not survive the world, but wholly and completely reject it — cracking through the shell of concrescence to search for the still living organisms within. To genuinely “punch a hole in reality,” as Scalapino has it, is to do so from the inside out. One is always already thrown into the world one hopes to effect, so to break the bonds that pin an abeyant subject to its readymade mate might mean stepping into the corpse to destroy it. Gordon Matta-Clark’s sculptural practice, “splitting,” offers an allegorical model to conceptualize this process: in his practice, Matta-Clark and his collaborators took existing, often dilapidated structures and cut through them, allowing for the exterior world to peek through the hidden interior (and vice versa), reconfiguring both the space within and without the structure while changing the fundamental makeup of the thing itself (and subsequently, its value: aesthetic, use, and market). 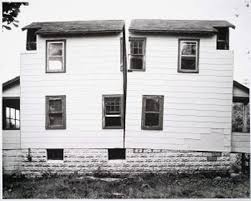 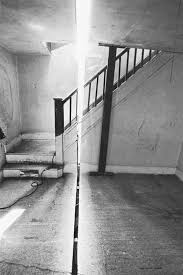 Curator João Ribas, in the catalog for the show “splitting, cutting, writing, drawing, eating …” writes, “the cut/split disintegrated the established sequence of parts that comprised the perceived flat surfaces and enclosed phenomenology of such domestic architecture”; as a result, “the cut reveals the ‘whole’ of this interiority, paradoxically not entirely negating it”; “Splitting the house braided public and private, nature and architecture, into a continuum connected by cuts”[7]. Matta-Clark’s practice disavowed the myth of the whole by pointing to a wholer whole, the world within and without, by taking constituent parts and recasting them as partial objects, material units placed in close enough proximity to shape an ersatz continuum, though one “connected by cuts.” As a result,

For Matta-Clark, cutting was a simple gesture towards complexity, an efficient if brutally lyrical means to ‘make space without building it.’ To cut meant to act beyond a surface limit, engaging, instead, ‘the thin edge,’ or a ‘severed surface,’ in all its psychological, metaphorical and perceptive connotations …

Through cuts, light could enter places ‘it otherwise couldn’t,’ and spaces were now made ‘available to move through that were previously inaccessible.’ This was true in more than merely experiential terms. The confrontational nature of the cut lay precisely in being as ‘brutal physical as it is social.’ ‘By un-doing a building,’ he explained, ‘there are many aspects of the social condition against which I am gesturing. [8]

To “make space without building it” means to stay inside the confines of unitextural becoming, attacking the myth of the whole from within. To “escape” necrotic union with our lifeless doppelgangers means stepping inside the body to rip it open from the inside. The poem, rather than simply reproduce the world, should attempt to fundamentally destroy it (at least in its current configuration). In order to cut ties with the corpse bride, the poem must ritualistically disrupt the settled world to leverage a productive subjective flux, even if, in the end, the first to wake envies all others.[9] 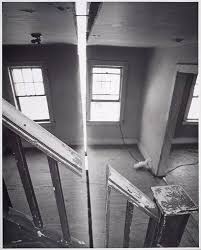 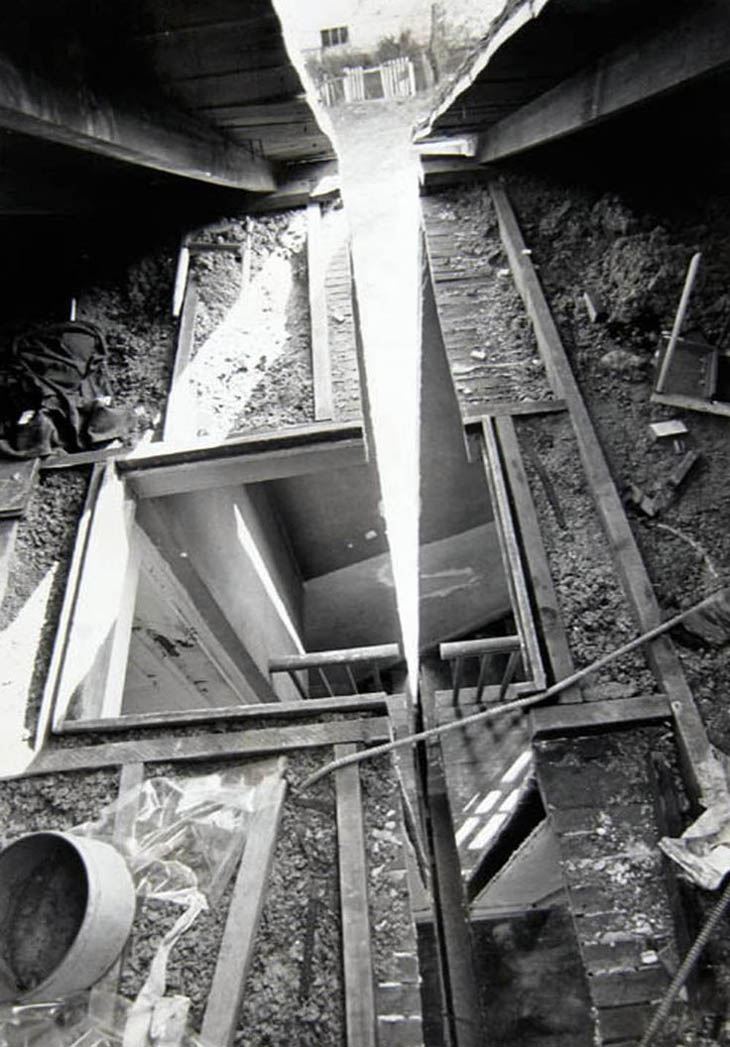