In te ao Māori [the world of the Māori] everything is intensely interrelated, which is why all of these conversations-commentaries keep on interconnecting. So when Alison Wong writes about Pauatahanui, it segues into what I wanted to write next. It was once the home of a poet who is mainstream, but has never been any favourite of this country’s academic mainstream. He is very much planted right in the middle of the nation’s consciousness, yet all too often ignored on the lower floors of its English department ivory towers. Not that he could ever care less about this latter point. After all, as he said to me, “I’ve never been on the side of the bosses.”

Sam Hunt is Aotearoa-New Zealand’s most well-known poet; more of his books cross the sales counter of bookstores than any other. He is a performance poet, a veritable troubadour, minstrel, teller-of-tales unsurpassed and unsurpassable across this skinny country’s poetic carapace. For his is the musical timbre, the rhythmical lilt of his reading to an audience, the rhyme when it matters; his is the interface of song and poem, which after all started as one and the same. For him also, which he acknowledges is generalisation, “the invention of the printing press changed poems — they went away from being songs...” He brings them back together.

In firm mōteatea [song-poetry]tradition, Hunt is oral physicality, where the ears matter as much as the eyes. “Listen to the page,” he says. And you have to listen when Sam tells his work, because that's where the real magic is - no one presents their own work as well as he does. Right now I have an old 331/3 vinyl LP floating on the turntable (yes, these things still exist), listening to a 1971 recording, Beware the Man with Sam Hunt and Mammal, a leading rock group of the time. When he comes up to the microphone it’s waiata [song]. The tone, the pauses, the repetitions. “The verse break matters,” he stresses when recounting how some versions of his poems sent to a publisher recently devoided themselves of such. And yes, he is still pumping the iron of new poetry — the next collection is due out March, 2016. It is titled Salt River Songs.

Sam Hunt could well be part-Māori eh. For almost single handedly he advanced Pākehā into delivery stances similar to Māori performance of ngā mōteatea Māori. Even that Pākehā-Māori Jim Baxter never got so emotionally involved via whole body gyrations and grimaces when delivering his increasingly Maorified lines. I know because I’ve seen both these Cancerians exhaling their own work. For Māori delivery is all. No part of the tinana (body) is allowed to linger.

Sam Hunt should need no introduction to any Kiwi - he was Robert Burn Fellow waaaaay back last century, has a QSM medal, a Companion of the New Zealand Order of Merit and has received several more accolades over the years because he - along perhaps with Baxter, Tuwhare and maybe one or two others at times, is the backbone of the New Zealand peoples' poetic. Take away this spine and we have lots of loose ribs. And thousands of words, words, words waiting to be sung outloud, live. He was, after all, deserved recipient the Prime Ministers Award for Literary Achievement in 2012.

Thank God, then,  for his presence in these days of language legerdemain, post-modern prolixity, institutionalised inculcation into 'learning' how to write poems.  Hunt remains, 'highly suspicious of the academic industry of how to write poems.' I won't quote his exact phrase about academics pertaining to teach how to write poetry, but let you imagine his vehement exclamatory wish to expunge such 'shit.' For Sam, 'a poem either happens or it doesn't...it's borrowed' (which reminds me of what David Howard said in a previous post. Interconnectivity again, eh.) So, again, 'Why talk about a poem? Live it.'

Indeed, Sam Hunt continues, 'What grabs me is the poem, not all the rest...and a lot of Aotearoa poetry these days is crap...[but] there are some good poems and I look out for them. I look forward to that magical voice that comes along every so often...sometimes this happens.' Having toured schools for 50 years - something he no longer does, by the way - he laments, 'some of the damage I've witnessed by teachers 'teaching' poetry to their students is terrible.' Yet, he goes on, 'I'm not anti-academic, but I am versus bad academia.' For Hunt, creative writing courses are anathema and he cannot understand how some people 'manufacture poems...Some people seem to think that poetry is like a tap you can turn on...'

Words for the Poetry Teacher 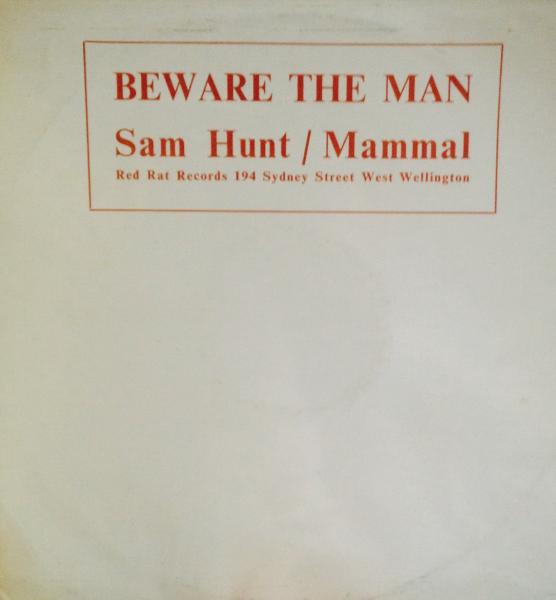 Why ever teach a line

the child has to learn

by heart, before his time?

Better to let it burn.

on sofa, bench or stool,

arms folded, back in school.

Know not a syllable.

that sighs; that knows of pain;

that knows no need of rhyme.

So the child. So the rain.

At 69 - but sounding thirty years younger to me - Sam performs less these days. 'I'm not touring as much, not on the road as much...I want to be on the Kaipara, where I have been 14 years...everything in my life goes in 7 year cycles.' He prefers to reside, 'five gunshots from humanity...[you] become a Cistercian nun in the end,' he jokes seriously. It is, however vital to note, that Sam Hunt is still recording LPs with a rock group - the Heavy 8's - and that he has been on the road in more limited fashion lately, performing tracks from their two recent albums - Falling Debris and The 9th. Interestingly enough, such tracks have been heavily downloaded in Mexico, Chile, Peru...

He regales me with a tale about reciting an e.e. cummings poem to a primary schoolteacher nun named Sister Mary Bernadine, when he was aged 7 - 'he was born to be a poet.' He was also strapped at age 14 for telling a Baxter poem in class. Then - as we talk - he also breaks into a full recitation of a Thom Gunn poem (My Sad Captains) - it's like these lines swim his bloodstream. Did I mention that he quoted the entire cummings poem too? And that he does recognise some 'good' academia, for the article about Gunn 'is superb' - there are some good critiques of poetry now and again.

He mentions Alistair Te Ariki Campbell, another Cancerian - 'I miss him a lot.' Some other poets have emboiled themselves into his DNA spirals. Hunt likes Bob Dylan - but, as he points out, as regards any poet's oeuvre - 'don't ask if something is going to last..."the function of posterity is to look after itself," as he quotes another Dylan (Thomas.) The poem is the thing, rather than any historical overlay: 'I'm not in the school interested in poetry as a subject; they can go and get...'[I'll let you guess the expletive here.]  Such analysis diminishes the poem itself, on the page as needing to be listened to as much as read. As noted above, a reader of poetry requires 'an ear for the sound of the words.'

He knows his poets, his favourite poems, his poetic forms probably better than the back of his own hand; he also realises a need to have a metaphor here and there. He even breaks down the syllabification of certain poetic forms into the number of such in a line, for me. Sam Hunt lives poetry, exudes it through his every pore 24/7.

So the BIG question has to be stated - why has he not been/is he not Aotearoa-New Zealand's Poet Laureate? Hunt is no still-living fossil but the complete corporeal embodiment of what a poet IS. I personally am buggered if I know any answer to my own question...let's refer instead to one percipient early critic of Hunt, the late Peter Smart, who wrote back in 1981, 'The purpose of this book [Introducing Sam Hunt] is to suggest that it would be a mistake to dismiss Sam Hunt's poetry too lightly...I believe that his best poems do repay study; they are subtle, layered works of art which can grow on an attentive reader to give maturing pleasure.' I can only completely concur, eh. If you glance back at Words for the Poetry Teacher, there are all sorts of neat nuances - the subtle assonances, intermittent and internal rhymes, repetitions, the deliberate near misses of line/learn; still/stool; pine/pain; rhyme/rain. In his KISS - keep it simple stupid - approach to the craft of creating/being the fount of poetry, he is actually quite cleverly complex. As here - in a new previously unpublished poem -

Chord (1)
I was carrying up the stairs

a knife in a sheath,
a bottle of wine, and two logs.
Just thought I’d
make a note of it.
You know, these days
you can’t be too careful:
good to take note
and be a bit fearful.

And in seventy years, say,
when I’m well up in heaven,
a grandkid could be asking - again -
what was he carrying?
And you’ll be able
to tell them the tale
to do with firewood,
a knife in a sheath,
a bottle of wine
the colour of blood.

When you make the mark,

when it’s time to start dying,

time to check out the dark -

a time to check real estate,

land in the land of the dead;

past the barricaded gate -

When you hit the mark.

Or hit the wall.

And don’t worry yourself,

you won’t be forgotten,

you won’t miss your turn

to lie flat on your back,

be carried by six

friends if you have them

in an oblong wooden box

to the top of the bluff;

be laid to rest -

Brief autobiographical note: Over the last 35 years or so, I have had irregular contact with Sam and he has been to my homes in Picton and Te Araroa. There is no need for any regular correspondence - it's the Cancerian thing, I reckon. I mentioned Colin Wilson - author of the seminal The Outsider (1956) to him because in many ways Sam is an outsider - he has more than one persona and a profound part of him shies/shys away from too much personal contact. Yes, there is the public man, but I know also there is a quiet, domestic, private man too and this is often a source of conflict for the Cancerian male - like Wilson himself, Baxter, Campbell - and certainly me. Too bloody sensitive I reckon - and prone to a Romanticism that gets us into trouble with women, authority figures and dickheads in general.

Here is Sam's own website, full of all sorts of interesting stuff, including more poems.

This is the New Zealand Book Council material on Sam.

A sample of a recent recitation from You Tube...