Guide me to his classroom

In 1967 Mark Van Doren recorded his poems for the Smithsonian Folkways archive (founded in 1948 and led for many years by the remarkable Moses Asch). Mark's son Charles gave me a copy of the CD version of this recording and we at PENNsound had it made into downloadable mp3's, which you can get here on PENNsound. I especially recommend that you listen to the final poem, "When the World Ends."

Mark Van Doren was a legend at Columbia University and around much of Manhattan. Dan Wakefield, when he wrote his memoir of the 1950s, remembered encountering an urbane yet at bottom quite radical essay, an essay that made the young man feel "a quiet excitement of the kind that comes when you discover something ... that speaks directly to you, that seems to be a response to questions you didn't even know you were asking until the answers appeared with such clarity and power, as if they were waiting for you all the time." The author of the essay was Mark Van Doren, "identified as a Pulitzer Prize-winning poet who was also a professor of English at Columbia."

"Mark Van Doren," Wakefield continues to remember. "His name seemed to rise up off the page like an Indian smoke signal of the intellect or a Jack Armstrong secret code from the unconscious to guide me to his classroom. I knew without further explanation that somehow I was going to go to Columbia to study with Mark Van Doren."

Leaving hyperbole aside — there must be some of it here — I find in my large Van Doren file a dozen similar encomia. Van Doren was a magnet.

A few years ago I read The Autobiography of Mark Van Doren (Greeenwood, 1968) and was much moved by his beautiful evocation of his beloved farmhouse (which he built with his famous brother Carl) in rural Connecticut — and the sense of the shuttle between Bleecker Street, teaching classes, returning to "the country," summering, sabbaticalizing, writing belle lettristic critical books and introductions, and poetry. I can't say the latter speaks much to me, not often anyway (although I am always of open mind reading it), but the figure, the position, the intellectual passion, the style of life ... has always been an allure. 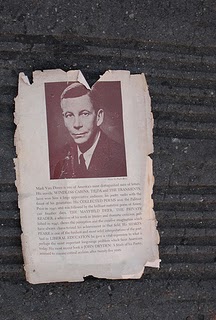 When the 100th anniversary of Whitman's Leaves of Grass was celebrated in Washington in 1955, it was Mark Van Doren who was asked to speak (among just a few others).

He contribued to the upstart Chicago Review in the late 40s and early 50s — quite a reaching-out from such an eminence.

He was the son of Charles Lucius Van Doren, a country doctor in Hope, Illinois. (Thus not, most definitely not, a descendent of priveleged Dutch-stock Yankee/New Yorkers as some people think.)

He was on the liberal-left during the McCarthy period, and there's no mistake about that. At NYU's Tamiment Library one can look through the archives of "Counterattack," one of the anticommunist red-baiting "research" groups. They would gather damning info and materials and clippings about the supposed communist activities of people — actors, intellectuals, writers — and sell the info to others who could smear, blacklist, etc. Well, Mark Van Doren has a sizable file in the Counterattack papers. Here's an example: "Mark Van Doren was listed as a sponsor of the Children's Unity Festival, which was sponsored by the CITIZEN'S COMMITTEE OF THE UPPER WEST SIDE. This festival took place in approximately 1945. This COMMITTEE was cited as a subversive organization in New York City which is among the affiliates and committees of the Community Party, USA, by Attorney General Tom Clark in December 1947 ... Mark Van Doren ... was listed as a host to a dinner honoring the Spanish Government-in-Exile [this was during Franco's Spain!], to be held in the Grand Ballroom of the Hotel Roosevelt, November 26, 1946 ... According to the DAILY WORKER of December 10, 1947 a "Free the Movies" rally was held in Manhattan Center. Speakers at this meeting included MARK VAN DOREN." And so on. It goes on for 8 pages like this.

(Ah, if only there were a Citizens Committee of the Upper West Side today running children's unity festivals.)

And Eugene Lyons, in The Red Decade, a book that listed communist intellectuals and was a bible for red-baiters for 15 years, lists Mark Van Doren (p. 318). Being a Red Decade Red meant some serious smearing, boycotting, letters of complaint, concern if not fear among publishers, etc.

He was Old School, but he was sane and would not tolerate idiocy of the Counterattack sort, and, by all accounts, he was an alluring important teacher and devoted mentor. 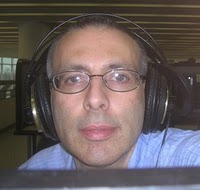 Ben Friedlander, the poet, critic and editor, will not be attending the 30th reunion of his Bronx Science High School class this year. He's not the reunion type. So here, in lieu of that, is his high-school-memory offering, a response to the above entry:

The first assignment in my AP English class (at Bronx Science) was to write an "explication du texte" of Robert Hayden's "A Ballad of Remembrance," which concludes with a loving apostrophe to Mark Van Doren, as I'm sure you recall. So researching who this "Mark Van Doren" was, was my first act as a literary scholar! Not that I learned much of anything about him. In those days before Google, my only real option was to call the reference desk at the New York Public Library, and the person who answered the phone had him confused with the quiz show Van Doren. My paper was a bit of a mess.