The image here (click on it for a better view) is cropped from an AP news story that was given the title "Is e-mail ruining the way we write?" It was published widely in papers that take stories from the Associated Press on and around December 12, 2005. Here's a link to the whole story.

Perhaps a dozen times in the past four years I've been asked by radio shows (among them Day to Day and a live talk-radio show in Seattle) and print journalists (including the AP reporter who wrote the story above) to talk about why and how email and other digital writing forms (they especially want me to talk about IM) have ruined writing and reading for the new generations. The line is always a version of: the IM'ing, texting, blogging teen (or twenty-something) is a barbarian at the gates of good grammar and thus of culture.

They never assume that I might disagree with the premise. I tell them that they really don't want to talk to me because it's my view that writing has improved since the rise of electronic mail and since typing at our keyboards, of all sizes (even the tiniest), has become one of the two or three activities we do most often daily. For most people, let us say in the year 1945, writing would not have been in the top 15. Whereas one's writing can improve (and I'd say most often improves) when one writes — the best way, when all is said, to become a better writer is to write — and whereas we are all writing so much and so much of our communication with each other is through typewritten language, there's more writing, more improvement when the quick response to your writing indicates that you were confusing, more effort being made to say what one means, etc. I didn't say success; I said effort. Failed efforts receive doubtful responses fast. 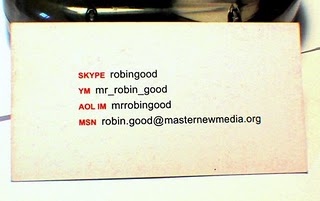 The easy worry and complaint (shared by many journalists looking for the story they know is out there) is that the shorthand of adolescent IM'ers, which leads infamously to shortcut spellings, will erode proper writing to the point where it's unconscious, sloppy, bad communication. (These stories are the descendent and distant cousin of all the juvenile delinquent stories from the late 1950s.) Well, I say: on the contrary. If you can get past the shortcut "mis-spellings" and the rat-ta-tat style of back-and-forth, you can see writers in the making through a constantly repeated practice, a practice that is associated with the most vital part of the way we live. When else was writing deemed by young people to be so close to the heart of living? There's great promise here, I think. (And a more important role, than ever, for teachers of writing to take some advantage of this sense of necessity.) My kids (13 and 16) are super-conscious of writing as the main way they communicate complex thoughts. They talk about it all the time. Yes, folks, picture it: teenagers, sleepily over breakfast, talking about writing. When I was their age, I found writing to be a struggle - and I was relatively good at it, and once I got going my sentences gained a certain flair; I knew how much harder it was for some of my friends who didn't, until perhaps much later, find any such flair and who perhaps only thought about writing when at our relatively mediocre public high school, in English class being "taught" the 5-paragraph essay (the one "form" I was taught, other than haiku or sonnet I suppose, in 12 or 13 years of pre-college schooling). I just didn't do it as much as I should have in order to find comfort. And sitting down at a blank page on my Smith Corona was always at first a frightening prospect. Writing letters by hand was even more frightening.

The folks who want an English professor to comment on this expect me to whinge and express fear of writing's demise. Instead I express excitement and hope about the immediate future of writing.

The above-mentioned Day to Day decided not to have me on as a guest. I told a very nice editor there of my view and said that I was not especially interested in talking about how all this might effect students' results on the new writing SAT, and they realized I was the wrong guy for them.

Many reading this entry will disagree. The conversation we'll have about it will be written and I'll bet that the writing will be interesting. Write me at afilreis [at] writing [dot] upenn [dot] edu. 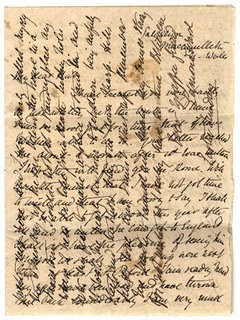 A faithful reader of your daily Al, Jean-Marie Kneeley, responds (in part) as follows:

On the one hand, you're absolutely right — people are writing more and that IS a good thing. On the other hand, I think email encourages people to write carelessly and thoughtlessly — I see this all the time at work — and that is decidedly NOT a good thing. I was trained to think/write on a keyboard (my journalistic background) and I do find writing on a computer infinitely better that my old Smith-Corona (remember correcto-type!). But I mourn the loss of handwritten letters sent through the USPS. How I wish I saved all my letters from my college years, especially from my first love (who I almost married)! And one thing that you can do in a letter that you can't do in email, slip a few bucks into the envelope. My Mom used to do that every now and again back when five dollars was a princely sum! In the end, I do agree that any writing is better than less writing. And email does allow you to share thoughts that you might not have otherwise bothered with. (Bad sentence structure there!) Much like this one.

So much to say in counter-response, but I'll restrain myself and point out a few reasons why I especially like this. First, it is doubtful that the exchange between JM and me could have happened in letters — and that's not to mention that you (others reading this now) would ever get to benefit from it. Second, JM's sentence, the one she thinks is "bad" and ends with a preposition, is something she wrote quickly, on the fly, at her desk at work, on a Thursday morning, and it does say what she wanted to say, however incorrect in a technical customary sense. I'm glad to have it just as it is, because it enabled her self-referential comment, wittily: "Much like this one." It's not "free writing" (I don't think I believe in such a thing) but its freer. Some of the most exciting writing I've read in my life — and long before the advent of electronic mail - has been or seemed composed "carelessly and thoughtlessly." Writers whose writing ranges as widely as that of Kerouac, Thoreau, Jackson Mac Low, Laurence Sterne, T. E. Hulme (via visual thinking), Jack Spicer (let thought come from somewhere else), and Wordsworth (through memory & thus not being quite here) all contended in one way or another that emptying out thought, going thoughtless — and then writing in such a state — might produce something true.

For the record: I'm not devaluing the handwritten letter sent through the US mail. It's just that the economy of written media is larger than it was, and the subgenres - under the capacious rubic, "letters" or "messages" — have multiplied.