Don Hall has always written poems — and more recently prose too — about death (human mortality and nature's stasis are his two [related] major concerns), and so naturally we talked a lot about death while he was with us. I and my students were stunned by how easily and articulately he talks about death — others' (his father's, his grandfather's and of course his wife's) and his own.

Readers looking for the best Hall on death will read Without, which includes a somewhat by-now famous series of poems about the illness of death of Hall's beloved poet-wife Jane Kenyon. And later, stuff like:

When you died
in April, baseball took up
its cadences again
under the indoor ballpark's
patched and recovered ceiling.
You would have admired
the Mariners, still hanging on
in October, like blue asters
surviving frost.

This is subtler than one might at first think, referring as it does to the beautiful and also horribly displaced time Jane and Don spent in Seattle while they awaited and she then received a bone-marrow transplant. They both loved baseball and presumably spent some time in the hospital room watching the Mariners, the local time. Hanging on in October is a deep phrase, and not just about nature and not just about baseball.

But his best poem about death is not in Without. It's "Deathwork" and was collected recently in Hall's definitive collected poems, White Apples and the Taste of Stone. "Deathwork" is linguistically one of Hall's most experimental poems and it's also a depressed/angry rejoinder to his own Lifework, a lovely book of prose about his total happy addiction to work, his kind of work (writing and having a daily domestic sequencing of events around that work, which includes writings letters, watching baseball, reading the newspaper, walking the dog, tending the garden, cooking dinner, etc.). When all that seems to be gone, he second-guesses that old pleasure, removes the subject from every sentence, and makes a list poem that consists of a series of grammatical imperatives. "Drag out afternoon. / Walk dog. Don't write. / Turn off light. / Smoke cigarette / Watching sun set. / Wait for the fucking moon." Then, lest any romance and poetry creep back in, the next line: "Nuke lasagna."

Other poems from White Apples and the Taste of Stone I recommend:

"Dread" — his father can't even admit to himself that he is dying of cancer fast, and is embarrassed by the rare affectionate kiss his son gives him on returning home after the early news of the illness

all the Kearsarge poems — the mountain he can see every day (or knows is there behind mists) behind his ancestral home; it looms and reminds him that it will stay and he will go; by the later poems he is angry at Kearsarge and rages at it

"Stone Walls" — Kearsarge again but in the context of what the Nixonian U.S. is doing to Allende in Chile; why have I retreated to New Hampshire and what relevance does it have?

"Witness's House" — my favorite of the Hall family poems, about his grandmother who is engaged in her own kind of lifework and passes that on to him, the poet, a clearer sense of the custom and reason for the day's efforts than does his grandfather who is more obviously beloved and seems to have had a clearer influence

two long baseball poems, "Baseball" and "Extra Innings" — using the formalistic grid of baseball (each poem is nine sections each consisting of nine sections) he permits himself - unusual for him - to wander off into thoughts about art, the history of modernism, etc 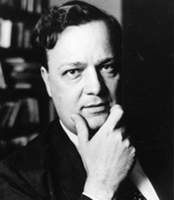 Don Hall is now fairly open as to his support of poets and differing poetics. In the late 50s and early 60s, however, he was not nearly as receptive to the New American Poetry. To me the key text on this point is "Ah, Love, Let us Be True: Domesticity and History in Contemporary Poetry," written for a special issue of The American Scholar on poetry in (I think) 1962. "Conformity," Hall wrote, "is social and public and protective; domesticity for the poet has uses that inhibit his extension as an artist ... If a man writes a love poem to his wife, it is childish to complain that he is conforming to a bourgeois institution." On Richard Wilbur: "He seems representative of an increasing impatience, among poets, with subjectivism as a contemporary alternative. It seems played out." And: "When Eliot and Pound were our age, they wrote out of a sense of history which no one now seems to possess." And: "Surely Kenneth Fearing is excellently subversive and yet unreadable because of the frailty of his imagination ... It is not, of course, necessary to see two sides of a one-sided coin ('Does Lynching Have a Silver Lining?'), but a poem that entirely represents the world that it hates, and excludes representation of the world of poetry and the imagination that it loves, ultimately fails."

In 1956, in a review published in The New England Quarterly: "Elizabeth Bishop is the only well-known contemporary poet to begin publishing in the last twenty years who has written well in free forms."

Here is a podcast version of this entry. 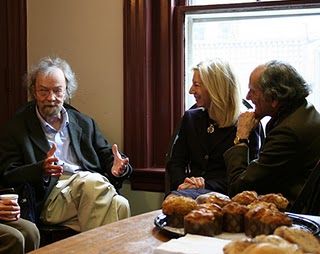 Above, from left to right: Donald Hall, Amy Gutmann (president of the University of Pennsylvania) and Dan Hoffman (poet and former chair of the Creative Writing Program at Penn), just prior to my interview/conversation with Don in April 2007.