An Anthology of Anthologies

Poetry anthologies have always been a controversial topic in Chile. Intended to present the most representative of a certain group or generation of writers, or to highlight the most interesting or groundbreaking work from a particular aesthetic, and expected with enthusiasm and curiosity by readers, critics, and scholars, there is always some room for arduous debate and polemic discussion every time a new anthology is released. The most emblematic case took place in 1935, when Eduardo Anguita and Volodia Teiltelboim, two young poets and perfect strangers to Chilean poetry at the time, published Antología de la poesía chilena nueva (Anthology of the New Chilean Poetry), in which they had the audacity to include themselves while leaving Gabriela Mistral out. Completely destroyed by the critics of that time, the collection is now considered a key anthology in the history of Chilean poetry. But there are other anthologies that, maybe because they are intended to be distributed outside the country, don’t get the same attention and resonance but still are crucial in promoting and spreading the work of different Chilean poets abroad, especially considering that many of the writers included don’t have full-length books translated into another language. Bilingual anthologies then are important means and great opportunities to make the work of interesting poets known in countries where Spanish is not the main language.

Find below a brief description of some of the anthologies of Chilean Poetry that are possible to find in English.

A longstanding supporter of Chilean poetry, professor, publisher, poet, and translator Dave Oliphant prepared an anthology of twenty-two Chilean poets for the Wisconsin magazine Road Apple Review. Oliphant had spent some time in Chile during the ’60s, where he had the chance to meet Nicanor Parra. After this special issue, Oliphant translated two full-length collections of translation from the Spanish. Figures of Speech by Enrique Lihn was published in 1999, and After-Dinner Declarations by Nicanor Parra in 2001. Apparently, there is no trace of Road Apple Review online but maybe this reference could help to locate the magazine in a library: Road Apple Review 4, no.1 (1972), Oshkosh, University of Wisconsin. Special issue of contemporary Chilean poetry.

Selected and translated by Steven F. White (Greensboro: Unicorn Press, 1986), this anthology includes a group of twenty-two poets (Teresa Calderón, Juan Cameron, Aristóteles España, Oscar Hahn, Omar Lara, Diego Maquieira, Juan Luis Martínez, Gonzalo Millán, Clemente Riedemann, Manuel Silva Acevedo, Armando Rubio, Rodrigo Lira, and Raúl Zurita, among them). The translator worked on this collection in Chile during the turbulent 1983, a year of great hope, according to White himself, but also a year of great violence and political turmoil. It includes a partial representation of two generations of poets who were active during the dictatorship. You can find the introduction by Juan Armando Epple and the translator’s preface here, and some excerpts here. Available at Amazon.

Edited by Cecilia Vicuña, translated by John Bierhorst, and published by Latin American Literary Review Press and Americas Society, Ul is a collection of work by contemporary mapuche poets Elicura Chihuailaf, Leonel Lienlaf, Jaime Luis Huenún (a poet who was already translated by Daniel Borzutzky for Action Books), and Graciela Huinao. A trilingual anthology (the poems appear in Mapudungun, Spanish, and English) the book includes notes, a glossary, and an introduction by Cecilia Vicuña. Available at SPD. 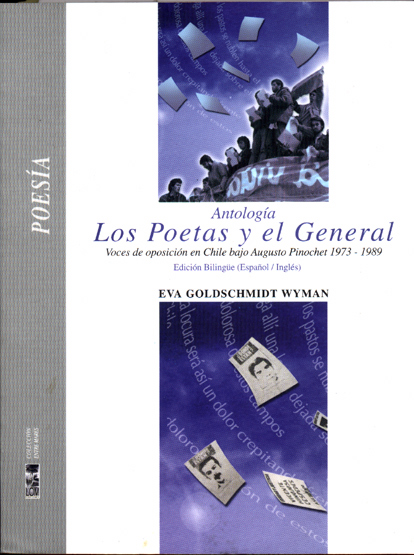 Available by its name in Spanish, Los Poetas y el General: Voces de oposición en Chile bajo Augusto Pinchet 1973–1989, this anthology was published in 2002 by Lom Ediciones in Chile and edited by Eva Goldschmidt Wyman in collaboration with Magdalena Fuentes Zurita and Victoria Frenkel Harris. As the title suggests, this is a thematic collection. Including the work from poets of the so-called “Generación de los ’80,” the purpose of this anthology is “to keep memory alive and never forget.” The poems describe exactly what happened immediately after the coup: prison, torture, and exile. Many of the poems are meditations about what it means to be “free” under a dictatorial regime. It is organized according to where the poems were written, so some sections take the name of different detention centers and concentration camps established during the first years of the regime (Dawson Island, Chacabuco Prison, and Chile Stadium, the place were Víctor Jara was killed; indeed, the anthology includes a couple of poems by Jara himself). Some of the poets included: Armando Uribe, Raúl Zurita, Heddy Navarro, Gonzalo Millán, Floridor Pérez, Efraín Barquero, Alfonso Alcalde, Roberto Bolaño, Teresa Calderón, José Angel Cuevas, Tomás Harris, and Ariel Dorfman, among others. You can find some excerpts here. 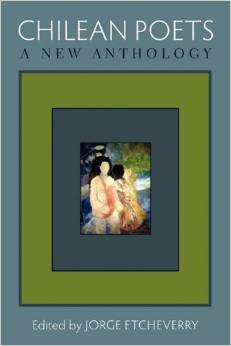 Edited by Jorge Etcheverry (Chilean poet, translator, literary critic, and publisher living in Ottawa), translated by different translators, and published by Marick Press in 2011, this includes the “big four” of Chilean poetry (Neruda, Mistral, de Rokha, and Huidobro) plus Nicanor Parra, and an interesting sample of the following and younger generations from whom it is possible to find different aesthetics and diverse thematic interests. Among the selected poets are Armando Uribe, Armando Roa, Gonzalo Rojas, Rodrigo Lira, José Angel Cuevas, Sergio Badilla Castillo, and others. Also available at SPD. 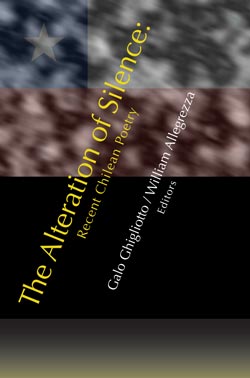 Another trilingual anthology (Mapudungún, Spanish, and English), this time from Australia. Edited by Mapuche poet Jaime Luis Huenún and published by Interactive Press, this collection includes work by the poets Bernardo Colipan, Maribel Mora Curriao, Paulo Huirimilla, and Roxana Miranda Rupailaf. Translations by Mapuche and Chileans meet the translations of Chileans and Australians on the other side of the Pacific Ocean. Includes also illustrative introductory essays by Mapuche and Chilean scholars. Available at Amazon.

Finally, I have received news that Cardboard House Press, a bilingual publishing house dedicated to editorial production through community development processes, is actually working on a new anthology of Chilean poetry. Cardboard House Press, an independent press from Bloomington, Indiana, has already published an anthology of Peruvian poetry titled Asymmetries, which was launched during October 2014 in New York and Philadelphia. For more information, visit their official website.