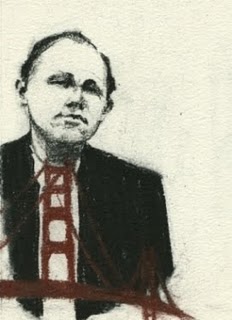 Julia Bloch, CA Conrad, and Rachel Blau DuPlessis joined Al Filreis to talk about Jack Spicer’s early poem of 1949, “Psychoanalysis: An Elegy.” Sections of the poem are framed by what is either meant to be an unironic prompt or a satirized annoyance: What are you thinking about? - What are you thinking? – What are you thinking now? The speaker is the analysand and the poem is the means by which the analysand talks his way through to the poem. Is his major concern – the supposed problem for which the poem is a talking cure – that the poem “could go on forever”? The sexual longing, the pain and the dislocation of the California summer are all – together – topics “I would like to write a poem” about. Increasingly annoyed by the sameness of the analyst’s refrain (“Do you get me, Doctor?”), he pushes his sexual conceits to a hottest point, when summers are seen to “torture California,” when “the damned maps burn” and the “mad cartographer” (whom the PoemTalkers agree is the speaker himself)

Falls to the ground and possesses
The sweet thick earth from which he has been hiding.

What he has been hiding? The significance of his homosexuality? And why, by the way, might California in 1949 be just the spot, as it were, on the geohistorical map for the psychoanalytic mode of talking about what one is hiding about oneself? We explore a range of possible answers to that question, including biographical and ideological. Julia and Al note in particular that this was the time of anticommunist investigations into “disloyal” faculty teaching in the University of California system, especially at Berkeley – that jobs, but also identities (including secret identities) were at risk. (Spicer was among those who refused to sign the loyalty oath imposed on faculty by the state government.) Whereupon Conrad observes that the witch-hunts almost inexorably targeted gays both open and closeted. Rachel concludes with a cogent interpretation of the gendering in the poem and of the sexual hiding. What remains wide open is the question of whether, in the end, this poem says mockingly and happily goodbye to psychoanalysis as a mode of self-understanding, or affirms analysis as having done its job for the poet in particular. Does the realization that “a poem could go on forever” seem to affirm the talking-through process, the topical wandering, the going wherever thought goes? Or does that just add to the torture of this endless summer? Both, it would seem.