George Oppen’s poetry first caught the eye of Charles Tomlinson when he singled out The Materials from a number of books that had been sent to him for review. It was a momentous discovery, leading to a prompt exchange of letters and their first meeting, followed by a steadily deepening friendship that lasted until Oppen’s death in 1984. Over time and space — the physical distance separating Tomlinson’s Brook Cottage in Gloucestershire from Oppen’s Brooklyn, and later San Francisco — the sense of what united them as poets grew ever stronger. For Tomlinson, escaping British insularity, it had been American poetry exemplified by Marianne Moore and Wallace Stevens, then above all by William Carlos Williams, which had brought a liberating force of clean-cut exactness to his own work. Therefore the impact of a writer in the same invigorating tradition, though this time an Objectivist of the 1930s publishing again after a silence of twenty-eight years, was the basis for an increasing admiration that continued with the appearance of Oppen’s subsequent collections, This in Which (1965), Of Being Numerous (1968), and Seascape: Needle’s Eye (1972). As we see in the letters, it was an admiration returned by Oppen for Tomlinson’s own books — The Necklace (1955, 1966), Seeing Is Believing (1958, 1960), A Peopled Landscape (1963), American Scenes (1966), The Way of a World (1969), Written on Water (1972), and The Way In (1974). But, as the letters also show, Oppen was struck in turn, and from his American standpoint, by the native rootedness which he saw being defended in Tomlinson’s distinctly English verse. Just as Charles Reznikoff’s lines about “a girder / still itself among the rubbish,” would remain for Oppen a talisman of special constancy, so words from A Peopled Landscape, “Our language is our land,” resonate throughout his letters as a mark of all that came to be shared by two remarkable poets in a conversation across the years. 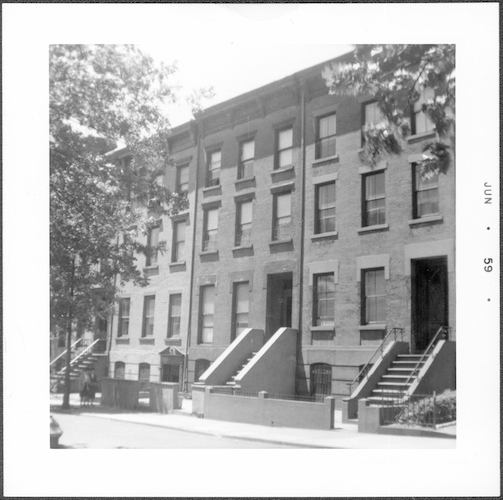 Henry Street, Brooklyn. The entrance to 364 is at the extreme left, by the steps with railings (photo courtesy of Brooklyn Historical Society).

Note on the text: Addresses, names, and dates have been regularized, but Oppen’s irregular style of paragraphing at certain points has been retained, as well as his spacing and split dashes (- -). All Tomlinson’s letters were handwritten, and all by Oppen were typed, except for letters 73 and 77. Explanatory footnotes, when given, immediately follow individual letters. Letters 4, 12, 23, 35, 65 and 75 previously appeared in The Selected Letters of George Oppen, ed. Rachel Blau DuPlessis (Durham: Duke University Press, 1990), though letter 75 is dated here January 24, 1972, not 1971, as in The Selected Letters. © 2014 Charles Tomlinson and Linda Oppen.

Richard Swigg has curated a large collection of letters written between 1963 and 1981 between George Oppen and Charles Tomlinson. Just as Charles Reznikoff’s lines about “a girder / still itself among the rubbish” would remain for Oppen a talisman of special constancy, so words from A Peopled Landscape, “Our language is our land,” resonate throughout his letters as a mark of all that came to be shared by two remarkable poets in a conversation across the years.

Charles Tomlinson, CBE, died  August 22, 2015, at the age of eighty-eight. You can read Richard Swigg’s memorial for Tomlinson — along with notes from The Guardian and the University of Bristol (where Tomlinson taught for many years) — on PennSound Daily. Also on PennSound you’ll find our Charles Tomlinson author page, curated by Swigg, which contains hundreds of recordings made over five decades.