Poetry in the streets

In December, I spent a vibrant night at the Cooperifa spoken word salon on the South Side periphery of São Paulo. The open-mic sessions take place every Wednesday at the bar of Zé Batidão, a neighborhood gathering spot in Jardim Guarujá, where up to 300 people of all ages converge weekly to listen to and perform poems. Over the last eleven years, Cooperifa (the name is a compound of cooperativa and periferia) has become well-known in São Paulo and throughout Brazil for uniting and strengthening, through poetry, a community that is marginalized in both social and geographic senses. Sérgio Vaz, a poet and founder of Cooperifa, is widely recognized as a community leader; in 2009, Época magazine named him one of the hundred most influential people in Brazil. Indeed, Cooperifa spoken word is something of a popular movement that has spread beyond São Paulo. 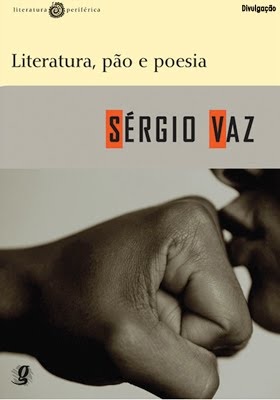 I experienced the sense of this movement a week ago in downtown Rio at the release party for Vaz's most recent book, a collection of crônicas called Literatura, Pão e Poesia (Global, 2011). (The crônica is a genre particular to Portuguese-language literature. Often appearing as a newspaper column, it is a short personal essay or story, usually with a social and/or literary theme. According to Sophia Beal, crônicas are "frequently casual and humorous, often written in the first person and focused on contemporary, urban subject matter.") After signing copies of the book, in lieu of reading, Vaz exited the tiny Folha Seca bookstore to join the crowd gathered in the street outside. There the reading began, as people in the crowd took the spotlight. Many of them performed from Colecionador de Pedras, the anthology of Cooperifa poetry organized by Vaz, and I was told they were reading their own poems. Vaz eventually performed a few of his poems, his body almost boxing as he spoke. The photo at top is from the reading; Vaz is on the far right, wearing a gray Cooperifa t-shirt.

Cooperifa is deserving of another post, but what I want to share now is a video from the December 14 salon, the last in a year of celebration for Cooperifa's 10th anniversary. (Just this month, on February 10, Cooperifa turned 11). At the end of the grand evening of spoken word came a surprise: São Paulo samba school Imperatriz do Samba (Empress of Samba) arrived to unveil its 2012 Carnaval theme, "Sérgio Vaz, O Poeta da Periferia" (Sérgio Vaz, Poet of the Periphery). The drumming started, tables in the bar were quickly stacked away, and we were treated to a preview of Imperatriz's samba enredo, complete with music, costumes, and dancing. In honor of Vaz, the samba tells the story of poetry in its many incarnations. In the video below, look for a female dancer in gold, representing classical poetry, a winged male dancer dressed in red and newspaper who represents the poetry of the street, and good old "Poesia" in purple. Besides the samba school, you'll see Cooperifa folks, including the grandmothers of Cooperifa, who, after throwing it down on the open mic, sambaed all night. Packed dancing with several hundred people, I did my best with the video. Bom Carnaval!

Imperatriz do Samba performed yesterday at Carnaval in Taboão da Serra, Greater São Paulo, although according to this news article from Friday, the region's official Carnaval parade was cancelled. (The article doesn't say why.) Imperatriz decided to parade nonetheless, with everything but the floats.