This is Part II of a four-part essay that appears in Portuguese in Deslocamentos Críticos (Lisbon: Babel; São Paulo, Itaú Cultural, 2011) under the title "Obra Sonora Poética: 1980-2010." Read Part I here.

Ferreira Gullar’s major poetic work has an interesting sonic history. Gullar spent much of the 1970s in exile (1971-77) from Brazil and its dictatorship. While living in Buenos Aires, he wrote the long poem, Poema Sujo, from May to October of 1975. In order to get the poem to Brazil without attracting the attention of the dictatorship, Gullar recorded it on a cassette, which his friend Vinicius de Moraes carried back. In Rio de Janeiro, Vinicius and others held house gatherings to play the recording and share the poem, which was eventually transcribed and published in 1976. It was an early moment in Brazil when new audio technology became a means of disseminating poetry. And in a time of violent repression, it also became a medium for poetry’s potential to give people a sense of freedom through art and communal solidarity.

In her essay, “Rhyme and Freedom” (2009), Susan Stewart argues for another of sound’s liberatory potentials: the attainment of artistic freedom through the use of rhyme and lyric sound in the making of a poem. Contemplating the writing process, she observes that sound, suggestive as it is of speech and bodily rhythm, gives life to writing; a poet’s choices, including those of sound, make the artistic process “resonant” (30). “Artistic freedom reaches its apogee when intention approaches the rich cognitive moment on the brink of realized structure,” Stewart writes (30). As a choice made in creative contact with historical structures and the liveliness of language, the use of rhyme releases the poet to explore language from the inside, playing with language as poetic material through the materiality of sound. Against the modernist legacy of rhyme as “a purely formal device and a kind of restraint,” Stewart offers the idea that “rhyme, along with other intelligible repetitions of sound” frees the artist to innovate with language (29). 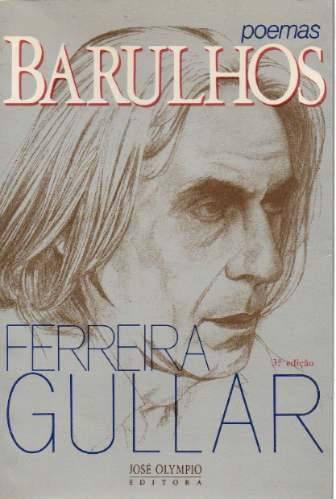 Stewart’s suggestion of the intimate connection between rhyme, freedom, and, finally, memory is useful for understanding the importance of sound in Gullar’s poetry of the 1980s and 90s. Barulhos, spanning work from 1980 to 1987, and the subsequent Muitas Vozes (1999) are devoted to personal lyric verse. Although these books diverge from the overtly political and popular forms the poet engaged in the 1960s, as well as the epic that was conditioned by his exile in the 70s, they continue to develop a politics of freedom, through poetic rhyme and sound. In Gullar’s case, individual practice and the return to his earlier philosophy along with aspects of traditional verse (all characteristics of vanguardist poetry in the 1980s) were not only an aesthetic trend, but also a continuation of his poetics of freedom. Gullar’s work of the time features freedom in two forms: individual artistic freedom activated by close attention to sound, and communal freedom generated by the social nature of the (Neo-Concrete) work of art.

As suggested by the titles Barulhos and Muitas Vozes, sound is essential to these books. “Noises” and “many voices” function as content and metaphor in the poems. The books’ title poems suggest what these words symbolize: the material content of a poem: “O poema / é sem matéria palpável / tudo / o que há nele / é barulho” (“The poem / has no palpable material / all / that is in it / is noise”; “Barulho”); the multiple voices that dwell within each person and together make up the individual voice: “estamos todos nós / cheios de vozes” (“we are all / filled with voices”; “Muitas Vozes”). These many voices also compose the unified poem, which is the extension of the poet’s voice. The many voices refer as well to the voices of readers, who, in Neo-Concrete theory, co-create the poem. The poem’s objecthood thus relies upon reader participation, a reliance that generates a kind of public freedom. But it is a necessarily noisy process, as the poem only comes into being when read, an activity that, whether in the head or aloud, always involves the breath of the reader and the words as sounded by the reader. The voice of the poem, then, is highly material, created by many voices/noises together. 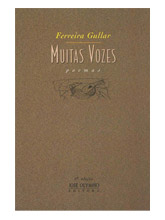 Noise and voice are also themes in Barulhos and Muitas Vozes. The poems treat the lyric “I,” the voices and spirits of the poet’s friends who are gone, the sounds (or silences) of his country and his experiences, and the sounds of the world and the social realm. Voice and sound become metaphors for the dead and lost; they are what the poet hears from friends now gone. The poems (in which loss and death sound at times sad and contemplative, at times slow and quiet, at times rustling with life) become barulhos themselves—the rustle of what remains in the place of loss.

Barulhos in particular is a book about soothing grief, both the grief of death and the grief of exile. Its poems employ sound formally to resonate with freedom despite the difficult political and personal history they address. The collection includes strictly metered and end-rhymed poems, free verse, and rhyme and repetition within lines that appear broken and scattered across the page—an arrangement that looks loose (or free), but is highly structured.[10] One such spaced and airy poem is the well-known title poem, “Barulho”:

Despite the title, this is not a poem of loud rhymes. Sonic repetition, though, drives this sonnet in other ways, beginning with the onomatopoeic a of ar, which echoes through apenas, a mão, rasga, metal, a pedra, azul, and on. A opens the poem, but openness also suggests emptiness. So sound underscores sense in the first line: poems are empty. After all, they are only air.

But assonance is something; a lifts us to the next rhyme. In the sixth line, metal links a to l, and two lines later, the winds change al to ul in azul. From the visual rhyme al / ul, ul reverses momentarily in the blusa that belongs to mulher, and ends finally in barulho. Significantly, ul never achieves perfect rhyme in this poem. Elsewhere, Gullar rhymes barulho perfectly, such as in Muitas Vozes’s “Não-coisa”: “tal dum mar o marulho / … / e reduz a um barulho.” But here, the imperfect quality of the rhyme emphasizes the noisiness of unexpected sounds. The ricocheting ul helps build the poem’s rhythm and balances against the light ar so that when the two finally meet, and air is found to be part of sound, the word barulho resounds.

The choice to rhyme imperfectly and to play with the notion of rhyme scheme is an exercise of artistic freedom that propels the poem. After the power of barulho, the l is displaced, softening the poem’s final rhyme, leitura. The last two lines, visually set off from the rest of the stanza as a couplet, gather their weight not only from their placement and meaning, but from the rhyme that has built and sustained the spare poem. The stanza concludes with the murmur of reading, as we hear the art made from air. The end, with its soft a exhalation, refers back to the beginning; through rhyme and sound we have quickly discovered that air is also the reader’s breath (“o sopro da leitura”), which stirs the poem into being.

Through sound, the poem insists on the corporeality of reading. This physical act is not just receptive but also creative, for poetry, though made of air (“feito de ar”), does not come out of thin air; it is brought into being by the muitas vozes of poet along with reader. In a 1999 interview, reflecting on both Barulhos and Muitas Vozes, Gullar explains, “Na minha visão...[o] poema não é uma coisa estática, terminada, ele é algo em processo. A leitura desencadeia o processo que está latente ali. Ao lê-lo, o leitor transforma a palavra em poesia” (“In my vision...[t]he poem is not a static, finished thing, it is something in process. Reading unleashes the process that is latent in the poem. In reading it, the reader transforms word into poetry”). Gullar’s participatory idea of the poem typifies Neo-Concrete poetry, which distinguished itself from Concrete poetry by its view of the role of the reader. Against the Concrete notion of the poem-object, Neo-Concrete theory elaborated the poem as non-object (não-objeto), achieving objecthood only when engaged by a reader. “Barulho” communicates and enacts this process, through a complex combination of semantic, sonic, visual, metric, phonic, psychic, personal, and physical elements. 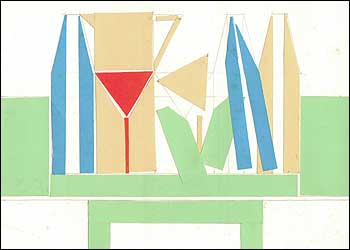 Though not a Concrete poem, “Barulho” is conscious of its form. Line length matters; apparently random line breaks visually align to make the fourteen or so lines of a sonnet. Incomplete on its own—full of near rhyme and not exactly fourteen lines (the number depends on how one reads it)—this sonnet needs the reader to create it.

10. This last arrangement is something of a signature Gullar form, beginning with Dentro da Noite Veloz (1975).