Last year, I wrote an essay on sound in contemporary Brazilian poetry that was published in Portuguese in Deslocamentos Críticos (Lisbon: Babel; São Paulo, Itaú Cultural, 2011). I am glad to share the English version of the essay here over the next several posts. My great thanks to Rumos Literatura do Itaú Cultural, the literary criticism program of Itaú Cultural, for their support of this research.

In the course of performing Um Ano Entre Os Humanos, poet Ricardo Aleixo (b. 1960) recites and sings.1 He plays guitar and bits of hardware. He dj’s from a laptop. Some of these sounds are scripted; others, improvised. All complement the visual aspects of the performance, which include video, a simple set of a chair and table holding just the laptop, a microphone, and percussion instruments, and Aleixo and his co-performer’s both choreographed and spontaneous movements. Sound contrasts, however, with the piece’s most striking visual symbol: the poemanto, a large black cloth emblazoned with white letters that Aleixo wraps himself in and animates for part of the performance, and that appears in a video that plays for part of the piece.

Um Ano Entre Os Humanos inserts and asserts the sound of poetry after a visually-dominated period in Brazilian experimentalism that extended from the beginning of the Concrete poetry movement in the 1950s until the 1990s.2 From the late 1960s into the 1980s, avant-garde poetic sound was concentrated instead in music, through the musicalization of Concrete poems and through the projects and influence of MPB poet-composers such as Caetano Veloso.3 In the 1980s, with the end of the dictatorship, the new notion of post-modernism, and newly available graphic and video technology, the poetic vanguard underwent a transition. Concrete poetry shed its group identity and the founding members pursued individual paths. Haroldo de Campos made the postmodern declaration that “tudo pode coexistir com tudo” (“everything can coexist with everything”), while Augusto de Campos famously pronounced himself “pós-tudo” (“post-everything”).4 Concrete poems began to combine the verbivocovisual imperative with a return to such traditional textual strategies as syntactical order.5 Finally, poets and artists experimented with video to create the next generation of visual poems, advancing poetry in an intermedia direction that took advantage of recorded sound.6 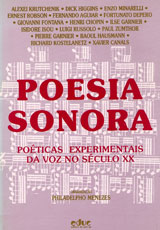 The poetic sound and video experiments of the 1980s flourished into the 1990s under the stewardship of Philadelpho Menezes, a poet, artist, curator, teacher, and critic who was largely responsible for the development of sound poetry in Brazil. Simply, per Dick Higgins’s definition, “poetry in which the sound is the focus, more than any other aspect of the work,” sound poetry has roots in the historic European and Hispanic Latin American avant-gardes, and reached a peak in Europe and North America from the 1950s through the 1980s (Feinsod). Menezes is credited with introducing the term to Brazil in his 1992 international anthology Poesia Sonora: poéticas experimentais da voz no século XX.7 In the face of Brazil’s strong musical-poetic alliance, Menezes worked to distinguish sound poetry from the musicalization or recitation of prior poetic texts. In his view, “não há texto anterior, nem mesmo um texto experimental. O trabalho é...uma exploração das possibilidades da voz e do som como produtores de significados fora do texto” (“there is no prior text, not even an experimental one. The work explores the possibilities for voice and sound to produce meanings without text”; Roteiro 113). Tireless in his efforts to explore sound and new media as primary elements of poetry, Menezes still noted in 1998 that sound poetry “é um terreno quase virgem no Brasil” (“is nearly untouched territory in Brazil”; 113).

By 1980, poet Ferreira Gullar’s (b. 1930) work had traversed many styles and artistic philosophies. His career began by pushing limits of language and form; A Luta Corporal (1954) and “Roçzeiral” are considered exemplary works. After a brief association with the Noigandres Concrete poets, he broke away to begin the Neo-Concrete movement with visual artists including Lygia Clark and Hélio Oiticica in the late 1950s and early 1960s. In 1961, Gullar turned his focus to political work with the populist cultural movement; his poetry throughout the 1960s engaged politics directly and embraced Brazilian folk forms such as the cordel. After being arrested under the dictatorship, he went into exile in 1971. During this time, he composed the landmark neo-epic Poema Sujo (1976). Returning to Brazil in 1977, Gullar entered the transforming poetic scene. Like the de Campos brothers, he melded a return to his vanguard principles with a return to lyric form and individualism. Barulhos (1987) engages the sonic elements of lyric tradition to wrestle with Neo-Concrete relational aesthetics, recent politics, and personal history. 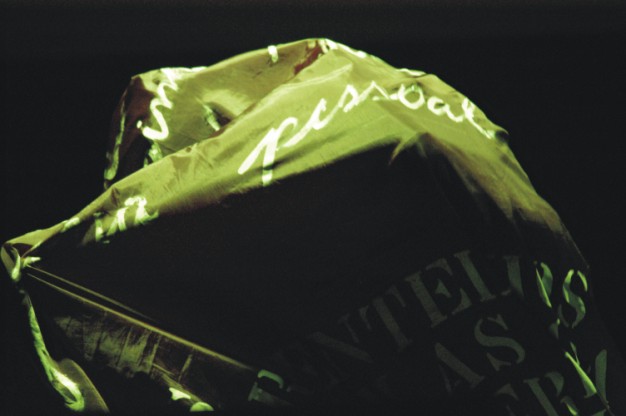 Gullar continued this sound-attuned, lyric exploration of art and history into the 1990s, while Brazilian sound and new media poetry developed. In the year that Menezes published Poesia Sonora, Ricardo Aleixo published his first book, Festim (1992)—perhaps no coincidence for a poet who is also a musician and sound designer. To the “pluralidade de poéticas possíveis” (“plurality of possible poetics”) that characterizes the 1990s, Aleixo contributed Afro-Brazilian traditions of orality and music (Daniel).8 At the turn of the millennium, his performance-based process answers Menezes’s call for an experimentalism that “reponha em jogo o corpo e a voz em suas possibilidades expressivas e tenha em vista a complexidade semântica da comunicação poética” (“recovers the body and voice in their expressive capacity and holds in view the semantic complexity of poetic communication”; Poesia Sonora). The poemanto, created in 2000, highlights Aleixo’s synthesis of the divergent Concrete, Neo-Concrete, Afro-Brazilian, and new media aesthetics into his poetics of live performance, body, and sound.9 Through sound performance, Aleixo’s work explores identity and racial dynamics, introducing these crucial issues to the poetic vanguard and its audience.

Concurrently, in a decade in which poetic experiment internationally is both post-lyric and technology-heavy, younger poets have been producing a style opposite from Aleixo's, but that exhibits some confluence with Gullar’s. The primarily page-based lyric verse of these writers links sound, feeling, visual imagery, and a grounding in space and place, in a constellation that Laura Moriarty has described as “a tonalist.” Poetic sound over the last three decades has developed from poets’ needs in their times, responding to the Brazilian literary past and engaging international poetic presents.

1 Aleixo performed the piece internationally from 2004 to 2007. My description is based on the performance I saw in 2007 at Brown University. For a 2005 performance at the Festival de Inverno da UFMG, Minas Gerais, Brazil, see this video .

2 Although Concrete poetry emphasizes the visual, sound is not absent from it. In “Sound as Subject,” Antonio Sergio Bessa explores the presence of sound in Noigandres Concrete poetics. Marjorie Perloff also suggests that “Concrete and post-Concrete visual poetries” are one place “where sound is once again being foregrounded” in twenty-first century poetry (as opposed to contemporary free verse that disregards sound) (“The Oulipo Factor”).

3 For more on the close relationship between poetry and popular music in Brazil, see Charles Perrone, Seven Faces (1996) and Brazil, Lyric, and the Americas (2010). Philadelpho Menezes notes popular musicians’ attraction to the radical “índole sonora” (“sonic bent”) of Concrete poems (Roteiro de Poesia 111). Parenthetical English translations throughout this essay are my own.

4 See Haroldo de Campos. For a history of 1980s poetry and an extensive analysis of the mid-decade “Pós-tudo” affair, see Perrone, Seven Faces 149-182.

6 Menezes organized the watershed 1985 São Paulo group show “Intersignos,” which featured the latest in visual poetry produced with new technology. In the catalogue of the second Poesia Intersignos exhibit (1998), Menezes proposes the term intermedia to describe texts that fully integrate multiple digital languages. Today, intermedia is re-emerging in the United States as a descriptor for poetry (including what is often called electronic writing). See, for example, the Intermedia Poetry Project.

8 For example, Aleixo adapts the African oriki (an oral poem of praise to orixás) in A Roda do Mundo (1996, written with Edimilson de Almeida Pereira), Trívio (2001), and Um Ano Entre Os Humanos.

9 The poemanto visually recalls Concrete poetry, artist Hélio Oiticica’s parangolés, and capes worn by celebrants of Congado, a festival with origins in Afro-Brazilian syncretic religion that is celebrated largely in Aleixo’s home state of Minas Gerais. Photo of the poemanto above taken by Foca Lisboa in Diamantina, Minas Gerais at a performance of "Um Ano Entre Os Humanos" at the Festival de Inverno da UFMG (Universidade Federal de Minas Gerais), 2006.

Works Cited in Part I

Perrone, Charles A. Brazil, Lyric, and the Americas. Gainesville: UP of Florida, 2010.