I first read about Mina Loy in 1987, in Shari Benstock's book about twenty-odd women artists and writers living and working in Paris in the decades 1900 until 1940 - Women of the Left Bank (University of Texas Press, 1986). Of course Gertrude Stein was the prominent or most-known figure in this community. It took many years for some of her less widely read contemporaries to gain notice. London-born Mina Loy was a painter, poet, essayist, sculptor, collagist and a member of the prestigious Salon d'Automne in early twentieth-century Paris. She was in a relationship with the proto-Dadaist poet and pugilist, Arthur Cravan until he disappeared, mysteriously, possibly into the ocean, off the coast of Mexico in 1918. She became involved in the Italian Futurist movement but soon became disillusioned by it and began to write satirically about Futurists' attitudes towards women. Her poetry was praised in journals by T.S. Eliot, Ezra Pound and, later, by Kenneth Rexroth. She lived for three decades in France and Italy moving, in 1936, to Lower Manhattan and the Bowery in the United States of America.

In 1989 I was spending a weekend in a house in the bush at Bullaburra in the Blue Mountains, about 100 kilometres outside Sydney. The house was owned by publisher and book importer/distributor Pat Woolley. Among the books and magazines there, I found a copy of  Jonathan Williams' Jargon Society 1982 edition of  Mina Loy's The Last Lunar Baedecker. Although I had heard of Mina Loy, until then I had not read her work and I was astounded by the poetry, especially 'Anglo-Mongrels and the Rose', and her short essays and notations ('Ready Mades') and profiles of other writers and artists.

I began to research Mina Loy and found a couple of articles by Carolyn Greenstein, later  Carolyn Burke. It transpired that Carolyn Burke was working on a biography of Mina Loy. Serendipitously, in 1995 I noticed that Carolyn Burke was launching a magazine for a University of Western Sydney women writers group at gleebooks in Sydney. I introduced myself to her at the launch and asked if she would be willing to be interviewed. I had no idea of where the interview could be published but I was keen to find out as much as possible about Mina Loy. I borrowed a tape recorder and we met in  Carolyn's tiny borrowed flat in King's Cross. 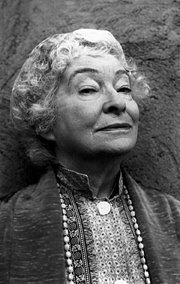 Carolyn Burke's exhaustive and illuminating biography, Becoming Modern : The Life of Mina Loy, was published by Farrar, Straus & Giroux in 1996.

In 1984  Carolyn Burke had published an essay, Without Commas, on the friendship and literary connection between Mina Loy and Gertrude Stein in issue four of Poetics Journal. She wrote that when Gertrude Stein was visiting Mina and her then husband, painter Stephen Haweis, in Florence in 1911, Haweis thought that The Making of Americans needed commas.  Mina though 'was able to understand the absence of commas'.  Later, the essay was incorporated into Becoming Modern (P129) in an extended piece on the relationship between Mina Loy and Gertrude Stein. Here is a brief extract -

"Meeting Gertrude for the first time at the [Mabel] Dodge's, Mina, too, felt an affinity with this large, intelligent woman. It was not until she received a formal letter of introduction from Alice Woods Ullmann, their mutual friend, that she wrote to invite the Stein household to the Cosa San Giorgio. Since Leo was busy, Gertrude and Alice came without him. Recalling the day with pleasure, Toklas noted that "a friendship with her commenced that lasted over years." Mina regained her high spirits in their company: she was, Alice wrote, a charming companion, "beautiful, intelligent, sympathetic and gay." On another occasion, when Mabel asked Gertrude, Alice and Mina to dine with André Gide, Alice watched their hostess drape herself on the chaise longue to converse with the Frenchman while Mina, "who thought this highly ridiculous," danced behind them with an imaginary partner.

Gertrude later recalled that the Haweises were "among the very earliest to be interested in Gertrude Stein." Although she had published Three Lives in 1909, the book sold poorly, and so few readers had responded positively to The Making of Americans that Gertrude noted, "I am writing for myself and strangers." When Stephen pleaded for the insertion of commas in her long, unpunctuated sentences, Gertrude replied that "commas were unnecessary, the sense should be intrinsic and not have to be explained by commas and otherwise commas were only a sign that one should pause and take breath." Following this mimetic demonstration of her principles, Gertrude added that while she had granted Stephen two commas in exchange for a painting, on rereading the manuscript she took them out. The passage concludes: "Mina Loy equally interested was able to understand without the commas. She has always been able to understand."

After my disappointing failure in finding an Australian magazine interested in publishing our interview, a friend of Carolyn's published it in the Boston Review and then I published it on my web site in 1996. The following year John Tranter offered to re-issue the interview in Jacket magazine.

Carolyn Burke has continued to write biographies. Her book about photographer Lee Miller has been translated into French and most recently she has published No Regrets: The Life of Edith Piaf.

Recently, I mentioned Mina Loy's two pieces on Gertrude Stein - they are linked here on my blog, the deletions.

To revisit the featurette on Mina Loy here are the links to issue 5 of Jacket magazine :