Find the nest where freedom had no paper works

An interview with Lionel Fogarty

To complement the current feature on 'tabis' - Aboriginal song poetry from the Pilbara, I want to revisit the first issue of Jacket, published in 1997, in which Philip Mead, poet, anthologist and then an academic at the University of Tasmania, interviewed the contemporary Australian indigenous poet, Lionel Fogarty.

Lionel Fogarty talks about growing up on a government controlled reserve in Queensland, Cherbourg Aboriginal settlement, and about the effect of Christianity and white state education on Aboriginal traditions. He also relates the death of his brother, Daniel Yock, a dancer and song man who died in a police van, after being roughed up by the Brisbane police. Lionel was engaged in fighting for justice for his brother's death in custody.

He also talks about the kind of poetry he writes. Philip Mead said that Lionel Fogarty “opened up the new space of black Australian surrealist writing.” 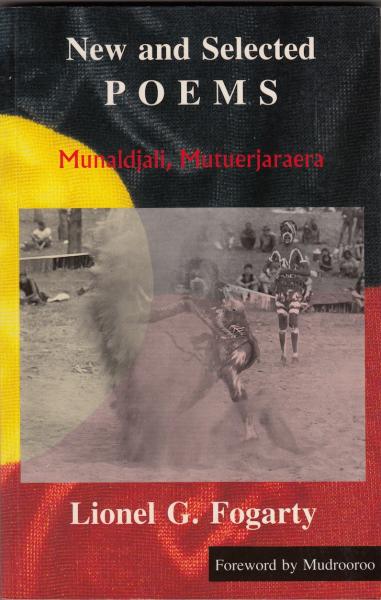 Lionel says I think that with my little bit of Aboriginal language, I think what people should do is read my poetry, in an Aboriginal way, take the Aboriginal side of my language, and then reflect back on the English side.

Lionel Fogarty says that among his influences are Oodgeroo Noonuccal, Kevin Gilbert, Mudrooroo and Archie Weller, all well-known Aboriginal writers and activists from the 1960s on.

In 2004 Keeaira Press published Lionel Fogarty’s collection of poems and drawings,  Minyung Woolah Binnung: What Saying Says. Here is a poem, “Mission in Action,” from that collection -

The laughter ranting wind dry to my hearing
dashing pass all bad good to an
pretentious
am anus
Dashing over a place to stay
must temper amber within
my activities
Prevoices special too noting arts
hold story untold
To hear the people unknown don't mean
you I dem is mad
All will tycoons "cheese a face
Galleries off sea waves the wine
we drank many a many years ago
Cheated popular on the debated
on no celebrate on day
Dead my later after months
walk the bashing without
a bath"
Stay where loneness is gentling as a eaten braid goals
Dead as air when drunken on smoked
Saliva a vein in
a blood pure
as love black fellas calls
fight more over
lies were sound are fig trees bake in pie to
Life's give it back
when hum black
Strife is only a rife for those refused
Fused by resisted holiness is hole seen by history
History pre hole seen above
Being glad as land is a test on cities
rests as signs dedicated to the carted land just: cause
To a strong stray, I won't stay all my life's far and wide bring
chaos to the minds, feeling in airs
not mystified
React to this obscenity with laughter cunning rebellion
Wizened skies mountain moonlight times wondering packs
unreachable
Feet along with a bad insult
Fuck wick hidden
behind there men's sin sips
Are as sad as a tap dipped as
penny dead coin meat head
Lay in my bed
for rest of my best
not wanting a soulless nor
Artless

Philip Mead, who is currently the inaugural Chair of Australian Literature at the University of Western Australia, wrote further about Lionel Fogarty's poetry in his ground-breaking book Networked Language: Culture & History in Australian Poetry which I reviewed in Jacket in 2009.

Here is the link to Philip Mead in conversation with Lionel Fogarty in Jacket, where there is also a link to three of Lionel Fogarty's poems -