Poetry and the 2020 election

Introduction, a note, and first thoughts

WE WERE commissioned to produce, in whatever form or scope we saw fit, this multipart series of commentaries to run from now into November on poetry and the election, bracing for and/or embracing the November 3 vote.

Our thought was to showcase responses to this poetry-politics crisscross from Hudson Valley poets. Elections are decided by bodies of people on land with arbitrary boundaries. The Hudson Valley is as good a set as most — at once full of wild practitioners and via the Hudson River connected to New York City, with many of us circulating back and forth. That means it breathes and integrates myriad influences, interests, and ways of whipping up words, among other poetic materials.

We wanted the poets who responded to this call to be free in what they do — as immortal, uncanny, and useful as they saw fit — with the proviso that they maintain foremost in mind that they are writing as commentators on poetry in relation to the 2020 elections or vice versa.

In the way of suggestions — though in no way limiting what they chose to do — we posed some directions or instigations, which you may find at the bottom of this post.

That pretty much takes us to now: this first post introducing what’s to come, which we haven’t yet seen from most of the other contributors. This puts us all on the same plane, analogous to where the world is, wondering what this coming vote may bring.

A Note on “THIS POEM KILLS FASCISTS”

NOODLING AROUND what more to call this poetry-election series, the above phrase spontaneously arose in my mind. I see we are at war for — as Biden recently spoke — “the heart and soul of our country.” Setting aside whether a semi-arbitrary bounded portion of a planet’s surface may be rightly said to possess a “heart,” let alone that even-more-nebulous construction “soul,” we do have a clear enemy: a form of far-right, authoritarian ultranationalism, characterized by dictatorial power, forcible suppression of opposition, as well as strong regimentation of society and of the economy, or “fascism.” The people who ascribe and march to its call are fascists. Since all these fascist markers, to various degrees and however ineptly, are present in our chief executive and his Republican toadies, I call them fascists.

This is a bit — though a very little bit — hyperbolic, as is “kills,” which I don’t advocate past metaphor. Yet, as above, I see that we are at war and the field of battle on which American citizens of voting age find themselves arrayed is the November vote. Some may feel the sentence bakes in a confrontational stance that may be a turnoff and/or set a militant strain that our contributors may sense they need to match, like a Lombard effect of escalating radicalism. That may be true — it has a propagandistic ring — and if so, let it be. I believe the poem will save the world — if it isn’t it.

The phrase of course derives from the Oklahoma-born poet folk-rocker Woody Guthrie (1912–1967), who in 1943, in wartime, wrote on his guitar “THIS MACHINE KILLS FASCISTS.” He did that shortly after writing “Talking Hitler’s Head Off Blues.” [Woody lived in Beach Haven apartment complex in Gravesend, Brooklyn, from 1950–52, owned by white supremacist Fred Trump. Among  Woody’s other works decrying Agent Orange’s father was his reworking of “I Ain’t Got No Home” to include: 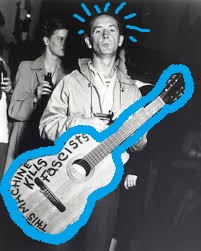 As you will note, it is a blue guitar.

The variation “This Poem Kills Fascists” isn’t common. It appears as a section heading within a chapter entitled “The Left Needs Rhythm” in Sarah Ehlers’s Left of Poetry: Depression America and the Formation of Modern Poetics (University of North Carolina Press, 2019) and in an online poem by dramaqueen entitled “Trigger Warning.” In a seeming misspeaking in reference to Guthrie’s words it surfaces in a Library of Congress transcript of an interview with the Spanish writers Ana Merino and Manuel Vilas conducted by Georgette Dorn, the library’s former chief of the Hispanic Division.

William Carlos Williams in his introduction to the book of poetry The Wedge, published a year after Guthrie inscribed on his guitar his famous phrase, asserts that “a poem is a small (or large) machine made of words.”

The first words of that introduction are: “The War is the first and only thing in the world today.”

First Thoughts on Poetry and the 2020 Election

WHEN I first started thinking about these posts early this year, I was consumed by fear about the election, fear that Donald Trump would be re-elected, fear about the immediate future of the country and the warming world. With the government totally failing to deal with the coronavirus pandemic and its effects, my fear about the election has abated somewhat. Though, obviously, “plots are rife.” But even if Trump loses, I see a far worse place than I hoped for a few years ago, and one that could easily collapse into something still worse.

As far as poetry is concerned, I feared that any chance of a solution to the high cost of college education was slipping away. That would ensure the further shrinkage of humanities departments, reducing the number of jobs for poets and students of poetry. Fewer people engaged in the intensive study of poetry and transmitting that learning impoverishes the ground of poetry. Poetry can survive that. Poetry can survive anything, even burial in a mass grave. But poets and students of poetry can’t survive anything. They can be discouraged, give up. Nothing this year has caused my fears for them to abate. Even with a change in the White House, the long-term costs of the pandemic could easily soak up the funds that might have been used to transform American higher education. And then there are all the other effects of the pandemic on education, short-term and long-term … I hope the future proves me wrong.

In this haze of fear and pessimism, I started reading some political poems that had always resonated for me, some about elections, some not, including Walt Whitman’s “When Lilacs Last in the Dooryard Bloom’d,” William Carlos Williams’s “Impromptu: The Suckers,” Robert Lowell’s “Inauguration Day: January 1953,” Charles Olson’s “The Hustings,” dedicated to Amiri Baraka, Bernadette Mayer’s “The Presentation of Fruitstands in January,”Allen Ginsberg’s “Capitol Air” and Baraka’s own “Somebody Blew Up America.”

I came to the possibly defeatist conclusion that American political poetry is a series of responses to defeats. That’s what I’m going to write about in our next post. 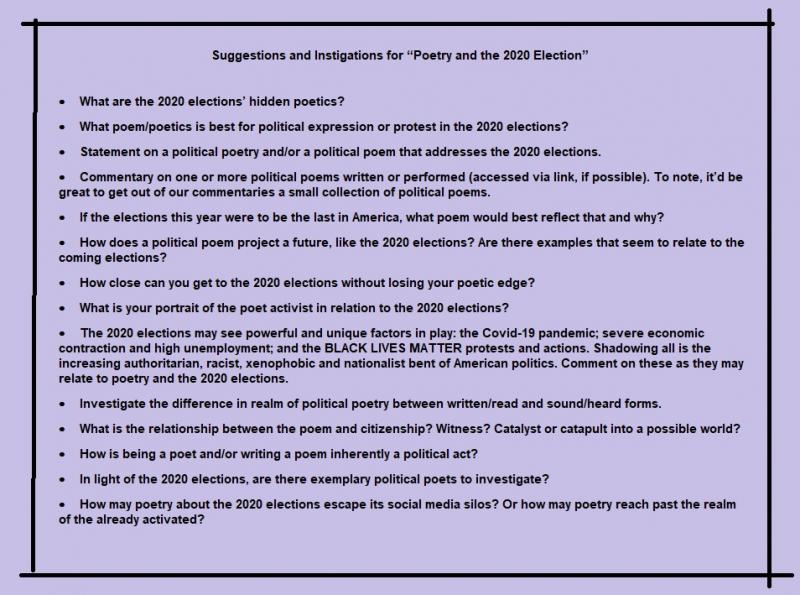 Michael Ruby, Sam Truitt, and fellow poets in New York's Hudson Valley survey the intersection of poetry and electoral politics — especially with regard to the November vote — and try to tell it like it is.

Michael Ruby is a poet who has worked for more than thirty years as an editor of articles about US politics at The Wall Street Journal. He is the author of The Star-Spangled Banner (Station Hill, 2020), The Mouth of the Bay (BlazeVOX, 2019), American Songbook (Ugly Duckling, 2013) and Compulsive Words (BlazeVOX, 2010), among other poetry books, and a trilogy in prose and poetry Memories, Dreams and Inner Voices (Station Hill, 2012). He is also coeditor of Bernadette Mayer’s collected early books, Eating the Colors of a Lineup of Words (Station Hill, 2015). Recordings of many of his books, including his new book, are available on PennSound. He is currently living in the Hudson Valley in Gallatin, N.Y.

Sam Truitt was born in Washington, DC, and raised there and in Tokyo, Japan. He is the author of Tokyoatoto (Station Hill, 2020 [October release]), Heresway (MadHat, 2018), Dick: A Vertical Elegy (Lunar Chandelier, 2014), Vertical Elegies 6: Street Mete (Station Hill, 2011), Vertical Elegies: Three Works (Ugly Duckling Presse, 2008), and Vertical Elegies 5: The Section (Georgia, 2003), among others. He is the coeditor of In|Filtration: An Anthology of Innovative Poetry from the Hudson River Valley; and Eating the Colors of a Lineup of Words: The Early Books of Bernadette Mayer. Robert Creeley likened Truitt to “a contemporary Everyman,” and he is the recipient, among other recognitions, of numerous Fund for Poetry awards, a Contemporary Poetry Award from the University of Georgia, and a Howard Fellowship. The producer and a cohost of the podcast Baffling Combustions and Director of Station Hill Press, he lives in Woodstock, NY. For more, visit: samtruitt.org

Jacket2 commentaries feature invited posts by poets and scholars who take a close, serial look at poetry scenes, archives, poetic concerns, or theoretical clusters. Commentaries, although curated, are not edited by Jacket2 staff. We welcome your comments. Send queries and notes to Jacket editors here.