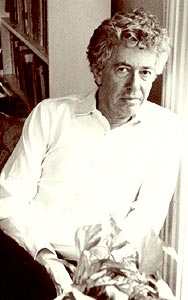 In the midst of Low’s occupation and siege, I was assigned to a shift to stand guard at one of the windows. Behind me and out of sight was one of those tall poles with a hook used for opening the tall windows — a possible weapon if indeed the “jocks’ and other right-wingers made their charge. On the grass below stood the line of professors, and among them was Kenneth Koch, doing his stint on the faculty cordon. He looked up at me, smiled in his affable way, didn’t preach or wail or gnash his teeth, and he offered a friendly wave at me and the other editors of the literary magazine, Les Gottesman and Alan Senauke. He couldn’t keep from enjoying himself, couldn’t take things too seriously, which was in its own way very unnerving. But it was good to see him, in all his goofiness, and we waved back. He had thrown his lot in with the rest of the feeble faculty, which saddened us, although we couldn’t be mad at him. His humor lent him some transcendent grace.

“Did you write any poems?” he chuckled up at us.

No, we hadn’t. We set right off to punch out a bunch of spontaneous three-way collaboration poems, each of us taking a turn on the typewriter we had liberated from President’ Kirk’s secretary.

So terrible, so embarrassingly idiotic were these poems that we threw them away almost immediately. The muse of Andre Breton and Tristan Tzara and Frank O’Hara had failed us, and moment-to-moment rhapsodic bop would sound only like Allen Ginsberg, and there was only one Allen Ginsberg. We couldn’t bear to write tedious Fight-Team-Fight anthems or lugubrious, boring manifestos. All we could knock out was intense, manic gibberish when what was needed was something entirely new written in a language no one had yet invented.

Still, I marveled at Koc’’s sweetness, his unwillingness to change his peaceable demeanor in the face of chaos and violence, his chuckle, and his question, “Did you write any poems?”

I’ve always remembered that moment, and at other tough times I recall the question. Throughout my life, it has formed a kind of mantra. Driving headfirst off a cliff, hard knocks on the Indian reservation, wrestling with COINTELPRO, whirr of printing press, bombs in Beirut, broke, evictions, whiffing tear gas while taking a shit in Gaza — whenever there was conflict and danger, I would remember Kenneth Koch’s chuckle, see his sweet grin, and I would recall the pleasures of peace: “Did you write any poems?”