I can still recall how build-up to the festival was exciting—partially because some of it transpired in newly-arrived online discussion boards, like the Poetics listserv (the 1993 archive of which is now unavailable). I was particularly interested because organizers Juliana Spahr and Gizzi, who I did not know, were assembling a group of writers I was largely unfamiliar with (I had read or heard only five of the thirty-nine invitees, listed in the announcement at the link above, beforehand). Around that time, with student loan money, I made my first major investment in digital recording gear—a portable DAT deck. As became my wont, I recorded the New Coast, in order to study better these “emerging poets from North America who have come into print within the last five years” who were gathering “to discuss current poetics”. I remember Robert Bertholf catching wind of my intentions and sternly making it clear that he owned all “rights” to the recordings (which I have since learned is untrue). It was fantastic that the events were held amidst the Poetry/Rare Books Collection on campus and at one of the city’s most active art galleries (Hallwalls Contemporary Art Center); most of Buffalo’s esteemed Poetics faculty was there, though Robert Creeley did not attend.

Declining, for no apparent reason, to respond to the open call for contributions to the extensive two-volume collection associated with the festival, which include texts by more than 119 different writers, Writing from the New Coast: Presentation and Writing from the New Coast: Technique (published as oblek 12, Spring/Fall 1993; see Steve Evans’, “Anthslide”), I consider these belatedly offered documentary recordings as a gift and keepsake to that community, preserving the readings for others to hear. As always, glad I took the time and dealt with the logistics of capturing these events. I was a newcomer to this community at the time, and the New Coast was very informative as a result of the people I encountered, including a few I befriended and later collaborated with.

Since recordings of the event are now in circulation, I imagine and hope other responses or reflections will emerge, and here look back and share a few of my impressions.

Performance elements are stressed in few of the readings, and there is, overall, a serious tone even though a few presenters use humor and sex to engage the audience. The most memorable readings for me are those by mIEKAL aND/liz was, Will Alexander, and Lew Daly, which quickly come back to mind for different reasons. Steve Evans was sharp, and did an extraordinary job at moderating the panels (which I apparently did not record). In general, I remember specific instants hearing real clarity and insight, especially in the discussions, yet also other instances where it was not difficult to question the importance or newness of the orations—so much of which did not embrace, beyond its language, the secondary character of music (though Lee Ann Brown, as is her custom, did sing a bit, and Chris Stroffolino at least once occupied a piano at the hotel where many participants were staying). It was 1993, and—excepting aND and was (who said, “a piece of paper comes between me and the music” at one point, and whose young son Liaizon joined them onstage), as well as Loss Glazier and Ken Sherwood (who were getting the Electronic Poetry Center and other online projects going at the time)—it was an unsurprisingly print-centric group, which was frustrating for those of us with “new” or multi- multimedia interests. At an offsite reading held at Carla Billitteri’s apartment late the festival, Steve McCaffery and others (including my own subdued mouth harp offering) did let loose a bit more. 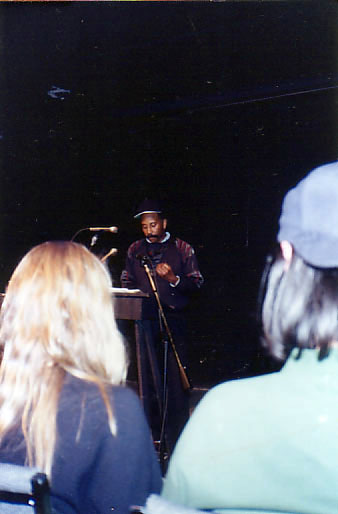 Some youthful nerves were evident, reflected in panel dialogs provoking unforgettable moments. For example, part II of Tony Dohr’s review of the New Coast in The Poetry Project Newsletter recalls a conflict where Alexander (characterized as “an individual who had so thoroughly reworked the language that the meanings of such simple & yet rigidly defined words as combustible took on whole new meanings”) came under fire by a panelist who had “moments before” called for “a new imaginary tense”—a predicament leading Dohr to question, “How can you be sure you disagree with someone when you can’t actually be sure he is saying the same thing you think you hear?”. [Note: See also part I of the review; thanks to Nicole Wallace and Tony Dohr for furnishing the scan of part II].

Much of the work presented, though not all, could be characterized as collage or pastiche, which is sensible since we know everyday life through snippets of language overheard, with our own remote controls changing the channel as we desire, as slippery and subjective as that might be. My notes divulge that there was much panel discussion about “power”, “position”, “subject” (in fact “Subject and Position” is the title of a section of Writing from the New Coast: Technique), and the importance of reading—sensible, then and now, given the untenured and intellectual conditioning/background of those in attendance and in light of direction of both literary and popular culture in general seem to be lean toward.

Other noteworthy moments or aspects of the New Coast for me include: Brown’s emphatic pronouncements about how it was important to “get the work out there” (meaning out of our notebooks and into circulation), Ben Friedlander’s ideas of, “disentangling ourselves from ourselves” and a need to “mark the xenophobia and get on with the proceedings”, Cole Swensen's "active parenthesis", C.S. Giscombe's "poem as geographic statement of situation", and aND and was’s severe alternativism (in comparison to everything else) are among the sensibilities that offered much to think about and stayed with me. I was not entirely impressed with the (unattributed) person who referred to duende as “creative gangsterism” (although maybe there’s something really positive in that)!

Early on during the festivities, someone (possibly Jena Osman) said, “the trail is where we are”—a smart sensibility and touchstone in terms of awareness and life of poetry. As I began to wonder why I didn’t have recordings of the panels, I discovered a journal with thirty pages of notes! As a first year doctoral student, I trusted my ability to capture what seemed most relevant, rather than need to be able to review the whole. In terms of documentation, my sensibility placed more value on the poetry being presented rather than recording everything. I would never do that now! Since I have the notes, I can see what I thought was important at the time, but my sense of what that would be could be different now and better—for you and me both— to hear it all again.