Several of the poems in Gary Snyder’s The Back Country (1967) were written in an oil tanker, one of his methods of transpacific travel as he was writing poems melding Far Eastern philosophies to his native Pacific Northwest realities in the late 1950s. One, titled simply “Oil,” written near the beating “furnace heart” of the tanker, reveals the cargo to be “what all these crazed, hooked nations need” -  "long injections of pure oil." But it’s Snyder’s “Smokey the Bear Sutra” that is perhaps the first Oil Spill Poem, most certainly written after the 1969 Santa Barbara Oil spill, the first large scale fossil-fuel-based ecological disaster of the Anthropocene. In the poem, Smokey the Bear is raised to supernatural status as a parody of the U.S. Forest Service's attempt to stamp out forest fires; the poems contends that “those who recite this Sutra and then try to put it in practice […] will help save the planet Earth from total oil slick” and its recitation is also useful for anyone “threatened by advertising, air pollution, television, or the police.” The sutra itself consists of four short lines about (cigarette) butts. Still, the poem offers a lesson on in the mono-directional nature of the messages that define American culture (think advertising) in contrast to the multi-directionality of the sacred "messages" associated with Hindu gods and goddesses and their capacity to address multiple ailments. This is clear in the poem's humorous semiotic analysis of the image of Smokey the Bear.

If this is the first Oil Spill Poem it's because it came on the heels of the oil spill that is credited with giving birth to the environmental movement: in the year following the January 28, 1969 explosion that cracked the sea floor in five places to release the pent-up crude oil beneath Union Oil’s Platform A oil rig, the California State Lands Commission placed a moratorium on all new offshore drilling in state waters, Nixon signed the National Environmental Policy Act in 1969, which requires environmental impact reports, the California Environmental Quality Act was adopted, and the first Earth Day took place.

Now we’ve seen two much huger Oil Spills that dwarfed the first Oil Spill – the Exxon Valdez (March 24, 1989; 11 million gallons) and BP’s Deepwater Horizon (April 20, 2010; 210 million gallons). We now nominally link these regional events to multi-national corporations. As if anticipating the Deepwater Horizon/Gulf Oil Spill, the Gulf Oil Corporation rebranded as Chevron in 1985, and with the recent disaster the synthesis is complete – oil spills are now plain all-American – as we now know from the Plains All American Oil Spill (May 19, 2015), a river of oil of a mere 105,000 gallons that bled into the Pacific from a burst pipeline. We don’t know how to process these numbers – a fact that motivates Chris Jordan’s well-known collages, but we do know that each disaster signals a point on a trajectory of money and oil from here to here to here; we know we are embedded in a resource extraction-serving infrastructure that sutures the North American continent from north to south, from midland to coast, that sutures it to other continents across the ocean. We've all got oil in our poems. Anne Waldman's Manatee/Humanity (Penguin, 2009) makes a plea to "Big Oil" to "get out of here [...] get out of the picutre." Marcella Durand's The Anatomy of Oil (Belladonna, 2005) is an epic attempt to deal with the inescapability of its effects. Michelle Detorie, a poet living in Santa Barbara since 2006, has been posting oil poems to Facebook: "since I have lived here, all my poems have oil in them. We've all got oil in our poems, visible or not. And we know that we need multiple modes and means and venues to respond.

We can debate about the (in)efficacy of poetry-as-politics. We can also worry less about poetry as the cause of something, and think about it as part of a larger set of effects. Though we debate literary terminology for it - eco-/logical, environmental/ist, etc. - it is primarily a response to – a movement of – the Anthropocene in that it also has its roots in the 1969 Santa Barbara Oil Spill. Moreso than inspiring poetic responses, the disaster created a community capable of urgent response driven by a fear of dying wildlife and habitats. “GOO” – Get Oil Out – was a popular slogan-turned-environmental organization, and while we didn't get it out in that sense, we conceived of and enacted large-scale legislative solutions on the heels of on-the-ground recovery efforts. For the first time, we waded into the ocean to retrieve oil-smothered birds and seals. We didn’t know about the health hazards and the necessity of properly armoring their bodies against oil's toxicity, and the images from the clean up are practically pastoral: pony-tailed college students in t-shirts bathing seabirds in large wooden buckets. We have seen nothing like that sweeping response since because we are economically and materially embedded in the mechanisms and messages of what Joyelle McSweeney calls the necropastoral, “a political-aesthetic zone in which the fact of mankind’s depredations cannot be separated from an experience of ‘nature’ which is poisoned, mutated, aberrant, spectacular, full of ill effects and affects.” According to Linda Krop of the Environmental Defense Center, while we have many more regulations today, and technological advancements, “it doesn’t matter how strong the regulations, how advanced the technology is, oil spills are inevitable. And the only way to stop oil spills is to stop oil development.” When oil spills, we as a culture, if the popular media offer a reliable portrait, are more consumed with economic than ecological damage. We balk at the price tag associated with spills. Again, those numbers mean nothing. We tsk at he lack of accountability, snicker at the greenwashing of corporation images.

It’s no coincidence that the Gulf Oil Spill generated a host of ecopoetical/activist/affective/political responses. The sense of urgency that made legislative change possible in 1969 has morped into poetic urgency. There were multiple responses including thousands of poets. In New York poets gathered for Oil Kills Poets Spill, because, according to Leda Hunt of the Endangered Species Coalition, “To know the impacts of oil, to feel it in our bones, we need much more than statistics. This kind of knowing can only happen with the help of artists and poets.” Poets for Living Waters instigators Amy King and Heidi Lynn Staples emphasize the necessity of affective response in the face of environmental disaster, citing Zen Master Thich Nhat Hanh’s suggestion that “We should not talk in terms of what they should do, what they should not do, for the sake of the future. We should talk to them in such a way that touches their hearts….” North of the U.S. Canadian border and proactively drawing on community-based writing workshops, The Enpipe Line (Creekstone Press 2012) project, originally conceived as a 1,170 kilometer long line of collaborative poetry (matching the proposed pipeline’s length), reached over 70,000km. These are activist poems, not “poet’s poems”; Stephen Collis argues that “the precise point this anthology raises—the very fact of the concatenation of art and revolution that it works—is the disappearance and impossibility of the 'purely aesthetic' in today’s world."

The power of heterogeneity is exemplified in the “Shell No” protest against the arrival of Royal Dutch Shell’s off-shore oil drilling rig, Polar Pioneer, to Seattle’s Eliot Bay on May 16, 2015. "Kayaktivist" is a catchy phrase and the gathering of their petroleum-based vessels creates great colorful and inspiring collages. But there were also joined by the Lummi Tribal Nation in traditional canoes. The kids are photographed against a backdrop banner reading “Chief Seattle is Watching.” This news report leads off with a photographs of kayaks and canoes, and credits the “the emotional power of canoe travel” and Lummi Tribal Nation member Justin Finkbonner with making those photos possible: he instructed his kids to paddle within a few hundred yards of the oil rig instead of remaining some distance away at the mouth of the Duwamish River, as was planned by kayakactivist organizers. Finkbonner objected, “said, ‘Hell no! I’m going up the river to the rig and bring the kayakers up there to surround it.’ The kayakers followed, hence the pictures.”

What does this have to do with poetry? We’ll find out soon enough. We all have to hold the memory of the places we live and enact what it means to live anyhere; we imagine into reality the future of those places. Poetry has always been a first step in the process of (re)inhabitation. 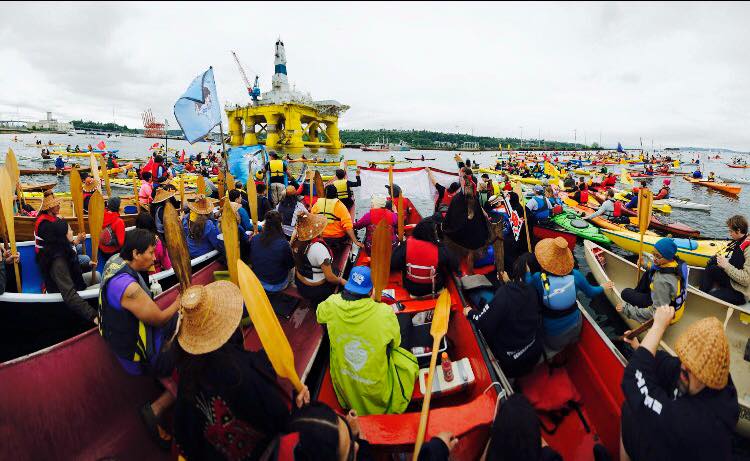