Some unnamed species of porous poems

A need to register the ecological effects of anthropocy may motivate an ecopoetic approach to soundscapes. But there’s also the fact of what scientists are calling “learned deafness” for which embodying listening-being becomes an organic imperative. Embedded, active listening is connective, emplacing, locating. But more than that: what if where you are is what you hear, and vice versa? According to Anthropologist Tim Ingold and constituents of bioregionalism, what we contemporary humans lack is inhabitant knowledge – and engaging sense capacities in acts of listening-being is one way contemporary poets cultivate inhabitant knowledge.

Informed by Soundscape Ecology, acoustic imbalances, and the fragmenting of natural habitats is the focused listening in Jonathan Skinner’s Birds of Tifft. Language is modified to “capture” sounds like a directional mic, registering, in a poem titled “Beaver,” shift from ground, to figure, to ground, to figure, etc., with the mammal making but a brief appearance via a couplet near the center of the poem: 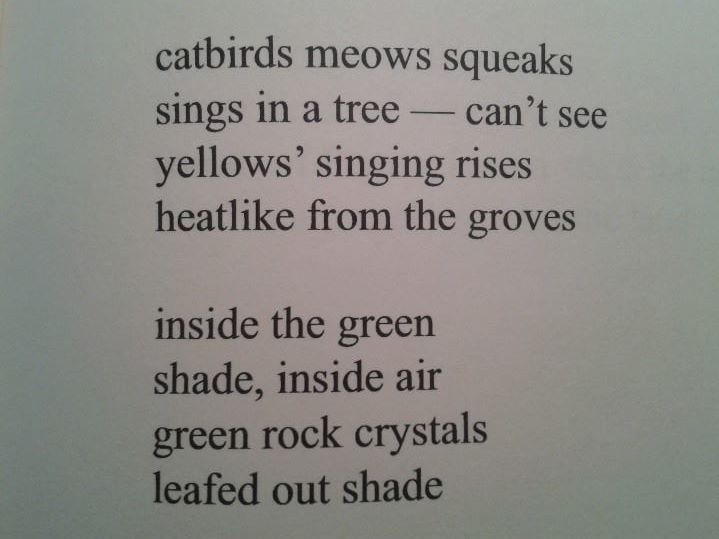 Listening-being, in this documentary poetics, is emplaced in a post-industrial urban nature preserve. I see in it an attempt, through presence, to create for each encountered non-human, a “place” for non-human animal being.

Bird, squirrel, and other animal voices appear in many of Brenda Hillman’s poems, eliciting a sense of openness to interspecies subjectivity, a sharing of the awareness typically correlated to the ‘I’ in a lyric poem. “Two Summer Aubades, After John Clare,” published in Season Works with Letters on Fire, arise from and give primacy to bird sound, but its "purity"  is quickly compromised. Contemporary human language of the environment – of disaster – blends with birdsound to invoke the larger context of listening: the destruction of fragile of ecosystems due to resource extraction. The towhee “wakes a human” to this fact through echoic exchange: 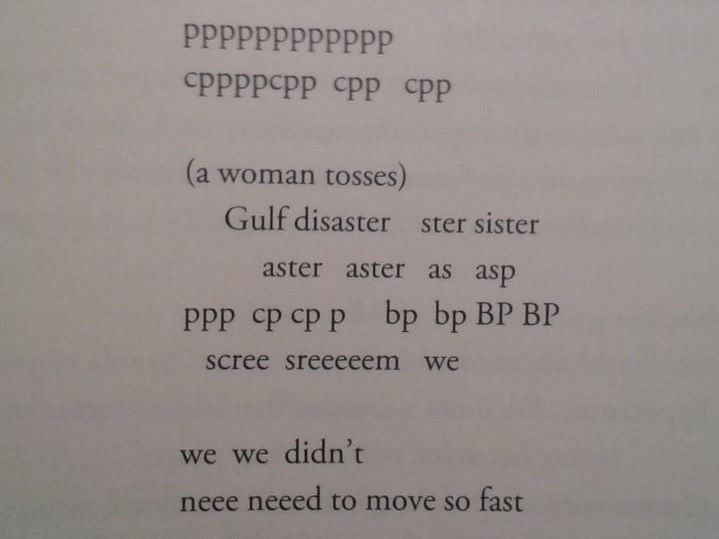 This is then balanced against the delicacy of the hummingbird’s attempted “extractions” from an article of clothing in the second aubaude, “woman in red sweater to hummingbird.” Perhaps the burden of knowledge is not ours alone, and we can tune into animal mourning and warning, if we listen.

Warning is even more pronounced in Jessica Smith’s Life-List, where text creates a complex aural-visual field with a preponderance fragile, isolated consonantal sounds. Organized in two sections, “Observation” and “Memory,” the book suggests presence and absence as nodes of being-listening. In each, human language is fragmented, made porous, by the stretch of sense out beyond the site/page/poem. The poems both describe (the espied bird, the complex of ideas and events – the “knowhere” – that clusters around the bird) and document (through onomatopoeia, through the “mapping” of text on the page) the sensual-intellectual textures of birdwatching, here in “kites”: 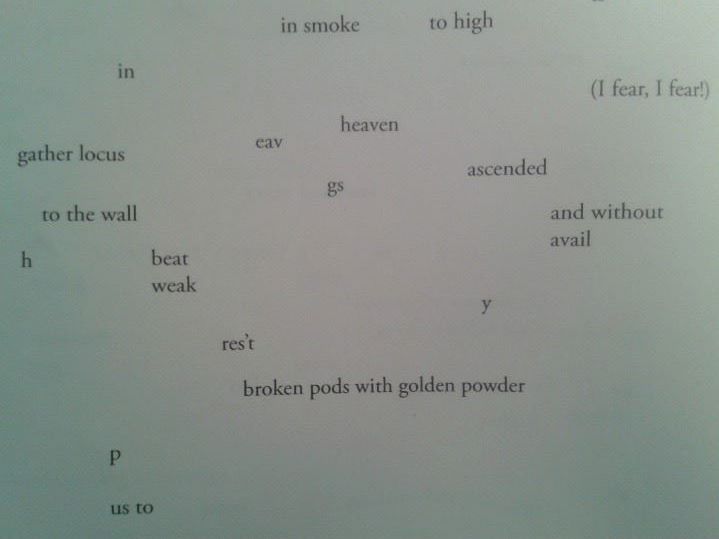 The soundscape is as fragile as the text of the poem itself, which, if lifted off the page, would disintegrate, words and isolated letters sifting noiselessly down. Thus is the fierce sense of attentiveness evinced here.

In Brian Teare’s “Tall Flatsedge Notebook,”published in Companion Grasses, I sense a shoring up against such ruin. Where subjectivity on Smith’s page seems physically immobilized or transfixed, in Teare’s short stanzas there is a sense of mobility and thus connection across different sites. Identified in marginal notations these are a nature preserve [Chimney Rock, /Point Reyes /National Seashore], a city residence [59 Albion St., San Francisco], and a variety of texts [philosophy, poetry, plant field guide]. The blank spaces serve to bridge disparate contexts and observations (“a bridge is where we are / there’s no apart,” the poem ends). Intimate inter- and extra- personal lyric subjectivities are animated in the movement from site to site. The wind at Chimney rock: 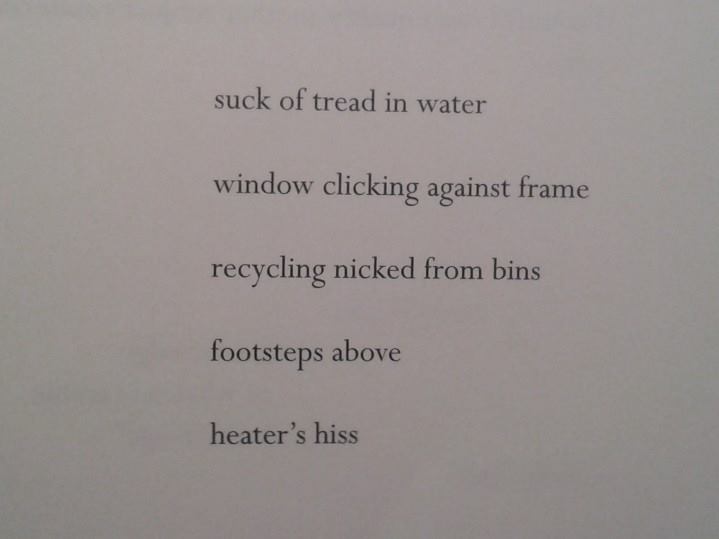 is as complex (information-rich) as the “five sounds” listed in the apartment soundscape: 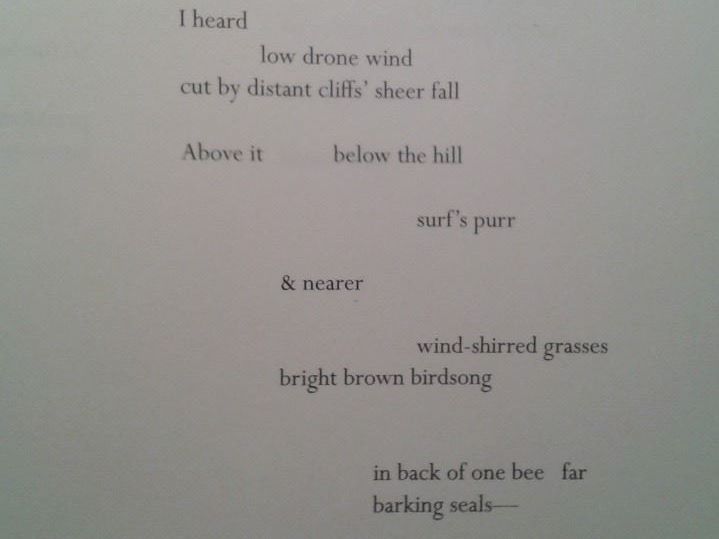 Although she describes it as a mock-ethnographic study, in Wendy Burk’s “Tree Talks: Southern Arizona” series, her interviews with trees document an attempt at interspecies subjectivity. These moments of inhabitory exchange reveal the limits of ego-centricism (the lyric “I” addressing the “you” or in this case “S,” the generic ethnographic subject) and reach beyond them to materialize a relation that is not ultimately human-centered because a tree never responds in isolation:

The above is an exerpt from  "Juniperis monosperma (One-Seed Juniper)," if these poetic documents can be said to have distinct titles.  Ultimately “Tree Talks” begins to answer the question how is humanness constituted vis-à-vis “nature”? Ending with this sketching of place relation, it unites ethnography with geography – with understanding the sociality of spaces. If the human subject is not reconstituted in this exchange, a path toward reconstituting humanness is suggested. “We are the environment,” proclaims environmentalist Dr. John Francis, who took a vow of silence for 17 years, “and how we treat each other is how we are going to treat the environment.” There’s truth to this, and this worries me tremendously.

A few summers ago I undertook an intensive back yard reading of Larry Eigner’s poetry, immersing myself in the shifting sense modalities that construct geographic locatedness. Eigner’s reference to his poems as “a stretch of thinking” compels me to consider the embodiedness of the word “stretch” – and to consider how the sensory “stretch” expands bodily boundaries even as it erases them, or rewrites them. This is a feature in many listening poems, and sensory-intellectual porousness is one form of inhabitant knowledge that poems cultivate. When a poem embraces a range of sensitivities and critiques. I feel assured of something.