I arrived in Moscow in the heat of late summer, as the city began its birthday festivities. From the balcony of a rented flat near Kurskaya station — an apartment on the fourteenth floor but with an interior so dark and freighted that one felt to be living, uncannily, both at a vertiginous height and at the bottom of a well — I watched vast and ornate fireworks displays flaring up and dying out across the expanse of neighborhoods, all night, night after night. The scene was warrish, painterly, and, from such height, near baroque in its excess — the many pleiades of fireworks like civic bonfires, recalling not so much the triumph of historical continuity the festivities intended to evoke but rather the city’s many destructions and recreations. For, after each new shock of ruin or upheaval, Moscow has borne a corresponding wave of reconstruction in which is reified, and reified again, a version of the past to suit the political imagination of the day. Simulacrum as commonplace; a form of “magical historicism,” as the scholar Alexander Etkind puts it. If Petersburg stands to “a sobriety of consciousness and a sobriety of form,”[1] one might vouch for “a madness of vision” to describe the scopics of Moscow, Russia’s other capital — a city for whom the Janus-faced oscillations of amnesia and nostalgia are celebrated, artificially accelerated, and instrumentalized by the state. It’s a phenomenon thematized by Maria Stepanova in her book-length sequence, Spolia, excerpted below:

In her history of repetitions

Simultaneously she quotes it all:

Not for the sake of memory, no —

Only to stop up the holes … 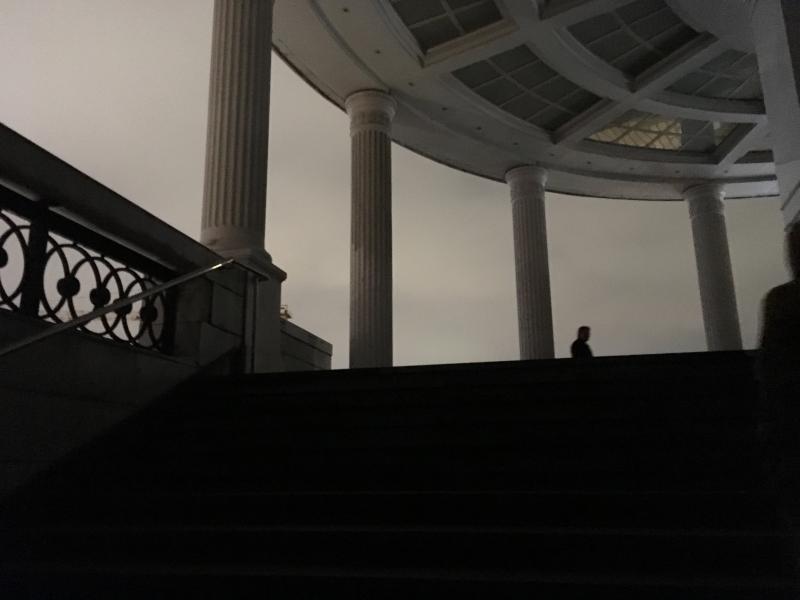 So, in 2018, in a small apartment bowed over by its burden of post-Soviet wallpaper (the nightmare of “Euro remont,” for those in the know), its close rooms overwhelmed by enormous brackish furniture still disclosing a smell of Brezhnev-era nicotine, I watched Moscow — I keep the female pronoun here in accord with the Russian — usher in her 871st year with usual pomp and flame. Now, today, United Russia’s Sergei Sobyanin remains her mayor, and — as he has since the sixteenth century — St. George her emblem, appearing with spectral heraldry on every municipal vehicle, missive, and building. As ever, Moscow absorbs the vast bulk of Russia’s capital, its mineral and gas wealth, its institutional resources, its people, even as provincial cities decline and villages empty. If Moscow is a metonym for Russia, her Argos to the ancient Greek, she could also be understood — as the concentration of Russia’s wealth and power ­ — as a parasitic force for which the whole nation plays host. Again, from Stepanova’s Spolia:

and widewinged sectors of the air her machinery of wool, of milk and steel,

the bolshoi ballet, dancing out of some private stashspot

the spirit of the murdered summer gardens

Paradise asleep in the arms of hell

And Moscow, central Moscow, the Moscow of state, commerce, myth, and literature, is ministered to night and day by a numberless echelon of poorly paid laborers, often migrants from Central Asia and always in the same blue and neon orange overalls — women and men who sweep the city with handmade brooms bound from collected twigs (!), who plant and tend patches of pansies and assure geraniums even in obscure corners; who replace and replace the same patches of bricks in walkways (“washing money,” in the local manner), who scrape ice and snow and debris from the roofs of churches, apartment blocks; who mop and tidy the prodigious ballrooms of Stalin’s metro stations, who climb and crawl in and below and upon seemingly every surface of the central city, and who, on Mayor Sobyanin’s decree, repaint and retouch the once Soviet-yellow old stone buildings with their delicate pre-revolutionary approximations. Thus the Moscow of egglike pinks, yellows, blues, greens, the thin loveliness of candies that have lost their sweet.

But if Moscow is to itself a kind of Nabokovian magic lantern, projecting composite images of its past on the living bodies of its inhabitants, such holographic historical “reconciliation” is impossible for the visitor. For the newcomer, the outsider, Moscow is instead a dizzying nexus of irreconcilable temporalities; the radical unevenness of modernity is displayed in plain view. At one moment, the scene is medieval — a monk with thick beard and harrowed phiz chopping wood in the middle of a birch grove in Sokolniki Park — and the next, fascist-futurist “posthuman” youth in full Gosha Rubchinsky. Near the glass edifice of a high-rise, a woman is holding a book-sized icon, bent in half from a disease that is completely treatable, begging-praying in a low voice; around her financiers bicker on iphones. There is a matron in Soviet-rococo headwear, a young man from Uzbekistan selling pomegranates out of season. Someone is hawking outdated pulp magazines. A middle-aged vet in military fatigues stands at a cheap synthesizer, singing a WWII ballad; on each of side of him a motionless comrade in like fatigues and sunglasses. Shopping malls and apartment blocks are built over Vyatich kurgans, mammoth bones are exposed during construction on the Golden Mile. From tram cars turning sharply on the street below, the sound of scabbards, sparks, of old internecine skirmishes. 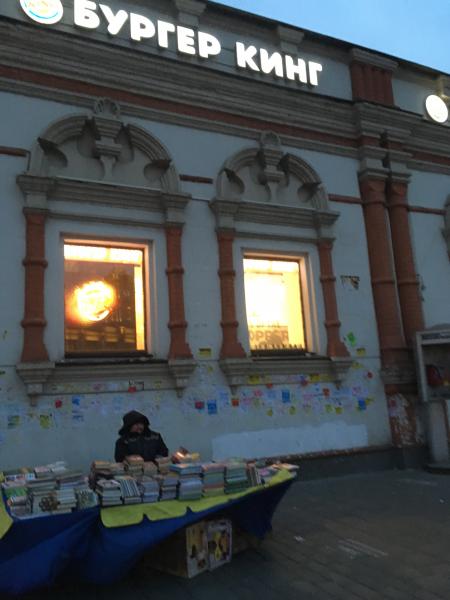 So the Moscow poet Vasilii Borodin wrote in 2012:

all the time in the heart

as though they’re beating it

with a blunt shovel —

as they did Alexander Mien[2] in the head —

almost without direct cause

I remember the wrought iron gates

they set in the center of Moscow —

for a long time eyeing the plumb:

the sun, such moscow sun and shadow-burrows

and the animation in the traffic lights,

in all of them one form

2. Alexander Mien was a progressive Russian Orthodox priest who became a powerful cultural and religious figure during Glasnost. He was vehemently ecumenical and opposed the fascist, anti-Semitic and nationalist elements in the Russian Orthodox  Church. His murder in 1990 — he was bludgeoned with an axe outside his home in the outskirts of Moscow — remains unsolved.