It is hard to express precisely the enormity and gravity of this life’s work — or lifework — because so often experimental work is seen as incidental, one-off, a thing done alongside the more standard work, rather than sustained and lifelong or lived. This extraordinary feat of endurance and persistance was born in part from her suffering from tenosynovitis, as a typist and secretary. Her turn to steganography and Isaac Pitman’s 1837 Shorthand was thus a way of making sense of this disability, and to rethink the practices, pleasures, and intricacies of writing itself. In the introduction to A Loose Thread, Π.O. (see next biography) notes that there is an Australian connection in that Pitman’s brother Jacob Pitman is buried in Sydney with an epitaph “ironically” written phonetically (11). The titles for these works are to some extent the conceptual apparatus for viewing the works which combine several Shorthand words, often phraselike, into a single page of visual space: 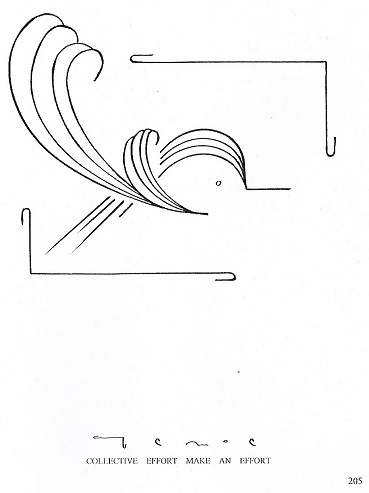 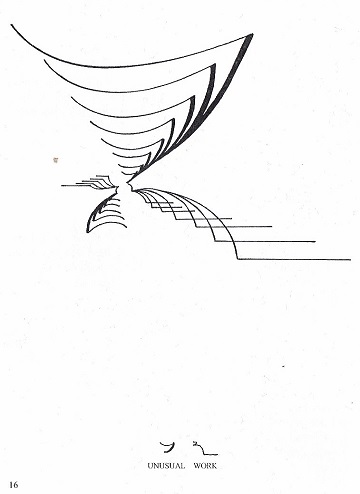 The reader is given the corresponding Pitman strokes/hooks/dots to peruse at the bottom of the page, to assist in making meaning through pattern, and to allow us to take note of each of the components. We phonetically (h)ear the “final” visual shape above. Sound shapes in space, these are scorelike, a form of notational poetics. They are also sociotextual: the references above are to the work of Collective Effort (press) and Unusual Work (magazine), an homage to networks of material support. Other poem titles are “STANDING WARRIOR WOMEN” (143); “GENOCIDE (DEATHS IN CUSTODY)” (131); “EXPLOITATION TURNED AGAINST US” (129).

In her 1998 new & selected poems, some of the lineated poems are about her labour as a typist, her work in Kafenia, cafés of Melbourne, worker intimidation and exploitation, and being a woman and a feminist. A good deal are political protestations (unambiguously “Red” or Red-sympathetic, anarchist, ultraleft, anticentrist). Her bionote reads, “Poetry has armed me. I have had many good teachers — some living. They range from: anarchists, poets, witches, singers, ratbags, writers, unionists, cleaners, gamblers, and communists.” Political overtones are more often than not written into form. There are poems like “Overture” which begin:

Throughout this book and at the beginning of each section there are those abovementioned Shorthand works, bookmarking and bookending thalia’s dedicated — and dedicatory — bookwork. I can only think that, with a poet and visualist like Thalia, one with a devotional sensibility of a kind comparable to artists like Hanne Darboven, Agnes Martin, or Channa Horwitz, hers is a poetry that persists in time, over time, “overPower” (structures); and that because of its utter radicality, its staunchly proletarianist aims, it must last.

[This entry has been removed by the author for further study and revision. Aspects of this will appear in future research in this project].

The life and work of Javant Biarujia is a singular event in the rich history of Australian inventive poetics since the 1970s. Born in 1955, Biarujia changed his name by deed poll in 1978 via his language Taneraic, a langue close (private language) he has been developing ever since. On a website Taneraic on the Web, Biarujia introduces the language:

I describe Taneraic as a “hermetic” language after the style of Mallarmé or Stefan George: a private pact negotiated between the world at large and the world within me; public words simply could not guarantee me the private expression I sought. Taneraic was born of the unconscious (“The unconscious is structured like a language.” — Jacques Lacan); of an inchoate poetic personality; of conflict between artist and middle-class upbringing; of variant sexuality. English, my native tongue, would have submerged me in its long, magnificent yet etiolated history — and prejudices. I needed the immediacy of a marginal language, a creole, so to speak, arisen out of need, and adaptable yet of central importance. A language whose culture was that of a single individual.

Psychosocial as much as a kind of ethnopoesis, we have a complex sociality at work here; language is socially subjective: language emerges from culture, and here culture is compacted into the “single individual” (any consequences outside this are incidental, additional). Aspects of Taneraic appear in his work, and the “immediacy of a marginal language” — plus an entire pantheon of the avant-garde’s original spirits — come together to ghost his body of work. There's a frankly emboldened language of the body that might recall for some readers the works of Armand Schwerner. To Corey Wakeling, Biarujia remarks that the journal Meanjin refused to publish his homoerotic poems in the 1980s. His work has been variously anthologized, notably appearing in Out of the Box: Contemporary Australian Gay and Lesbian Poets (2009) edited by Michael Farrel and Jill Jones.

Another aspect of Biarujia’s work is a turn to ’pataphysics and OuLiPo, or “oulipoetics” as he puts it in an interview with Sheila E. Murphy. Such games of discursive science, scientistic or lingual engineering enable a close attention to the smallest particulars of language, and a way out of, or past, conventions in Australian poetry through recourse (unlikely for some it may seem) to stanzaic forms. His recent book Resinations (Otoliths 2012), is an example of the kind of attention paid to foot, form, and citationality. Dedicated to Pete Spence and in the form of a sort of resin catalogue, the book negotiates a conceptual precipice between varnish and pitch, all down to the res(i)nant body of the poem as notational, or tonally notational (or again as tonotation … add one more, econotation). “GALIPOT” (hard resin of the maritime pine) goes:

The stanzaic form with its strictures, enrhythmed footwork (a broken i amb salvaged from some other word, or gapped), disjunction, and citationality reminds me, if we are to make another USAmerican comparison, of the stanzaic work of Jackson Mac Low. Indeed it’s becoming more apparent in studies of neo-avant-garde poetics that far from merely embracing vers libre, something closer to vers sévère well-encapsulates the practice of some of the most inventive poets mid-to-late century. And what Australian poet so frees up the quatrain to contain more, or to patter a more cadentially condensed, rhythmic foot? In Calques (“VLNCLL”):

their aim to please or displease equally is their party trick

Or these distended, dashed syllabics from “TI TI QA A QI,” resembling in my eyes the ligatures of an ancient tonary:

Lastly I want to say something that emerges, broadly speaking, out of my being a poet/critic, a practioner as much as here, critic. In Biarujia we find an antimoralist, after-(alt-/off-)modernist poetics of sheer linguisticness, a stanzaic emancipation of disjunction. Though this is familiar to poetics, perhaps less to certain kinds of Australian poetry criticism, this must be said: in Biarujia language is no conduit to communicative meaning; there is no nugget of meaning you “get out” of a Biarujia poem. The reader must participate. The reader also must be willing to be astonished by language, and willing to get caught in the static of language (not get “through” it).

Moreover, although this series is loosely based on that foundational work of literary criticism, Samuel Johnson’s The Lives of the Most Eminent English Poets (1779–81), I think Biarujia, doubtless eminent, offers a permissive poetics that leads me to go against such Johnsonianism. Like many of these incomplete poetics-snapshots of literary lives lived in experiment, Biarujia’s eminence derives from his opposition to poetic convention. I have not solved the question of whether the counter-canonising, decanonising maneuvres of the radical critic amounts to a kind of canon-building. For to be truly Johnsonian I would here be selecting lines from the accepted (or enforced) canon and expressing mild moral displeasure at those lines. But this is anti-Johnsonian because I am mainly offering appraisal of lines and stanzas that ward off the displeasure of convention. One needs to emphasize again just how oppositional this work is.

So in no defensive manner, this has been the best aspect of Australian inventive poetries, and is the best aspect of Biarujia’s work: the total abandonment of convention and an embrace of the radical avant-garde and experimental tradition.

* With the current (Liberal-National) government’s attempts to repeal 18C of the Racial Discrimination Act (part of a worldwide refascisation of States) the work of antiracism in conjunction with poetics is more urgent than ever. Or as Ouyang Yu puts it in “Going through the cards” (New & Selected, 107): “going through the cards that kind of australia is dissolved in names like arranga or zareski or chan or ng or pitruzzello or karogiannis or truong or wang or zhang or ouyang or xiao or strangio or asuncion or plousi or petrovic or abdulatiff or kovacevic or de jong or ubaldi or van leeuwen or choy or lista or banitsiotis or teoh or wong or kee or da costa or quattrone or moulin or marafioti or mudrooroo or oodgeroo or ginibi or huang-”