After Christopher Brennan’s 1897 post-Mallarmean experiment, the Musicopoematographoscope, a handwritten, part-parody, part-founding poem in the history of Australian inventive poetics, it is difficult to find sustained instances of avant-garde or neo-avant-garde poetry in Australia. But there is one figure from the postwar period that stands out as coming close to such a representative: Harry Hooton (1908–1961). Hooton was a member of the anarchist Sydney PUSH movement — a leftist intellectual subculture that thrived from the ’40s to the ’70s and gathered loosely around the University of Sydney — and editor of the literary magazine 21st Century. Philosopher, poet, and raconteur, “unjustly neglected,” “forgotten,” “scorned by the literary establishment,” Hooton, who fashioned his own philosophy of “Anarcho-Technocracy” was a “cult figure in Sydney’s libertarian circles,” as the back cover of his 1961 collected poems Poet of the 21st Century put it. Harry Heseltine is similarly prophetic: “occasionally such a figure is suddenly seen to redefine himself at the center and to generate a whole new output of mainstream poetry. It seems possible that Harry Hooton will be relocated in this way … Moving from idiosyncratic isolation to the formative center.”

Relocating such work, or better, historically situating it, bringing it to the formative center, will require a large-scale reconsideration of works that exist outside the conventions of Australian verse. Hooton’s poems themselves are a mixture of speculative sophistical commentary, brash and loud pronouncements, frenzied wordplay, and theoretical exploration (or “theory-poems,” see one of my  favorite poems of Hooton’s, “Directions,” which has been performed by the Australian artist/writer Ruark Lewis). In “Geometry for Beginners,” we begin to see Hooton playing with the geometries of the page. In this complex poem the poetic line comes to be a commentary on the geometric line, and vice versa, such that they become allegories for lines of thought or thinking. The poem begins:

A torrent of puns wade us through citations of Spinoza (“For your theometry, Spinoza, I salute you”) and Epicurus. The poem eventually includes some delightful visual artifice: geometric diagrams that double as social commentary:

Hooton’s references to “Man” and “Mankind” in relation to “machinic” modernity in this and other poems, and some of his ideas on race, are very much of their time, and should be ignored, critiqued, questioned. Yet in Hooton, a poet that inspired the work of another anarchist and the subject of the next biography, Jas H. Duke, we see the beginnings of a neo-avant-garde sensibility before the 1970s, something that, in this subsequent decade, would become a veritable explosion of neo-vanguardist activity particularly in and around the city of Melbourne.

For Anna Couani, Duke was “one of the pioneers of experimental writing in Australia.” For the conventional mainstream, Duke is a figure to fear: if we begin talking about Duke, where will it stop? What happens if, as Heseltine said of Hooton, Duke surges back into the “formative center”? Without Duke, the Australian avant-garde would not be what it is. Duke had a powerful, bellowing voice, and a legendary vocal technique borne of a lifelong stutter; in his own words, “I began writing poetry in 1966. It was the time of psychedelia and Vietnam … I started performing poems as a timid person with a stutter, but the spirit of the times soon converted me into a bellowing bull.” By all accounts, and there are recordings and first-hand accounts to prove it, this most avant-garde of neo-vanguardists was an “inspiration” in the truest of senses, a consummate performer and visual technician, a breathing behemoth whose impact on several other experimental poets at the time, and well after, was lifelong and permanent.

The poetry of Duke is experimental in the best senses: it is a poetry that tests, a poetry of formal and linguistic inquiry, and a poetry of trenchant cultural critique. Though Duke saw the European avant-garde as structured like a church, with key believers and their Messiahs, Duke’s poetry is influenced by (and occasionally critiques) most of the originary avant-garde: Dadaism, Cubism, Concrete Poetry, Suprematism, Surrealism, Expressionism. Returning to Box Hill, Melbourne, from Germany in 1973, having been in England and the USA since 1966, Duke found a different Australia to when he left it, and from then his presence began to be felt in the Melbourne scene. “EVERYBODY has ‘the-first-time-I-saw-Jas-Duke’ story,” writes Π.O. (for a detailed biographical history of Duke’s whereabouts in the 1970s and after see Π.O.’s introduction to poems of life & death [2003])

In several poems of Duke’s we see a poet struggling with the notion of “Australian” nationhood: both as a concept, because of nationalism, and because of the dispossession of indigenous peoples. Duke is a political poet, a protest poet, a poet concerned with the impact of public policy and governance, but all this in the form of the poems themselves. Duke’s politicality is not reducible, that is, to the communicative aspects of the poem alone. Take for instance the poem “SCRATCHTICKET”: 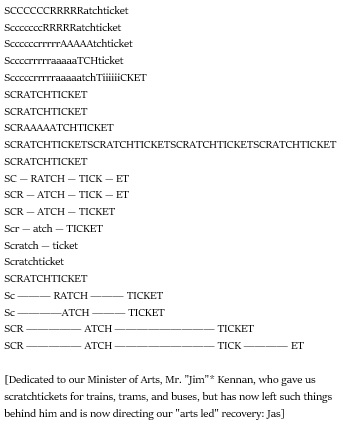 As a sound poem, it is a score for performance — miniscule/magiscule will score volume, protracted lines will put syllables on hold — but a conceptual score as well. It sarcastically critiques the then-Minister of Arts in the State of Victoria on a matter of botched public policy. Sarcasm plays a big part in much of Duke’s political poetry, especially in the conceptual frameworks and paratextual materials for these poems …

Much of Duke’s work can be obtained via Collective Effort press in Melbourne, edited by Π.O., two principle publications being Poems of War and Peace (1989) and poems of life & death (2003) [hear sound work from a CD-insert for this publication here], but some of his work is harder to get ahold of, like his comic-strip/genre-bending novel-play-concrete poetry book Destiny Wood, of Whole Australian Catalogue publications (1978) and Dada Kampfen Um Leben Und Tod, a single-sheet enormous limited edition artist-book Dada “prose poem” of Wayzgoose Press in Katoomba (1996). I was able to see this work when I visited the home of Π.O. recently (laid out several metres across the floor, with classic Dada hand-printed typefaces).

There are few better places to look for a better beginning to an Australian experimentality than Duke; such political-conceptual-cultural-linguistic inquiry, such dissonant, dissident poetic impetus will continue into the contemporary, way into the late- or postdigital moment. It isn’t too bold to say that Duke’s excitable oeuvre will only become more relevant, and urgent, in our times.

If there is a figure who marks a point of difference, a point from which subsequent radical experimenters would find sustenance and the renewed possibility of writing otherwise, Walwicz is that figure. Like two of the three poets I will look at in the next post, Thalia and Π.O., Ania Walwicz, born in Poland, is a migrant poet and performer. Walwicz arrived in Australia in 1963, attended the Victorian College of the Arts, and now teaches at RMIT in Melbourne. In a 1996 interview with D.J. Huppatz, Walwicz described her work as situated complexly in the Australian scene: “there’s very little work like that being done so it doesn’t fit in at all, it’s sort of an anomaly … and yet attention has been paid to it and it’s being studied … so I am part of Australian literature. And I think perhaps in the future this kind of work will be done more readily because someone has already established a position for it to be done.” In another interview Walwicz points out that some have “found the work jarring, too much, or in bad taste … rejected by magazines for being too ‘experimental.’”

Note the similarity, again, with how Hooton’s posterity was described by Heseltine; a recurrent aspect of experimental poetry will be precisely these dynamics of neglect and recovery, of deferred understanding. In Walwicz the key here is a certain kind of difficulty (and, or because of, this pleasure). Described as a kind of “stream of consciousness” (which some might even mistake for certain Steinishness); Walwicz’s poetics is deeply psychotheoretical, highly subjective, but also citational, a “plagiarythmics” of sorts, recycling, reworking, and sampling source material. Some syntactic similarity might be drawn with other Australian poets who work with prose, like joanne burns and Anna Couani. Much of her work looks like prose, and is, and is poetry too, or is both. Some of her books, like Red Roses (1992), are continuous prose without anything akin to chapter breaks. Her most recent work, Palace of Culture (2014), is in fifty parts. Take a look at this page facsimile from her 1989 book Boat: 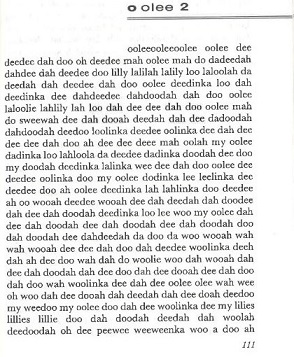 We might observe, not quite out of earshot, but from a certain middle distance, a dissonant prosody in which the bristling, disjunctive layers underneath the smoothly striated surface of long open vowels and lettristic cadences are visually and verbally stressed, grating to d’s and bumping past l’s, through pitched ee’s, oo’s, and ah’s right up to each margin; left, right, north, south, diagonal, our eyes scanning the striations that gap each lexical unit.

Not only the words themselves, I mean, but even the spaces around the words. What Walwicz’s poetry does is reveal to us the workings of language (often with the grammars of Polish superposed on or over Standard English), a sometimes-dissonant, often-disjunctive world where language itself is open to question, particles are subject to segmental drift, mid or between lexemes, and where the book’s page is exhibited before the reader as an object viewed, kan (fourth tone), in Mandarin, looked-at as much as read. This is, to a large extent, the jubilant, scintillating experience of the language of Ania Walwicz.