Poems are bullshit unless they are / Teeth or trees or lemons piled / on a step.

… Fuck poems / And they are useful, would they shoot / come at you, love what you are …— Amiri Baraka 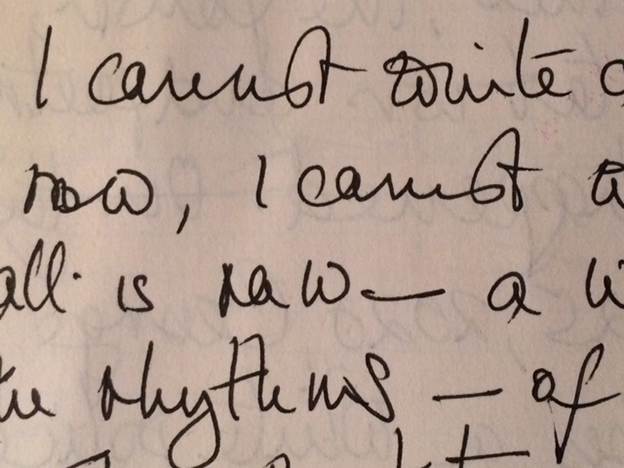 Here I am again, a little over a week later and perhaps more angry than I was when I first wrote to you. Sometimes I see myself as a land mine which someone has just stepped on and if they release we will both be blown. To bits. At other times I’m a hand grenade with a loose pin. It’s odd because I should be happy, given that there has been a cascade of mea culpas from so many, like Anna Wintour of Vogue, talking of “mistakes” made in not hiring Black and African-descended people at the fashion empire she helms; companies falling over themselves to prove how committed they are to doing “something” — anything — about racism; anguished celebrities testifying about their racial sins. Much of it feels false and I remain sceptical. Primarily because I believe systems change to remain the same and to quote Rosa Luxemburg: “What presents itself to us as bourgeois legality is nothing but the violence of the ruling class, a violence raised to an obligatory norm from the outset.”

My question to you, dear friend, is — can we write poetry in extremis, which is where I believe we are at this moment, given the dire situation resulting from a perfect storm of events in which COVID-19 continues to brutalise economies, kills jobs, destroys livelihoods, and squashes hope for so many, despite the loosening up the shutdowns and lockdowns. We in Toronto are still in phase one of that process and we can now meet with up to ten people. The US election looms large some five months down the road with all the potential for ensuing chaos and disruption and, as you know so well, what happens there casts a long shadow over Canada and the rest of the world. Finally, the worldwide outrage sparked by the public lynching of George Floyd continues. I know that as a Catholic in extremis has a particular meaning for you in terms of the liturgy: the Catholic Dictionary, courtesy of the internet, states: In the last extreme. A person at the point of death, when all positive ecclesiastical laws are subordinated to the primary responsibility of preparing the one dying for entrance into eternity.

I don’t know if you’ll agree that that’s where we are — at the “entrance into eternity,” but we are somewhere, aren’t we? And in extremis seems apt, even this more religious interpretation.  Poised on the edge of some sort of transformation, which can go in any of many different directions. Are we performing last rites for ourselves? Is that, perhaps,the role of poetry in extremis?

“So when else would you, should we write poetry, friend?” I hear you say, “if not at the entrance to eternity.”

“You must know that I’m weeping as I write this to you — it is the most meaningful language I have at present, but I don’t know what it says. Whose pain are these tears on behalf of? My own? Our unknown yet beloved ancestors? Those closer in time and, therefore, known, who have passed into eternity?”

“Use what you have at hand?”

“Is that you, Claire? Or someone else — Abiswa perhaps, who always stands over my right shoulder and laughs. Not unkindly.”

I don’t think I overstate it when I say that the conditions under which Black and African people have lived around the world for the last few hundred years, notwithstanding those who have done well, have certainly seemed like an eternity in the more colloquial use of the word. And, since we’re working with and in the colonizer’s language, let’s state plainly that after its origin in the aeternus of Latin, the word morphs in Middle English to mean “things or conditions without beginning or end and things with a beginning only but no end” (my emphasis). The latter meaning leaps out at me, seems as apt a description of the history of anti-Black racism as any — we can trace its source — its beginnings, but it appears to have no end. Does this further complicate my trying to tease out the idea of poetry in extremis? In other words, my friend, are we then, moving from one state of eternity, to another, the transition marked by the present uprising? Akin perhaps to the cyclical time of more traditional, oral cultures that eschew the linear, teleological time of modernity.

Yes, I did heed your suggestion to look to the other meaning of in extremis; indeed, I had already done so when you suggested it and came up with three different examples: “one or two would talk to the press in extremis,” meaning a difficult situation; another: “cannibalism is rare, but in extremis, it is something to which the human species will resort”; and a third: “they suddenly find themselves in extremis twenty miles out to sea — in an extremely difficult situation.” These made me laugh in a sort of gallows humour way — I’m sure you’d agree that resorting to cannibalism in the face of death gestures somewhat towards the more religious meaning of the expression we explored earlier, as does finding one’s self twenty miles out to sea (“drowning not waving”), both of which are leagues apart from a situation in which one might have to talk to the press — in extremis! Which of these examples best applies to the present situation? Cannibalism in the face of death; drowning far out to sea, or talking to the press? 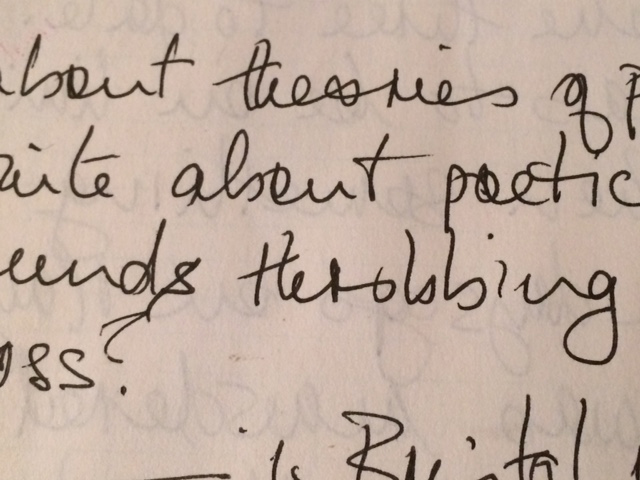 In considering poets writing in moments of disruptive transitions, moments I describe as in extremis, I recall the griot poet, Nikki Giovanni, whose work I came to know in my early years in Canada. Giovanni, a member of the Black Arts Movement, wrote during the Civil Rights era, a time I think we’d agree that qualifies as in extremis, especially if you recall it was also the time of the Viet Nam war. In Renegade Poetics Evie Shockley describes Giovanni as “politically, spiritually, and socially aware, epitomizing the defiant, unapologetically political, unabashedly Afrocentric, BAM ethos (that) reveals an urgency in expressing the the need for Black awareness, unity, and solidarity.” BAM became a repository of literary richness with outstanding poets like Lorde, Jordan, Brooks, Cortez, Sanchez, to name a few, perhaps overwhelming evidence that poetry does, in fact, flourish in extremis.

At sixteen I fell in love with the work of Frederico García Lorca whom I studied as a high school student. Socialist, homosexual (they never told us that) and a member of the avant-garde, Lorca was shot to death on August 19, 1936, for these very reasons, caught in the in extremis of Spain about to convulse into its civil war between the Republicans and the Nationalists. There’s another reason I’m thinking of Lorca at the moment, which is his understanding and articulation of the concept of the duende, which I consider very much an integral part of the African performative aesthetic. The duende is at work when the audience recognizes a particularly skilful calypso and calls out, “Kaiso!, Kaiso!” It also happens in the call and response practices between Black audiences and Black performers. Think of Nina Simone, for instance — a consummate embodiment of duende in her performances. Lorca associates the duende with an ever-present danger as well as with the possibility of death, which takes me back to my first post — not sure if you’ve read it — in which I talked of my own definition of poetry as taking risk and being on a knife edge. Is poetry then, perhaps, in and of itself an in extremis activity, whether or not in extremis external conditions exist?

I have more to say but will pause here for the moment, Claire.

As always, there is

our black robe. Our tock-tock clocks

As always, there is

this hill we climb — (y)our thicket

just is. Was and will be? Y/Our

— Tonya Foster, A Swarm of Bees in High Court

In her essay, “Poetry is Not a Luxury,” Audre Lorde urges her readers, especially women, to see poetry as a necessity, not a luxury. In these precarious times we are stalked by a deadly virus whose modus operandi is stealth; harvesting the old and sparing the young, it culls the poor, the ill, and the racialized, while imposing on us a brutal regime of physical and social separation disturbingly redolent of totalitarian dictatorships. Simultaneously we teeter on the brink of widespread economic disaster, not to mention the looming climate catastrophe. More than ever, we will need to find “places of possibility within ourselves (which) are dark because they’re ancient and hidden,” Lorde writes; places which, she argues, have flourished because of “that darkness.” The darkness she talks about brings to mind the powerful, foundational Ifa deity, Esu, of the Yoruba of Nigeria. Associated with darkness or blackness, which in turn represents the generative power of the womb, Esu represents both male and female qualities, embodying reparation as well choice and possibility symbolized by the crossroads. These are all ideas we will need to engage with in the coming weeks, months and even years. COVID-19 has, indeed, brought us to a crossroad — perhaps to many crossroads. Some may even say, the ultimate crossroad of existence. Others may say that we have already made the fatal choice regarding climate change. Even so, the question remains: what choices will we make in the days ahead?

For Lorde, approaching “poetry as illumination” helps us to “name … ideas which are — until the poem — nameless and formless, about to be birthed, but already felt.” Covidian catastrophes: deep, dark places of light takes its title from those ideas, and will become a container on the journey to my, and our, own deep, dark places using the illumination of poetry.

M. NourbeSe Philip is a poet, essayist, novelist, and playwright. A former lawyer, she lives in the space-time of the City of Toronto. She is author of five books of poetry, including the seminal She Tries Her Tongue; Her Silence Softly Breaks, as well as four collections of essays, including her most recent, BlanK. Her fiction includes several short stories and the young adult novel, Harriet’s Daughter, winner of the Canadian Library Association Book of the Year Award for Children (1989). Her most recent work of poetry is the hauntological, genre-breaking, book-length poem Zong!, which engages with the law, history, and memory. Among her awards are the Pushcart Prize (USA, 1981), the Casa de las Americas Prize (Cuba, 1988), thePrairie Schooner Lawrence Foundation Award (USA,1994) and Guggenheim and Rockefeller Fellowships (USA, 1990, 2005). She has been a finalist for the Dora Award (1999), the National Magazine Award (1998) and the Max and Greta Abel Award for Multicultural Literature (1989). She was awarded the Elizabeth Fry Rebels for a Cause Award for her social activism through her writing. In 2020 Philip was awarded 2020 Pen America Nabokov Award for Achievement in International Literature.

Language under pressure
Shaman/poet/shaman
Going to meet the wave
Death's great black wing
'Mi say mi cyant believe it'
Fuck poems
In extremis
We are many and if not now, when?
Big poems
Conditions of expanse
Algebraic equations of death