Over the weekend, I was north of Belfast visiting a friend in the Glens of Antrim. She took me to see the grave of Seamus Heaney, who died in fall 2013. Those are snowdrops in the picture. The grave is in the corner of the graveyard, with a stone wall on two sides. The sign on the road for it is far more elaborate than the grave itself, which is a simple wooden cross. Not pictured here: the fake plastic roses tumbling on the other side of the wall; the discarded headstones piled against the wall. Some hooved animal had made a print in the earth of the grave. Everyone was going to church, and we were poking around the graveyard. 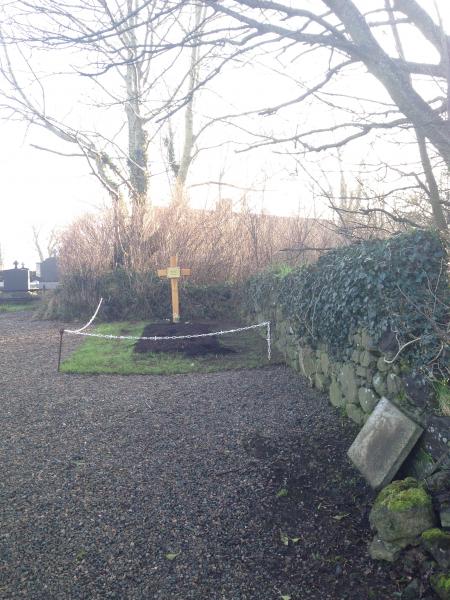 The snowdrops, head down, mimic the posture of one looking at a grave, so that you realize you're in the same position as they are. Neither standing up nor resting flat, but bent over, head tilted downward. The fragile, downcast slant recalls the lowered eyes in Renaissance painting, as in Bellini’s extraordinary Virgin and Child.

The title of Heaney’s final collection, Human Chain, emphasizes qualities not always associated with Heaney’s poetry: dependency and vulnerability. Looking back through his work, it is easy to miss the moments of weakness within the language of powerful assurance (Station Island is one book-length example of the uncertainty and self-criticism that supply the undertones of his entire career). Part of what Heaney saw in W.B. Yeats we tend to see also in Heaney:  a confidence that, when faced with the prospect of poetic failure, he would raise a structure of sound from the abyss. His comments on Yeats’s ottava rima show triumph, sovereignty, mastery. Yeats, Heaney writes, “had written his own oracles to himself and created a fortified space within the rooms of many powerfully vaulted stanzas.” But “in the end the Yeatsian keep of tragic commitment and loyalty is assailed by mutinous doubts about the ultimate value of what there is to keep” (“W.B. Yeats and Thoor Ballylee” 438-9).

In the open, the snowdrop is unprotected. There is no fortified space here, no mastery or sovereign will establishing itself. There is only a tentative hold on loose dirt. Heaney’s poem “Lightenings,” part of the sequence Squarings, includes an anecdote about Thomas Hardy, the great lover of animals. First the poet remembers Hardy playing dead in a field with sheep. Then he corrects himself: “He went down on all fours ... Hardy sought the creatures face to face.”

Their witless eyes and liability
To panic made him feel less alone,
Made proleptic sorrow stand a moment

Over him, perfectly known and sure. (Opened Ground 363)

In the first section of the poem, the poet had seen a beggar shivering in a doorway. There is a “bare wallstead” and a “cold hearth rained into” and a “bright puddle.” In this section, the poet crouches on all fours to look into the panicked eyes of animals. A recognition — not of infinite difference, but of panic, of fear — is shared between the two. So it is that in Jacques Derrida’s The Animal That Therefore I Am, Derrida imagines Nietzsche holding the heat of a beaten horse:

The one who parodied Ecce Homo tries to teach us to laugh again by plotting, as it were, to let loose all the animals within philosophy. To laugh and to cry, for, as you know, he was mad enough to cry for an animal, under the gaze of, or cheek to cheek with a horse. Sometimes I think I see him call that horse as a witness, and primarily in order to call it as a witness to his compassion, I think I see him take its head in its hands. (403)

For Heaney and for Derrida, the poet and the philosopher are the panicked, who see in others a different, but recognizable panic. The snowdrop is a figure of dependency and exhaustion as much as it is a prophet of the spring, the first builder from the thaw. It is the head that hangs, not the strong handshake or the look in the eye. Not the expectation of a saving force that will swoop down. Nothing is about to intercede. No system will respond. Here is the avatar, not of individual strength and sovereign willpower, but of precariousness and care, of dancing in the street and bending the body down to rest. What is here the modest decoration on a grave is everywhere the decorum of a death-in-life.

For this reason the pendant snowdrop, and not the fortified stanza, may be the most believable emblem we have of the exhortation in Heaney’s final words, noli timere, “be not afraid.”