One the real perks of living in Austin is the live music, and in April, I was fortunate enough to see Patti Smith in concert— and even though she is 66 years old now, she was spectacular. After a two hour set (including an encore), I was floored that the original punk-poet-goddess could still embody so much of the artistic anti-establishment energy almost forty years after she first came on the scene. But it also made me reflect on the long relationship between poetry and punk music, and what their intertwined history in the 1970's could mean. 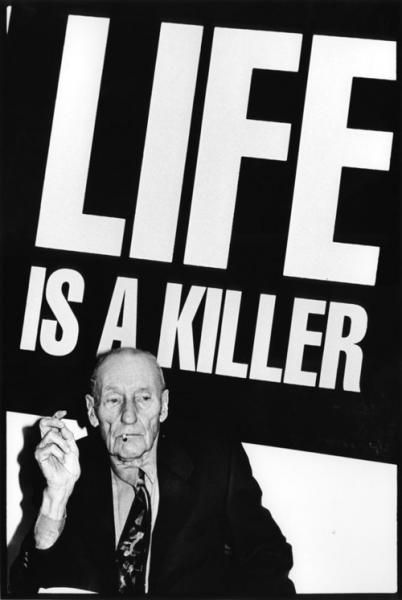 This image of William Burroughs, which comes from the back pages of Please Kill Me: The Uncensored Oral History of Punk by Legs McNeil and Gillian McCain, always stood out to me as the best example of the intersection of the literary and punk. Burroughs' work combines a number of avant-garde compositional techniques (Surrealist automatic writing and Dadaist cut-ups, for example) with extravagant yet realistic drug use, a strong anti-authoritarian stance, the perspectives of outsiders (in the vein of Jean Genet, homosexuals and thieves dominate Burroughs' worlds), and a straightforward “tell it like it is” view of the world—all of which are critical nodes of the music and culture of the early days of punk in the 1970's. “LIFE IS A KILLER” sums up the simultaneous despair and triumph not only of Burroughs' own Naked Lunch, but punk albums such as Richard Hell's Blank Generation.

And, of course, William Burroughs served as a mentor to many of the young punk musicians in New York, and the intersections between poetry and punk were not just artistic, but personal. Allen Ginsberg has his poem, “Punk Rock You're My Big Crybaby,” and a humorous story about meeting Patti Smith, and serves as a testament between their crossed paths. The poets and the musicians were moving in similar circles in lower Manhattan, and the resonances are still felt today, as the recently-defunct Bowery Poetry Club described its location as being in the shadow of the former location of CBGB's.

So why meditate on punk music? Because one of the real treasures in PennSound is the full album recording of Chinas Comidas: Live and Studio Recordings, 1977-1980, which was published by Exquisite Corpse Records in 2006. This album consists of 19 songs by the little-known Seattle punk band consisting of Rich Riggins, Brock Wheaton, Mark Wheaton, Dag Mitskog, and the titular vocalist Chinas Comidas—a pseudonym of the poet Cynthia Genser, who has also published since the 80's as Cynthia Kraman. Kraman's fourth collection of poems, The Touch, was published in 2009.

Chinas Comidas combines some of the best sounds of hard/loud/fast punk music (it's obvious why they opened for The Ramones and toured with The Dead Kennedys) with the intense poetic lyricism of Patti Smith. For example, here are the printed lyrics for the opening song on the album, "Isadora": 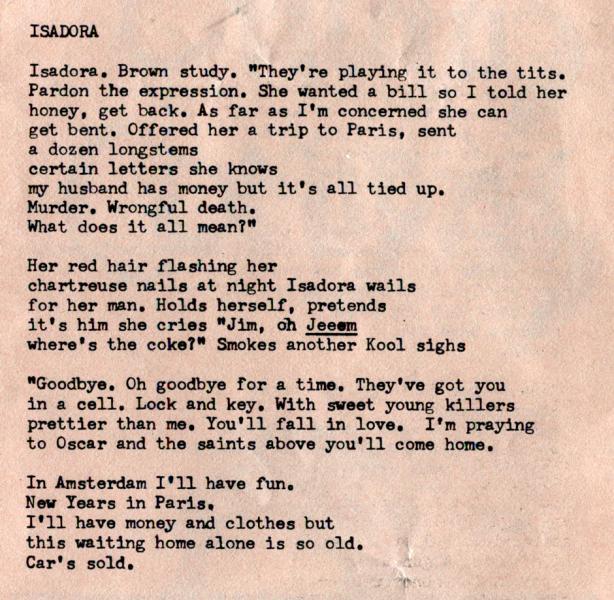 The song eschews the more simple and repetitive song writing of "Blitzkrieg Bop" for a more complex contruction of setting and dialogue that reflects the urban despair of some of Burroughs' work. The anguish of waiting for the lover's return is textured with cocaine, modern commerce through cigarette branding, hopes of international travel, and murder—the great pulp crime of 20th century metropolitan intrigue. Kraman considered the album its own sort of complete publication as well—one that intersects with literary culture. As she says in the liner notes:

I want the CD to have a sort of sound trajectory, regardless of when or how it was recorded. —it's more of a semiosis of language and sound — moving from one sort of drama rhythmically and texturally to another that offsets it, enhances it — I was always big on order. So it's “the many moods” and sounds of Chinas Comidas, interwoven. For me Isadora is very personal and intimate...then we move into dance rhythms with Sweeter, then keep the dance thing but in darker tones with Criminal Cop, goes back to traditional dance, goes back to the long poetic riffs of Isadora with Johnny Guitar and then bang, the whole heavy Peasant/Slave chorus. So that's one cycle for me. Then we go back to pogoing with Big Ideas, back to the long poetry riff with Pride and Joy and For the Rich completes another cycle with another kick ass song, That's sort of Part I; Protection Racket/Stroke/Further Lines for Pretty Boy Floyd/Cowboys is Part II which for me is all Wild West youth sex taking acid that whole thing. Part III is my poetry work with Rich, Rich's musical work with the band, and then a sort of coda with Dag singing the Sonics classic The Witch. then wrapping it up with B side of the first single Lover/Lover, and then a little dance tune that celebrates the fan as a closer: “Snaps.”

My hope is that this underappreciated album will give you something to rock out to over the week. There are a number of complete albums on PennSound that originally were published on LP/CD. The most famous of these is Allen Ginsberg singing The Songs of Innocence and Experience, which was profiled by PoemTalk in episode number 4. I will feature more of these full albums over the course of the summer, so stay tuned.

I first joined PennSound in January 2010, and in the three and half years since then, I have processed an unbelievable amount of material through the site. Not only do I continue to add to the ever-expanding MP3 collection, but my time with PennSound saw the introduction of new MP4 capabilities to our servers, and an expansion into video collections as well.

Some of these audio and video recordings you might remember from the New At PennSound sidebar on the PennSound home page. Collections, series, special events, and individual readings came and went in our sidebar, with the cream of the crop getting longer descriptions in the PennSound Daily. I want to revisit and reflect on some of these items from my time at PennSound, as our overall collection has grown, and poets have more recordings on the site.

But, more importantly, I also want to revisit some of those recordings that might have slipped under the radar. Recordings that were impressive or influential to me as I processed them, but that may not have gotten the attention they deserved. These "Notes from PennSound" are not just for the poets that most people listen to when they visit PennSound, but an attempt to unearth some of the smaller and lesser known recordings. PennSound is a treasure trove of material, and it's time to dig in.

Jeff Boruszak is a graduate student in the English Department at the University of Texas at Austin, studying contemporary poetry and digital poetics. He is an Associate Editor for PennSound, and a 2010 recipient of The Kelly Writers House's Bassini Writing Apprenticeship.