Thanks to the scholarly sleuthing, the archival negotiating, the digitizing, the uploading and filenaming, and the context-setting of Chris Mustazza, PennSound is now adding eight audio recordings of Harriet Monroe — the founding editor of Poetry and one of the crucial figures in the editorial acceptance and promotion of modernism in the U.S. — made in 1932.

A few days ago, the Poetry Magazine Twitter (@poetrymagazine) tweeted a rather simple link to an excerpt from their February 1964 issue, featuring six poems by Larry Eigner. Tweeting links to poems in old issues is fairly standard practice for @poetrymagazine, but the Eigner feature made me think back to some of the truly great video features on PennSound: The Larry Eigner “Sacred Materials” recordings, and The Cloud House Poetry Archives, which was generous enough to make these recordings of Eigner available.

The “Sacred Materials” consist of three videos: the last public reading given by Eigner on November 17, 1995 (he would pass away a little over two months later on February 3, 1996); the Jewish Ground Ceremony for Eigner on February 6, 1996; and a tour later that day of Eigner's Writing Environs, which shows the mountains of manuscripts surrounding Eigner's typewriter where he painstakingly composed his poems.

Nicholas Joost had been a Chicago-area professor and, for several years in the early 50s, was an associate editor at Poetry magazine. After a while his main interest became The Dial, the avant-garde magazine whose heyday had been the 1920s. Eventually he would write several books about the Dial but first, from 1956 through 1960, he helped prepare a major exhibit on the Dial put on at the Worcester Museum (in Massachusetts). Joost's manuscripts (at Georgetown) include correspondence of the late fifties and they seem (to judge from the finding aid) almost entirely taken up with the Dial exhibit. I haven't seen the exhibit catalogue for the show, which opened in '59 and ran through part of '60, but I'm soon going to be in touch with the folks now at Worcester, get a copy of the catalogue and find out what institutional records they have kept. I've long been curious about specific reasons why the 1920s were so much the rage in the mid and late 1950s, why specifically Fitzgerald's fiction had such a comeback, why American modernists circa 1925 was of such great interest. This Dial show and its reception will, I think, give me some further clues.

There isn't any conflict of interest between the universities and POETRY. Quote, unquote. 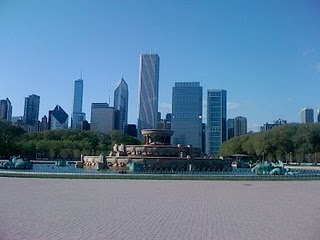 Splendid day in Chicago yesterday. Began it with another run along Lake Michigan. Then down to Hyde Park early to record an episode (for later release) of PoemTalk. Don Share (senior editor of Poetry), Judith Goldman (on the U of C faculty, in the Society of Fellows) and David Pavelich (modern poetry bibliography in Special Collections at U of C) - poets all three - joined me to talk about a pair of poems: H.D.'s "Sea Poppies" and Jennifer Scappettone's "Vase Poppies." (I've written a little about this pairing earlier here.) A very good session. I begin to realize that a keen choice of poem (or poems, as in this special case) enables the conversation almost automatically (that is, with little effort needed on my part as moderator). During an hour or so between PoemTalk and the Modern Poetry Symposium sponsored by Special Collections, I met up with Brandon Fogel, a former student of mine at Penn and now, with Judith, a faculty member of the Society of Fellows. Brandon's field is philosophy and physics (not just the idea of physics in some squishy history of science sense, but real hard-sci physics). As an undergrad at Penn he majored in English and physics, the only student to do so in my 25 years at the university. Unsurprisingly, the gang already surrounding me knew Brandon, so it was a confab. Then to the conference.

Garin Cycholl gave a wonderful paper on the poet Sterling Plumpp and jazz geography; I don't know much about Plumpp so I was being well schooled. Stephanie Anderson, a doctoral student here at U of C, then gave a talk on Chicago magazine, which Alice Notley edited during her several years here in Chicago in the early 70s (and also a bit afterward--when she and Ted Berrigan were in Europe). Paired with the Notley paper was Nancy Kuhl's on Margaret Anderson and The Little Review. Both these papers made use of fabulous rare materials. Nancy is the curator of poetry collections at the Yale American literature collection at the Beinecke. (I'd corresponded with her in recent years about the various manuscripts I used to research and write Counter-Revolution of the Word but had not met her until yesterday.) Nancy is also a fine poet, as witness The Wife of the Left Hand, a copy of which she gave me yesterday.

The Alice Notley/Margaret Anderson pairing - thank you, David Pavelich - was inspired, suggesting all kinds of things about the terms "editing" and (versus) "curating"; raising questions about young avant-garde women who find themselves at the center of a writing scene ("enabling," etc.). Notley very consciously sought to do all this without much help from Berrigan, and after she gave birth (fall '72?) he guest-edited one issue of Chicago--producing a very different choice of poets. Stephanie suggested that Notley meant to show this difference to their friends and colleagues, to prove, in a sense, that the other issues bore no trace of Ted's hand. 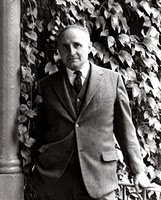 Don Share (he of the equanimous disposition and wonderfully sure, calm voice--a "radio voice," as they used to say) and I gave a pair of papers on the editorship of Henry Rago at Poetry: 1955 (when he took over from the zig-zaggy Karl Shapiro) to 1969 (when Rago suddenly died of a heart attack, not long after an apparently final retirement). My take, in short, is that 1955-1960 is a mixed record for Rago and Poetry at best, and that in 1960 or so Rago caught some fire. Don didn't disagree with my division of the Rago years into two, and he was nicely able to elaborate on all sorts of particular matters of editorship. During the discussion afterward, we began to talk about the special burden - given its special legacy of modernism - facing any editor of Poetry, and got close to a full-out conversation about the situation of Poetry today...when time ran out. But the topic had been raised (what do the failures of Rago's first four or five years teach us?) and it was very good.

After just a few minutes with Nancy Kuhl I remembered that I read (at the Regenstein, in fact; in the Poetry archives) about Lee Anderson's recordings of modern poets--recalled that Anderson (in the late 50s?) was preparing to give these recordings to Yale. Nancy of course knew about the Anderson recordings. There they are, still at Yale. Might it be possible for us at PennSound to collaborate with our pals at Yale to make available some of these recordings? You can be sure we'll be on the train to New Haven soon to discuss. 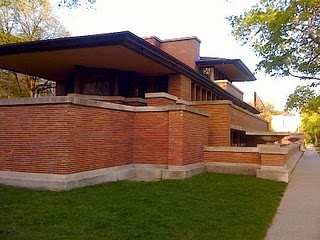 On the drive from Hyde Park to Chinatown for dinner last night, we passed by Frank Lloyd Wright's Robie House. The horizontal flat stone thing looks so utterly natural in its urban prairie setting. I was a little shocked by this. I can usually see architecture in photographs and get it sufficiently; but Robie House needs to be seen as it is, just there, on a residential corner in this sweet little university town on the flat south end of its broad-shouldered city.

ABOUT: This event is free and open to the public. The Special Collections Research Center (SCRC) at the University of Chicago Library welcomes you to the third annual Chicago Poetry Symposium, a yearly conversation on the history of Chicago poetry. Held in the University of Chicago Library's Special Collections Research Center (SCRC), the event highlights the SCRC's strong archival and book holdings in the history of Chicago poetry, including the papers of Harriet Monroe and her Poetry: A Magazine of Verse, Paul Carroll, Chicago Review, Flood Editions, Ralph J. Mills, Jr., Michael Anania, and others. 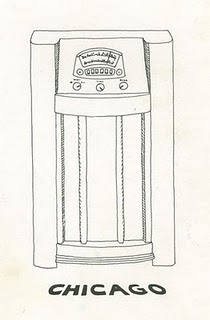 "It was very south": the Geography of Chicago and Mississippi in the Poetry of Sterling Plumpp
Garin Cycholl, Instructor in Creative Writing, University of Chicago, and author of several books of poetry
Phil Jenks, poet, author of My first painting will be "The accuser" (2005) and On the cave you live in (2002)

Making No Compromise: Margaret Anderson and the Little Review
Nancy Kuhl, Curator of Poetry for the Yale Collection of American Literature at the Beinecke Library

Slow Music: The Two Eras of Henry Rago
Al Filreis, Kelly Professor of English; Faculty Director of the Kelly Writers House; Director, the Center for Programs in Contemporary Writing; and Director of PennSound; University of Pennsylvania

In November 2016, Jacket2 published remembrances of Benjamin Hollander (1952-2016) by Joshua Schuster and Steve Dickison. Now we are adding three new pieces about Ben: a memory of his teaching, by Edgar David; a eulogy given by Murat Nemet-Nejat; and an excerpt from a review-essay also by Murat.

Note: In November 2016, Jacket2 published remembrances of Benjamin Hollander (1952-2016) by Joshua Schuster and Steve Dickison. Now we are adding three new pieces about Ben: a memory of his teaching, by Edgar David; a eulogy given by Murat Nemet-Nejat; and an excerpt from a review-essay also by Murat. —Al Filreis

A Recollection of Ben Hollander's Teaching