This commentary is called Sydney gurlesques, no it's called Stewart and Gomez in performance, no wait

Female names dominate the dedications and acknowledgements of Emily Stewart’s book of poems, Knocks (Vagabond Press: 2016). The closing sentence of the acknowledgements section? “girl poets everywhere: this is for you.”[1] To read Stewart is to be in the company of women. The launches of Knocks have so far embodied this sense of a poetry girl gang. In Sydney, it was launched by Pam Brown, with readings by Elena Gomez and Holly Isemonger (August 14, 2016). In Melbourne, it has been launched by Fiona Hile, with Jane Gibian, Ella O’Keefe, Leah Muddle and Melody Paloma (September 17, 2016).

At the Sydney launch of Knocks, in Frontyard, Pam Brown’s launch speech described the way Stewart "garnished" her modernist influences with "feminist influence like, say, the gurlesque," offering in her work, campy visceral experiences of gender.[2] Arielle Greenberg originally developed the term in a talk in Small Press Traffic in 2002, describing a poetics that is "emotionally vulnerable but also tough, with a frank attitude towards sexuality and a deep, lush interest in the corporeal," a poetry that is "'dolled up' in a specifically girly kitsch."[3] An example of Stewart inhabiting this mode is a poem like "Always the Bride," a poem Stewart often selects at poetry readings:

For my third wedding I used disposable plates
and let the children fuss about the seating
arrangement. My free returns coupon dress
arrived lacy, black, in every way the doll fit. (35)

Stewart's lines luxuriate in the hyper-femininity of the bride, of a bridal dress that is lingerie-like, of buying and returning dresses and husbands; describing a wedding experience that’s bizarrely cheap, easy, sexy and fun.

"Always the Bride" isn’t a representative poem from Stewart’s collection, and it's impossible to pick one. Stewart is a poet preoccupied with the environs of the digital, of the urban, of the page, and her work moves between Bunnings Catalogue reworkings, David Attenborough citations, internet comments and erasures of works by Virginia Woolf, Helen Garner, Diane Ackerman, Susan Sontag, Clarice Lispector. Michael Farrell notes in the blurb, "There is more than one poem here, thank the Lord."

At Stewart’s Sydney launch, Elena Gomez read a poem directly written in response to Knocks: from one gurl poet to another. Gomez introduced the poem as being written "for, or after, to, or at Emily." If Gomez’s preface to the poem offered it as a series of options and oppositions, this was continued more emphatically in the poem’s title: "It’s called Happy 51st Birthday to Viola Davis, no it’s called I already used all my mystic energy, no wait," Gomez paused, "it’s," she paused again, "a granite block nearby covered in discarded tea towels.” Gomez’s cataloguing of possible titles could be a reference to the varied concerns of Stewart’s work, among them, perhaps, performance, glamour, femininity, soft environments and domestic detritus.

At the same time, through framing her reading with multiple prefaces, then multiple titles, Gomez herself presented a carefully calibrated presentation of a hesitation - of even breakdown - that perhaps we could call gurly. In other words, Gomez responded to Stewart’s camp performance of femininity with her own glorious gurlesque of a crisis of poetic uncertainty, an uncertainty, which, through a listing of possible prefaces and titles, opens up  incongruous combinations and possibilities. Lara Glenum identifies how Gurlesque poets, with humour and pleasure "enact signs, bodies and psyches in crisis."[4] Gomez, in her disruptive, hilarious, faux-naivetie, was echoing also, perhaps, Liang Luscombe's cover art for Stewart's book, which quotes Linda Marrinon's famous 1982 painting "SORRY!": a work which inhabits a faux-naive feminine self-deprecation. Brown noted in the launch how Stewart's poems carry "something of the initial disruptive intention of Linda Marrinon's statement." The same could be said of Gomez's (and for that matter, Isemonger's poetics). 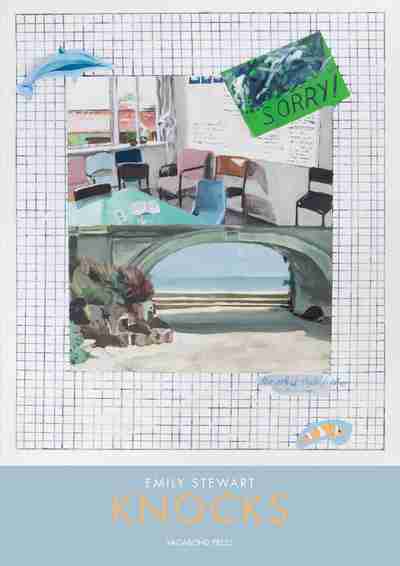 Though Gomez's poem was written "for, or after, to, or at Emily" it is continuous with a practice that frequently draws attention to her writings as contingent objects (see for instance, the title of Gomez's essay ‘HOW I STARTED WRITING AN ESSAY ABOUT “SIDE EYE” BUT THEN COULDN’T AND THE ESSAY IT WAS INSTEAD’). To write something is also to not write something else.

To read something is also to not read something else. On the 18th of September (like the book launch, also in Frontyard) as part of a reading event with SOd Press, Stewart offered what she called a “misreading” of “Always the Bride.” She read the lines in reverse order:

arrived lacy, black, in every way the doll fit
arrangement. My free returns coupon dress
and let the children fuss about the seating
For my third wedding I used disposable plates

In Stewart's experimental "misreading" (Miss reading?) of "Always the Bride," the poem's body falls apart and turns in on itself. The pauses Stewart made between the lines underscored the difficulty of reading from the bottom of the page to the top, a subversion of the established order of lines, and poetry reading routines, that also inevitably opens up a score of fractal possibilities (if upside down this time, sideways next time? then diagonally?).

I want to join the gurl band that Gomez, Stewart, Brown and Isemonger are in: reading together, remixing, experimenting, combining.

3. Arielle Greenberg, "On the Gurlesque" Small Press Traffic. The article was written in April 2003 based on an outline for a talk delivered at Small Press Traffic as part of the New Experiments series in November 2002. See also Lara Glenum's "Welcome to the Gurlesque: The New Grrly, Grotesque, Burlesque Poetics" (2010) in this magazine.

4. Lara Glenum, "Welcome to the Gurlesque."

Sydney reading experiments: Poetry in performance is a series of micro commentaries, documenting readings and performances within the Sydney experimental poetry community. How are difficult, unreadable, "avant-garde" poems vocalized and embodied in Sydney specifically?

Amelia Dale teaches at the University of Sydney. She is the author of several online chapbooks of poetry, and co-editor (with a.j. carruthers) of SOd Press and poetry reviews editor of Southerly Journal. Recent work can be read at Powder Keg Magazine, Cordite Poetry Review and Troll Thread.

http, Ouyang and Yu
Let's take a quick break, actually: Eddie Hopely in performance
This commentary is called Sydney gurlesques, no it's called Stewart and Gomez in performance, no wait
Before um we begin
I've been in this room before: Astrid Lorange