Clubs and Societies is the latest project of Sydney-based poetry organisation The Red Room Company. Last weekend I saw some results from this project at the Melbourne Writer's Festival. The concept is to link a poet with a club or society, and to commission them to write a poem about this contact. The two examples on display were poets Ali Alizadeh (assigned the Existentialist Society) and Omar Musa (Motor Gliding Club), who performed their poems at the event. The brains behind such Red Room schemes is Johanna Featherstone, who MC'd. What was fascinating beyond the novelty of bringing the existentialists and motor gliders into the context of poetry and the Writer's Festival, was seeing poetry framed and produced for a select audience, and being able to observe the reception of the poems. 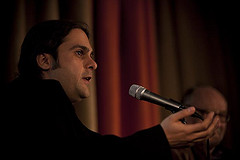 We heard from the clubs and societies' representatives, and we heard the poet's impressions and what they did with them in a poem. There was a time-stopping moment when the guy from the Motor Gliders made a 'joke' about someone with a name like Omar crashing a glider into a building. Featherstone deftly rebuked him, saying 'they were more used to poetry prejudice than racism' and the night continued. Alizadeh's poem was framed in a narrative, of going to the society to hear them debate about 'Love'. And in a sense these were conceptual love poems performed for the men beside the poets. They were gift poems, on topics dear to the 'fanatic or afficionado' (as described on MWF event description). We could see (what I read as) both pleasure and bemusement on the poems' recipients' faces. 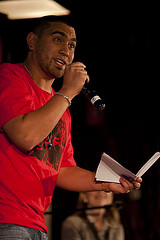 While Alizadeh, who had his own take on existentialism (not to mention love), was on relatively firm ground, to make a bad pun (puns being best reserved for poetry really), Musa's poem was a reaction to his first experience of motor gliding (meaning a motor is used to get the glider into the air, and then turned off). As I heard it then, Musa's poem was not so much a representation of an afficionado's experience, which presumably is fairly relaxed, but a rather anxious, first-timer's one. I heard a mounting tension in the longer line attempts at something poetic - and then - what worked much better poetically, Musa's list of short lines: such as 'the air', 'the swoop' etc.

Finally, I want to mention something curious: which is the anecdote told by Phil from the Motor Glider's that described his reason for agreeing to the poet's involvement. He said that though he had no other poetry in his life, he had an aunt who'd memorised Banjo Paterson's The Geebung Polo Club (weirdly another club poem), and that he later memorised it to read it to her during her dementia.

There was something satisfying in hearing poems written for others (and of course, in a secondary way for us as well): but in understanding not the poem, but rather how and why it was constituted for a primary audience, and witnessing its reception at that moment in Melbourne CBD, 2011. Yet, as the Banjo anecdote proved, it wasn't so far from something that could have happened in 1893.

Fitzroy is the Melbourne suburb where I read Australian poetry from and in. Where I write these posts - a series of thoughts on what seems current, energising about Australian poetry, with no doubt, a Fitzroy bias. I won't preempt what might be coming too much, but expect excursions into [art], books, magazines, poems and poets (how generic)!

Michael Farrell has published books with Merrijig Word and Sound Co., Vagabond, Salt, 3 Deep, Giramondo, Puncher and Wattmann and Book Thug: respectively, whale diary, living at the z, ode ode, BREAK ME OUCH [cartoon poems], a raiders guide, Out of the Box: Contemporary Australia Gay and Lesbian Poets [co-edited with Jill Jones], and thempark. thou sand is forthcoming from Tinfish. He has read his poetry in the usual venues in Australia, as well as usual and not so venues in Ljubljana, Japan, Czech Republic, Paris and San Francisco. He has collaborated with Melbourne artists Spiros Panigirakis and Ardi Gunawan: an detail of Ardi’s  ‘Skylight’ is featured on the Commentary banner (image courtesy Gertrude Contemporary Art Spaces). Contact Michael: limecha@hotmail.com.