Amaris Cuchanski hosts the twenty-second podcast in the PennSound Podcasts series. This includes a brief introduction, followed by a 21-minute excerpt from the conversation between P. Inman and Dan Farrell that took place at the Kelly Writers House on November 29, 1999, the 14th PhillyTalks event curated by Louis Cabri and technically produced by Aaron Levy. Click here for the entire recording, including links to audio segmented by poem; you'll also find a link to a PDF copy of the program that had been distributed by Cabri before the event.

On February 10, 1999, at a PhillyTalks episode featuring Heather Fuller and Melanie Neilson, Nielson mentions Fuller's "pretty gutsy" tendency to refer to artists in her writing, such as Claes Oldenberg. Here is Fuller's response: 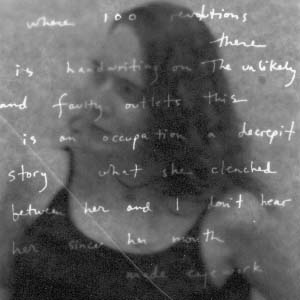 'The really intriguing thing to me about Oldenberg is he was such a public figure. Everything for him was so hyperbolic.  His sculpture sort of was upon you before you were even close to it.  In a sense he was really holding court in a very public way with whosever was in eyeshot.  It's often funny to me to think of Oldenberg in relation to, say, the person who is going to be uttering the line, in "hearsay", about the splatter guards from the civil disobedience unit of the police.  To what extent is the splatter guard holding court?  What extent is Claes Oldenberg forcing court upon us?  These are all very public and visual elements that sort of force themselves into our space.  And so, often there's a disconnect between these very forceful and—the word "power" you used, power—powerful elements and people who will perhaps not be reading this text.'