The vestiges of poetics

Post-ecopoetics is about the art of writing and reading through a damaged ecopoetics. It is the art of writing and reading when we still had summer arctic polar ice and most of the world’s coral colonies. Part of the inspiration for this project comes from Donna Haraway’s new book Staying with the Trouble, where she calls for “arts of living on a damaged planet” as a way to begin to confront the Anthropocene and focus on making its tenure brief. How might we live, and support the lives of others, while changing our language, our writing, and our consciousness of the present in order to understand the precarious condition of our planet?

Right now, the political winds are shifting and swirling, gathering dark clouds. The rise of bitter nationalisms and snarky declarations of the triumph of self-interest have given permission to many to feel good about giving up on the global good. I’ve seen people tear up hard-won institutions intended to build better things one day, but I’ve never seen such cynical demolishing at this scale. It’s not that environmentalism has had any easy answers for how to live up to the global good, but it relentlessly believed in the commons and the notion that whole planet was, to use Darwin’s words, akin to an entangled riverbank. If national parks were environmentalism’s first great idea, a good follow up was the commitment to the vision that we have only one planet and we better take care of it and figure out how to share it.

The purpose of this commentary series, however, is not really to itemize all the distressing things happening on Earth and point poetics in that direction. While I see post-ecopoetics as driven by the need to document, assess, and respond to the devastation to environments and environmental institutions, I do not want to exclusively focus on damage reports or defeatist sentiments in this series. What I’ll be doing here primarily is assessing what is happening to poetics/ecopoetics in our time. My main emphasis will be on documenting and describing how our poetic devices and figures we use to understand ourselves, our environs, and the planet, are showing palpable wear and tear. Yet I also see so many great poets making astonishing poems out of such worn, crisis-prone, and half-functioning devices that care for us all.

Post-ecopoetics happens in the recognition that canonizing or moralizing environmental poetics need not always take pride of place. One complaint that I’ve often heard levelled against ecopoetics is that it focuses too much on green content and moralistic behavior. My quick response would be to indicate that greenness and ecological virtues are just some of the tools in the toolbox that ecopoetics might use. Yet another charge is that ecopoetics tends to be swept up into instrumental or utilitarian agendas that channel writing and reading into some cause external to the work. Once a poem gets attached to such a cause, supposedly writers and readers reduce the poem to thematic and representationally driven preoccupations. What these points miss is how representation or even expression can be gateways to all sorts of nonrepresentational effects that resonate in strange and compelling ways only because they have gotten a foothold in the sensorium.

Here’s the thing: there are no poetic devices, forms, materials, and lineages left unscathed by contemporary planetary turmoil. In my previous post, I described art in our present day as Eaarth Art — a term I would apply to all artworks today, not just environmental art. All the materials we use to make and share poems, from paper to computers, have question marks hanging over them: Are they extractivist? Are they working anymore? Who labored for them? How long will the worlds they build be possible? What happens when they outlive their purpose and are junked? As for assessing our poetic figures, I would suggest that we re 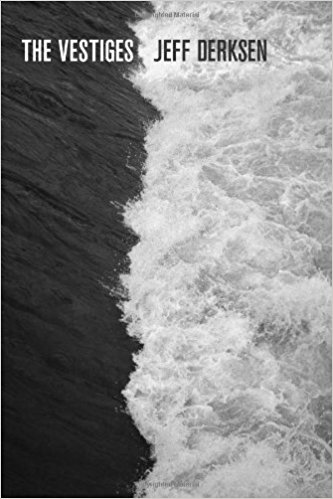 turn to that great modernist/avant-garde device articulated by Shklovsky of defamiliarization or “laying bare the device” as involved in showing the means of production of one’s ownart embedded in planetary problems and processes. Today, laying bare the device includes showing the origins, uses, and end lives of the material, aesthetic, and psychological means that comprise the entangled banks of the poem.

I think there is a further level of exposure we need to discuss with regard to our poetics. In the frame for these commentaries, I claim that all our poetic devices have become existential, by which I mean that a significant feature of many poems is how they inquire about whether or not they will continue to exist at all. Nothing guarantees that our poems – or any poem for that matter – will persist, be read, or even legible over time. The longevity and destructibility of address haunts all poems. But especially today, what post-ecopoetics shows is a special attention to recognizing how the condition of poems is to be aware that there may be a condition of no more poems.

In this commentary series, I will take a closer look at different kinds of post-ecopoetics, but briefly I want to offer one example here. Jeff Derksen’s The Vestiges (Talonbooks, 2013) includes a set oftightly composed poems, often employing different constraints to generate text, that splice together the centers and margins of extractivist capitalism. A number of poems are made from culling all the parenthetical remarks in a number of classic leftist texts. Collected from Silvia Federici’s Wages Against Housework, the poem becomes:

(The magic words:
“Yes darling, you are a real woman”)

(Until recently airline stewardesses in the United States
were periodically weighed

The gender and class struggle as taking place in punctuation. Pairing the devices of found poem and parenthesis has the effect of laying bare each other. The parenthesis are a mode of address set aside from itself – and that phrase is also another way of defining poetry more generally. When other parenthesis appear in other poems in the book, the sensitivity to these devices is heightened:

Isn’t that the state
how it relates
to hollowed-out spaces?

In loco parenthesis: these are hollowed out spaces too. Derksen’s book shows how all our devices have become vestiges of themselves. But that may be the only way they can have some sort of broken solidarity with the vestiges of capital, the state, and nature. But that’s a solidarity that brings us to the edge of post-ecopoetics. So in that spirit, what I’ve done here is collect all of Derksen’s own parentheses in his opening poem “The Vestiges” to start a new poem:

(history teaches)
(“Downtown! Things will be better when you’re…”)

(Greenspan)
(which were arbitrary for throwing)